We’ve all heard the platitudes about loving only that which we know and it couldn’t be more true—or emphatic—than with our wildlife connections and commitments to wildlife conservation.

With a considerable background in wildlife and conservation education, I’ve given serious thought over the years to just how people not only become hunters but also how they become connected to, develop interests in and commitment to wildlife. To my way of thinking, one of the most integral components is interaction—opportunities to observe, touch and contemplate nature and critters.

Of course, that interaction takes place in hundreds of ways, thousands of places and under a magnitude of conditions. But the key, in my mind, is those little of sparks of recognition, understanding, vision and insights into the interconnectedness of all living things that come with the collection of our interactions.

One of my earliest recollections of interacting with wildlife was as a rambunctious toddler, in diapers as I recall, chasing a frog along the little ditch that ran alongside our house in Sandy, Utah. I remember catching one—its coloration, the texture of its skin and the strength of its legs as it wiggled to escape my grasp.

There have been many encounters with frogs since then but I can’t discount the impact of that first one … even some six decades later.

Several years down the road, I discovered frogs’ connection with tadpoles. I found them en masse in a small pond in Florida. There were hundreds, all bunched up in a ball, so thick I was able to scoop up 20, 30, 40 at a time in my cupped hands. To my young mind, they felt like wet Jell-O—slippery, wriggling, soft to the touch as they filtered through my fingers back into the pond. I was fascinated and a little awed that this little comma-shaped critter would become a frog. 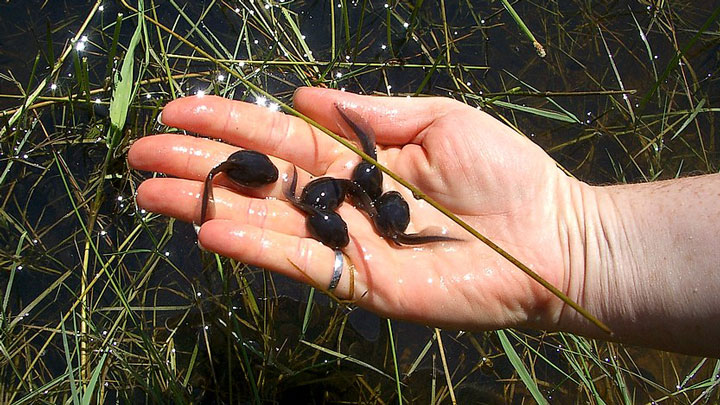 As I got older and more independent, I was, thankfully, free to roam about in undeveloped land where I watched turtles trudging along their slow-paced path, picking up my share to examine their colors, the design on their shells, the shape of their mouths and their interesting eyes. I noticed, too, that some withdrew into their shells immediately and didn’t come out, while others more readily returned to scratching legs and strained necks, eager to be on their way.

I watched birds twittering from branch to branch, explored their nests, observed as they caught and ate bugs and worms. I listened intently as bobwhite quail called out from nearby thickets. I chased a few and marveled at their whirring wings and sudden bursts skyward.

The list could go on for many pages, including all the snakes that came home with me, including the king snake that wrapped around my arm tight enough to cut off some circulation before I finally unwrapped it and turned it loose.

All these experiences were my interactions. They gave birth to my development, my soul, my ethic, my dedication to being a hunter-conservationist. They were critical in both opening the world of hunting to me and helping me to understand where I fit into that world.

Of course, there were and are other means of learning and understanding wildlife, hunting and wildlife conservation. And we must recognize that people have different learning styles, learning better by reading as opposed to hands-on experiences, for example. But the key is interacting in whatever style suits an individual best, given his or her situation.

The critical point here is to be aware that even small exposures to nature, seemingly mundane interactions with wildlife and the places they live, can have profound impacts on a developing mind. It’s important also to note that these experiences do not have to take place in a wilderness setting. They can happen as readily in a city park, a green belt or even in your own back yard.

In my case, evolution from frog chaser to hunter-conservationist started without any real mentorship or support. Think how much more could have been learned, ingrained, embraced if there had been a guide in those early years.

In acknowledging the hunter-sportsman’s role in conservation and the importance of recruiting the next generation, none of us should forget how important those small, tiny first steps are in making a difference.

About the Author
An outdoor communicator for more than 40 years, Chris Chaffin has worked with multiple outdoor companies, including serving two terms as treasurer of the Professional Outdoor Media Association before taking on the roles of vice president, president and chairman of the board. In 2007, he launched the communications consulting company Chaffin Communications, Inc. With support from the Outdoor Adventure Dream Giveaway, in 2012 he founded the Outdoor Adventure Conservation Fund, a Florida non-profit encouraging more people to get involved in traditional outdoor activities.