NRA Hunters' Leadership Forum: Fighting for the Future of Hunting and Wildlife Conservation 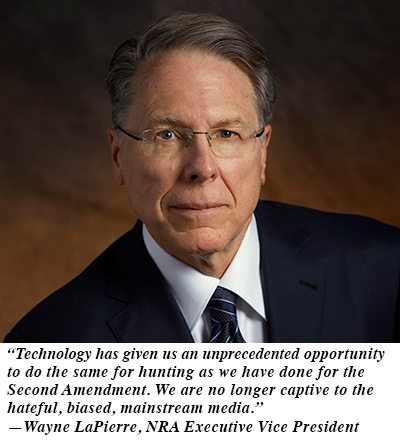 In response to the culture war on American hunters, in late 2014 the NRA launched the NRA Hunters’ Leadership Forum (HLF) to address the cultural, political, demographic and technological challenges facing the future of hunters, hunting and wildlife conservation in the 21st century. The HLF brings together dedicated hunters who have distinguished themselves as leaders in their professions, communities and in the field as we go on the offense and work together to save hunting's future.

The NRA HLF marches in step with one of the NRA’s five key purposes and objectives: “to promote hunter safety, and to promote and defend hunting as a shooting sport and as a viable and necessary method of fostering the propagation, growth, conservation and wise use of our renewable wildlife resources.”

About the NRA Hunters’ Leadership Forum (HLF)
As the nation’s oldest civil rights organization, the National Rifle Association fights nonstop for American freedom and its 5 1/2 million members, gun owners, hunters and shooters. In response to the culture war on American hunters, in 2014 it launched the NRA Hunters’ Leadership Forum (HLF) to address the cultural, political, demographic and technological challenges to hunting’s future in the 21st century. In working to enrich and grow the NRA’s efforts, the HLF marches in step with one of the NRA’s five key purposes and objectives: “to promote hunter safety, and to promote and defend hunting as a shooting sport and as a viable and necessary method of fostering the propagation, growth, conservation and wise use of our renewable wildlife resources.”

Under the leadership of NRA-ILA Executive Director Jason Ouimet, NRA-ILA’s full-time staff of 19 federal and state lobbyists and an international affairs division works 24/7 on behalf of all hunters—NRA members and non-members alike. By treating hunting as it has always treated the Second Amendment—like a political campaign—it leverages its enormous firepower and the grassroots efforts of millions of mainstream American hunters to fight for the collective hunting community

Fortunately for gun owners, hunters and shooters, Ouimet has worked for NRA-ILA since 2005, dedicating the past nearly 15 years to promoting and defending hunting and the shooting sports. He previously served as director of NRA-ILA’s Federal Affairs, where he oversaw and implemented NRA-ILA’s federal legislative and political agenda. Prior to that, he was named deputy director of NRA-ILA Federal Affairs, following years spent as an ILA Federal Affairs lobbyist covering the states of Georgia, Pennsylvania, Kentucky, New York and New Jersey. Ouimet got his start in the political arena in 1999 when he was hired by the Republican National Committee as a junior analyst where he spent the better part of two years conducting field research in Florida, Connecticut, Tennessee and Pennsylvania for President Bush’s 2000 presidential campaign. 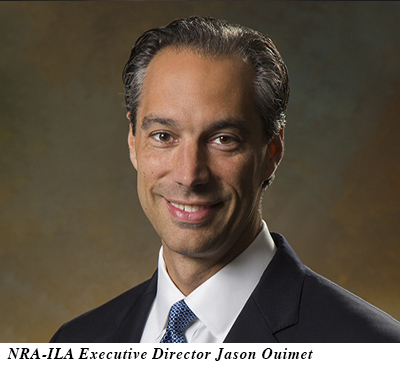 Visit NRAHLF.org for News on Hunting Issues.
The NRA HLF stands with the NRA and its lobbying arm, the NRA Institute for Legislative Action (NRA-ILA), as it works to reclaim the narrative on hunters, hunting and animal welfare and expose the misinformation touted by well-organized and well-funded animal rights extremists.

In July 2016, NRA Publications launched the NRA HLF website—NRAHLF.org—to monitor news on the issues impacting the future of hunting and wildlife conservation on the state, national and international levels. In addition, material shares the stories of hunters and hunting and explains: how poaching is not hunting; how legal, regulated hunting benefits wildlife; and how hunters are ethical, compassionate mainstream Americans whose dollars aid game and non-game species alike. Without hunting and hunters’ dollars, there would be no wildlife conservation. Visit NRAHLF.org regularly for all of the above and please share the story links. 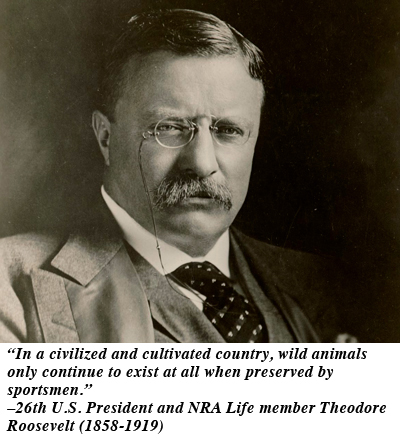 Strength in Numbers: Know What NRA Research on Public Attitudes Shows.
Funded by the NRA HLF, the NRA hired the research firm Responsive Management to conduct America’s first national survey and focus group study assessing public attitudes toward animal rights, animal welfare and hunting. With public attitudes controlling the debate, the NRA needed benchmark data to gauge public perceptions and begin crafting messages that resonate with the public. It found that promoting hunting is not a matter of changing Americans’ values but rather reaffirming them. The research reveals ground-breaking facts, including the following seven concepts:

Expose Extremists’ Efforts to Impact America’s Legal System.
Animal rights proponents increasingly target America’s legal system to advance their extremist agenda. Going beyond staging public protests and using celebrity spokespersons, they now work to ingrain their ideas in our courts and law schools to rewrite laws in their favor. Today groups like the Humane Society of the United States and People for the Ethical Treatment of Animals fund the salaries of animal rights attorneys. They also work to recruit law students to their cause, who will go on to influence society. For example, Bob Barker, former host of “The Price is Right,” has donated $1 million each to a number of the nation’s top law schools to fund animal rights programs. According to the New York Times, Barker’s goal is to “train a generation of lawyers, judges and legislators in animal rights.”

The NRA is addressing this movement with a logical, impassioned defense of the principles of the North American Model of Wildlife Conservation (NAMWC). It is conducting scholarly, legal research highlighting hunting’s benefits to counter claims presented by the other side. This has produced legal memoranda on: standing in animal and wildlife litigation; animals as parties to lawsuits; legal personhood status for animals; animals receiving rights based on cognitive abilities; and the NAMWC.

About the NRA: Fighting for Hunters for 148 Years
The NRA is the largest organization of hunters with an estimated 3.5-million hunters in its five-million-plus membership ranks. The NRA’s strength and political firepower comes from its membership as NRA members stand united on the issues impacting hunting’s future. In December 2014, on a motion put forth by now NRA 1st Vice President Richard Childress during the presidency of then-NRA President Jim Porter, the NRA Board adopted the North American Model of Wildlife Conservation as official NRA policy.