The Gun That May Have Killed the First Thanksgiving Turkey

In 1924, a home renovation in Duxbury, Mass., uncovered this Italian-made wheellock carbine. It had been safe for centuries in a secret compartment next to the front door—it was likely first stored there so it would be handy in case of Indian attack. The home was built around 1654 by members of the Alden family—a family whose roots date back to John Alden, one of the Pilgrim leaders of Plymouth Colony, who came over on the Mayflower in 1620.

Phil Schreier, senior curator for the National Firearms Museum at NRA headquarters in Fairfax, Va., says, “Aldens occupied the house from 1653 through 1896. This home survived nearly 350 years without being ravaged by fire, a common fate of early American residences.”

So the gun survived hidden away, waiting.

Schreier says his research indicates there is no doubt this gun was at the first Thanksgiving at Plymouth Colony in 1621. Alden undoubtedly also hunted with it and perhaps used it to kill a wild turkey for the feast America's school children still learn something about today that led to Thanksgiving. Whether or not this gun was used to hunt wild turkeys, we know it was kept to defend the young colony.

Alden, who signed onto the Mayflower as a 20-year-old cooper, joined Captain Miles Standish’s Militia to defend the settlers from possible attack. He was also a signatory of the original Mayflower compact. His rifle was a single-shot originally chambered in .50 caliber, says Schreier, but extensive use removed almost all traces of its rifling. Today, after years of use, repairs and modifications, the gun would require a .66-caliber ball.

This rifle is a rare, real glimpse back to that often mythologized time of our nation’s tentative beginning. A gun is too politically incorrect to appear in school textbooks these days, but that’s a shame because it clearly shows what the first European Americans used to defend themselves and to hunt with to put food on their table. 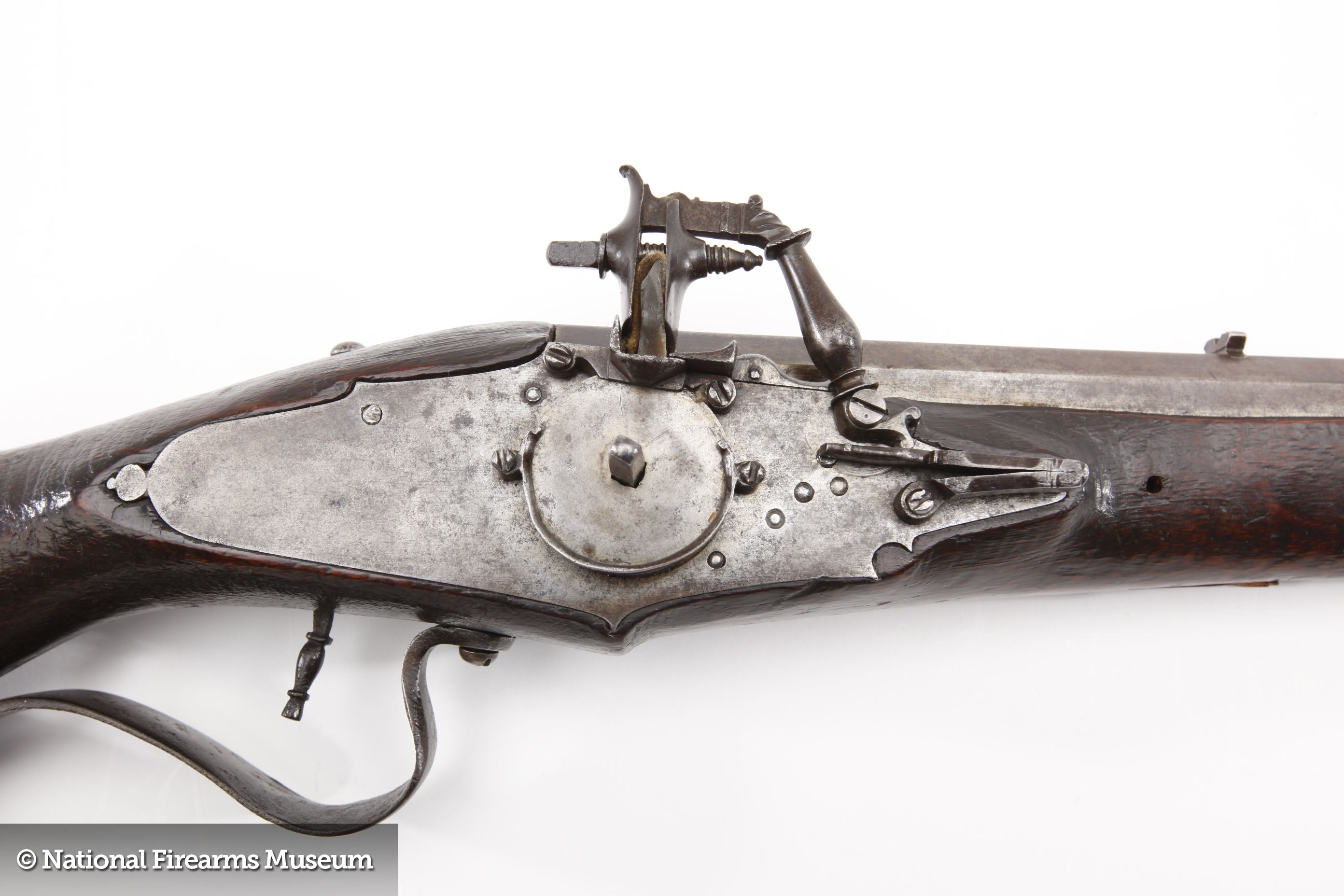 This Italian-made wheellock carbine found in 1924 is traced to John Alden, who brought it over on the Mayflower and had it in his possession during our nation's first Thanksgiving in 1621.

The pilgrims' Thanksgiving feast of 1621 at Plymouth Plantation is now often referred to as the original meal that later began the national holiday of thanks; however, for British New England, some historians point out that the Popham Colony in Maine conducted a Thanksgiving service in 1607. Other celebrations in the early colonial period even referred to the day after the fall harvest was complete “Thanksgiving.”

In 1621 the fabled feast at Plymouth Plantation came about in large part because of Squanto, a Patuxet Native American. Much like Pocahontas, Squanto taught the pilgrims how to catch eel and grow corn and served as an interpreter. (Squanto had learned English while enslaved in Europe.) Squanto negotiated with the Wampanoag chief, Massasoit, and got him to give food to the starving pilgrims during their first winter. Because of Squanto’s help, the feast now referred to as the first Thanksgiving was held in early October 1621 and was celebrated by 53 Pilgrims, along with the Native American chief Massasoit and 90 members of his tribe.

Bradford noted that “besides waterfowl there was great store of wild turkeys, of which [we] took many.” (Today, thanks to conservation efforts by American hunters, wild turkeys, which had plummeted to less than 30,000 nationwide in the 1920s, now number about seven million in the United States.)

Winslow described the Plymouth Plantation’s Thanksgiving feast this way: “Our harvest being gotten in, our governor sent four men on fowling, that so we might after a special manner rejoice together after we had gathered the fruits of our labor. They four in one day killed as much fowl as, with a little help beside, served the company almost a week. At which time, amongst other recreations, we exercised our arms, many of the Indians coming amongst us, and among the rest their greatest king Massasoit, with some 90 men, whom for three days we entertained and feasted, and they went out and killed five deer, which we brought to the plantation and bestowed on our governor, and upon the captain and others. And although it be not always so plentiful as it was at this time with us, yet by the goodness of God, we are so far from want that we often wish you partakers of our plenty.”

Afterward, festivals of Thanksgiving were observed sporadically in the colonies and tended to be autumn-harvest celebrations. But in 1789, Elias Boudinot, a member of the U.S. House of Representatives from Massachusetts, moved that a day of Thanksgiving be held to thank God for giving the American people the prudence to create a constitution that safeguarded freedom. A Congressional committee approved the motion and informed President George Washington. On Oct. 3, 1789, Washington proclaimed, "a day of public thanksgiving and prayer” on Thursday, the 26th of November. But Thanksgiving faded away for decades after President James Madison proclaimed a day of Thanksgiving to be held on Apr. 13, 1815.

Most of the credit for the permanent establishment of a Thanksgiving holiday goes to Sarah Josepha Hale. She was the editor of Ladies Magazine. She argued for the return of Thanksgiving in articles and by lobbying politicians. After years of crusading, she swayed President Abraham Lincoln. On Oct. 3, 1863, Lincoln proclaimed a national Thanksgiving Day be observed every year on the fourth Thursday of November.

See This Gun Firsthand!
The National Rifle Association’s National Firearms Museum in Fairfax, Va., has this gun on display. They affectionately call it the “Mayflower gun.” According to curators at the museum, markings on its barrel and lockplate indicate this gun is connected to the original Beretta family of armorers. The surviving detail of its wheellock device—the rotating mechanism, which provides spark and ignition—is a thing of fine craftsmanship and a link to our first Thanksgiving.

About the Author: Award-winning writer Frank Miniter is editor in chief of the NRA's America's First Freedom magazine and the author of multiple books, including "This Will Make a Man of You—One Man’s Search for Hemingway and Manhood in a Changing World." To watch the video of NRA's Phil Schreier talking about the "Mayflower gun," click here.