Meth Labs in My Hunting Area?

It started off as a night-patrol mission, flying over a California national forest in a small plane in pursuit of deer poachers. Headlights would give away a vehicle’s location as the scouts looked for spotlights shining into the fields as the poachers scanned for deer’s reflective eyes. While spotlighting deer in most states is legal providing no one in the vehicle has a gun, crossbow or archery equipment, it means a stiff fine and the loss of all equipment if occupants are armed.

The ground unit for such a patrol is typically three to four game wardens and their trucks. The plane covers large areas quickly so if a spotlighter is seen, the pilot radios the wardens. To avoid tipping off the spotlighters, wardens may use special dim lights to travel in “police dark” mode.

On this particular evening a spotlighter was sighted by the plane. California Fish and Wildlife game warden Jerry Karnow was closest and proceeded toward the vehicle in police dark mode. 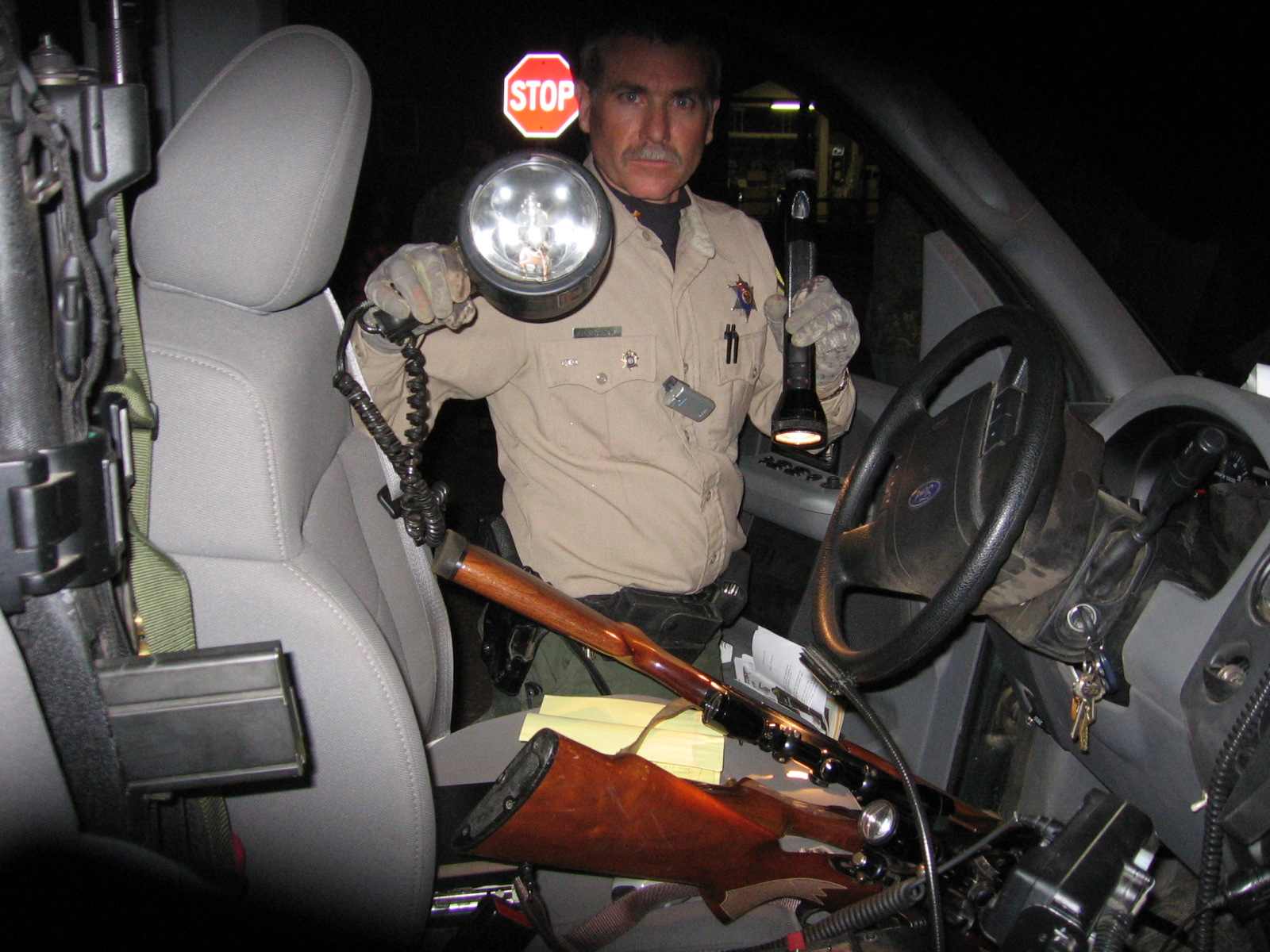 The plane reported that the spotlight was gone, but the vehicle’s headlights were shining on a couple people with flashlights. It appeared that they had shot a deer. Karnow moved forward on the dirt road.

The plane reported that the spotlighter’s vehicle was moving on a logging road. Ten minutes later, the vehicle stopped at a camp where there were other vehicles and a campfire.

Karnow turned onto the logging road, which was a two-rut trail. He saw a campfire and three trucks 100 yards ahead and took out his binoculars. The men were unloading a deer. Karnow radioed in what he had seen and proceeded. Though this was dangerous, game wardens regularly work alone in remote areas. He suddenly smelled a distinct odor like rotten eggs, natural gas or ammonia: a meth lab.

Karnow turned on his headlights flashing lights. The spotlighters jumped in their trucks to flee.  Suddenly the front of his truck pitched down and hit something. Despite wearing his seat belt, the sudden jolt sent him into the roof of the truck. He quickly maneuvered out of a foot-deep rut—dug to keep people away from the meth lab—and continued his pursuit. The plane stayed in contact with the wardens on patrol, and the spotlighters were captured.

As Karnow emerged from his truck, he realized his head was covered in blood from hitting the truck roof. It took a lot of bandages—and 42 stitches—to control the bleeding.

There are six main illegal drugs most commonly trafficked in the United States. In 2013, the percentages of drug trafficking offenses per drug were: methamphetamine: 24 percent; powdered cocaine: 24.1 percent; marijuana: 21.5 percent; crack cocaine: 13.1 percent; heroin: 9.8 percent; oxycodone: 4.6 percent; and other drugs: 3 percent. The proportion of Americans who use methamphetamine on a monthly basis has hovered in the range of 0.2 percent to 0.3 percent since 1999. In 2012, the National Survey on Drug Use and Health (NSDUH) found that approximately 1.2 million people (0.4 percent of the population) reported using methamphetamine in the past year. Karnow’s chase is growing more common across the United States as meth labs and meth users flee from urban areas and set up in the remote woods—the rural areas and off-road destinations particularly sought by hunters.

According to Kim Thorsen, deputy director for law enforcement and investigation at the U.S. Forest Service (USFS), the USFS located 107 meth labs and dump sites in national forests in 1999. Last year they found 488—a 356 percent increase.

The relatively minimal expense and simplicity of making methamphetamine fuels its popularity. Warden Karnow says that he and other wardens frequently find users camped out in the woods. Meth addicts can go days without sleep. But the drug's downsides strike quickly: irritability, paranoia, aggression and violence. Again, the prevalent backdrop for these scenarios is the hunting woods.

In the 1980s crack cocaine was the drug smuggled most regularly into the United States, driving up violence and crime. Today it is methamphetamine, and it is made almost anywhere. "Because of the rural locations of these labs, law enforcement officials are warning hunters and other outdoor recreationalists to be aware."In vast western states, labs are found deep in the forest where road access is not easy and spotting them from planes is difficult due to tree cover. Hunters have stumbled onto meth labs in abandoned cabins, shacks and caves and have come across them in tents, RV’s and camouflage-tarped kitchen areas. In the mix are make-shift latrines, camping supplies and a water hole with a filtration system hanging in the brush.

The chemicals and by-products of the process are highly toxic. One of the most identifiable signs of a meth lab is its ammonia odor. The manufacturing process uses Pyrex dishes, plastic and glass jugs and bottles, coffee filters, rubber tubing, aluminum foil, propane, thermometers, lie, salt, thermometers, funnels, cheesecloth, a blender and rubber gloves.  On a busy day, a meth lab creates $16,000 or more in product.

Getting rid of a meth lab is dangerous. Much of the waste is highly flammable. Meth cookers dump battery acid, solvents and other toxic materials into rivers or the ground. They discard toxic chemical containers and dump plastic bags of waste in the woods, abandoning hazardous substances such as sulfuric acid, lead acetate and lithium aluminum hydride—a chemical so dangerous even the moisture on a person’s hands can cause it to explode.

Because of the rural locations of these labs, law enforcement officials are warning hunters and other outdoor recreationalists to be aware. Use caution when approaching cabins deep in the woods or trailers parked along forest roads. Again, remember that ammonia-like odor.  Do not risk a confrontation. Worth noting is that when a cartel marijuana garden is found—a recurring problem with incidents in 67 national forests in 21 states—marijuana growers flee, often pulling up their plants to eradicate them. But meth dealers often fight back.

Meth labs are found in all 50 states, with the greatest number in the Midwest and Appalachia. The greatest number of meth labs have been found in Indiana, Tennessee, and Missouri. The USFS found 107 meth labs and dump sites in national forests in 1999. Last year they found 488. The number of busted meth labs increased tenfold over the past year in Washington state alone.

Though drug labs primarily threaten the safety of persons who discover them, they also pose a waste-disposal problem for the forest products industry. Landowners may be legally responsible for disposing of hazardous material found on their land, which is expensive and time consuming.

The USFS has posted a brochure advising people who find a meth lab or trash dump to leave quickly. Immediately report it to the police, game wardens (there are toll-free tip hotlines in all states) or the nearest USFS district office.