Two bull moose were recently discovered frozen in mid-battle with their antlers locked in 8 inches of ice in the remote village of Unalakleet, Alaska, located nearly 400 miles northwest of Anchorage, near the Bering Sea.

While burly moose are a common sight in northwestern Alaska, Brad Webster, a middle-school teacher in Unalakleet, was in shock when he came across the entangled antlers sticking up out of the ice while out for a walk with a friend on the grounds of Covenant Bible Camp, where Webster volunteers as a camp steward. “He and I were both certainly in shock,” Webster recounted. 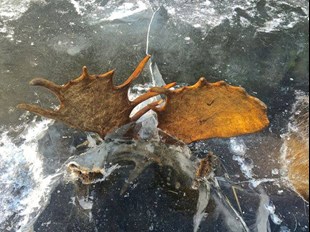 Considering the moose were found at the end of the species’ fall mating season, it’s likely they were battling over territory or a female. Webster speculates that one of the moose was wounded by the other’s antlers and they died together as their antlers got entangled during the fight.

On Nov. 12, six days after the initial discovery, Webster, along with a few others, returned to the site to remove the moose from the ice. Among the group was Jeff Erickson, student activities director of Bering Strait School District in Unalakleet and life-long hunter. “I am lucky to be a friend who was able to be a part of the recovery and take pictures,” said Erickson.

The spoiled meat will be used for dog food and trapping bait, while the remaining meat was left at the site—free to anyone who wanted it. The still-frozen moose heads were recovered and Webster plans to have them mounted to ultimately be displayed at Covenant Bible Camp. 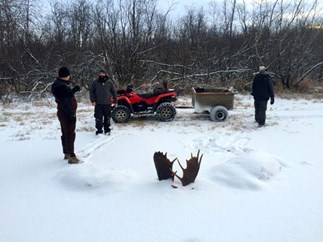 Webster seemed most excited about the fact that his discovery brought his small community together stating, “Living in a village that tends to be fairly reserved and seeing various people in the community, particularly elders, get so excited about seeing the moose has been a great feeling."

In the meantime, the discovery has become quite popular on the internet. “This thing has taken us by surprise with the global interest. It is, for sure, a very unique discovery, and we've been given a lesson in what ‘viral’ means. Hunting/fishing/gathering is a very big part of our lifestyle in Western Alaska and we've certainly seen the spectrum of positive and negative comments about what we do,” said Erickson.

Webster seemed to agree, stating that his discovery “certainly has made life interesting for awhile!”