Never one to shy away from stirring up trouble, pop star Miley Cyrus kicked off an anti-hunting social media tirade this week, at times equating hunting to playing God or interfering with what she considered "destiny." As originally reported by OutdoorHub, Cyrus slammed Kendall Jones and Rebecca Francis on Tuesday and Wednesday on the social media platform Instagram.

Francis was Cyrus’ first target. The singer screen-captured select posts from Francis’ page—in this case, one featuring Francis and presidential candidate Donald Trump, the other showing Francis with a mountain lion she harvested—and attached them to a photo of herself, said to be overcome with emotion. Cyrus included a somewhat fragmented caption with the post, claiming that, among other things, the photos left her "scared and sad" for the United States and animals at large. She included a message that seems to be in part directed at Francis, in part at Trump—who doesn’t hunt, mind you. "YOU are not destiny! It is not your job to decide when a living things life is over .... & YOU DT ARE NOT GOD NO MATTER HOW MUCH YOU THINK YOU ARE!!!" 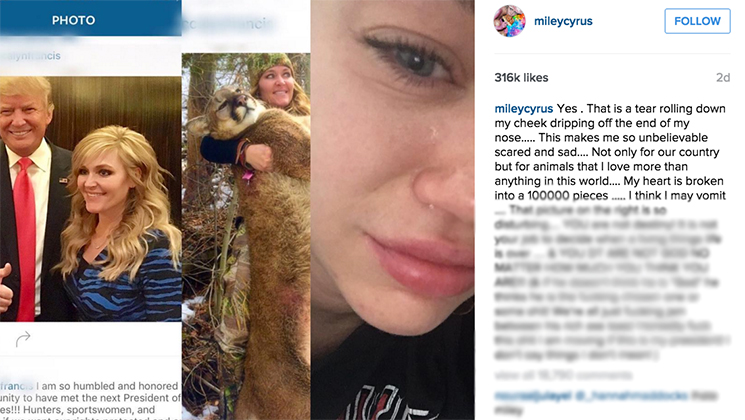 In a follow-up attack, Cyrus seized another of Francis' hunting photos. This time she connected Francis, and the associated content—which many hunters, myself included, would consider to be a very empowering photo—directly to Donald Trump, saying "I'm gonna puke ..... This what our future looks like with DT." 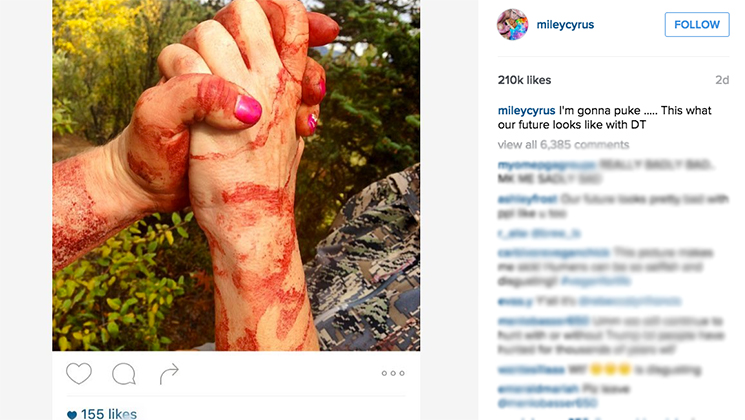 The assault continued as Cyrus turned her eye toward Kendall Jones, who was heavily persecuted by the liberal media and anti-hunters after trophy shots from an African safari surfaced in 2014. Cyrus focused on two photos—Jones posing with a service dog at a trade show (while wearing some sort of fur, which appears to have incited Cyrus’ ire), and with a trophy buck after a successful hunt. Cyrus irately questions how Jones could dare pose with the pictured Saint Bernard while "wearing his cousins." The complete caption is extraordinarily vulgar, so I’ll refrain from embedding a screenshot. Interested parties can find it on Instagram.

Hollywood types railing against hunting and those that pursue the hunting lifestyle is nothing new. What’s concerning, though, is the nearly 800,000 "Likes" that Cyrus’ comments received since being posted. The singer commands a large social media presence (she has 38.2 million followers on Instagram alone), and is capable of directing untold vitriol and hatred toward law-abiding hunters like Francis and Jones. Though both women are no strangers to cyber bullies—Francis was attacked by comedian Ricky Gervais and countless others in 2015, Jones by the world at large in 2014—their singling out is patently unfair. Jones' and Francis' respective Instagram accounts have become "Private" since the incident. One would have to assume that they fell under immediate attack from some of Cyrus' misled followers.

Why Cyrus and others have focused so closely on outdoorswomen is a topic for another day. What remains certain is that we, as hunters, must continue to rally around our own.