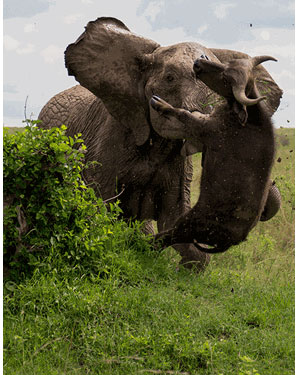 Have you ever seen a Cape buffalo being gored and tossed through the air by an elephant? Kimberly Maurer not only saw it in person, but she has the brutal photos to prove it. While on vacation at the Masai Mara game reserve in Kenya, Maurer captured the astonishing encounter up close.

As reported by Caters News Agency, the buffalo had been sleeping quietly under a tree, but as the elephant approached, it stood up and charged toward her. This was a highly unusual occurrence, as these two species typically live together peacefully. As the buffalo charged, the elephant gored it with her tusks and heaved the buffalo into the air. The buffalo did not survive. 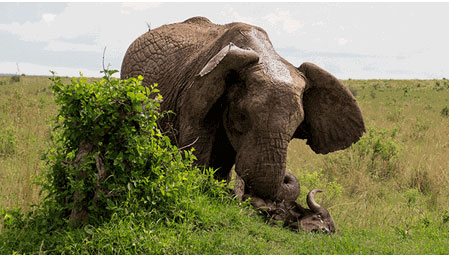 According to Caters News Agency, rangers at the Masai Mara reserve felt it was likely that the buffalo was unwell to act so aggressively toward the elephant, as this type of behavior is not standard. Maurer said of the scene, "I started looking through the images on the back of my camera immediately after the attack and became very excited that I had actually captured the event in detail. This photograph was, no doubt, a once-in-a-lifetime capture for me."
IN THIS ARTICLE
Africa Safari Elephant Cape Buffalo Masai Mara Kenya Rose Bier HLF Hunters Leadership Forum
More
SUBSCRIBE
RELATED
6 Reasons NRA’s Great American Outdoor Show is Must-See
News
Having Hunters’ Backs: The NRA HLF’s Year in Review
News
Washington Governor to Be Sued for Appointing Anti-Hunters to Wildlife Commission
News
Black Death … in More Ways Than One
News