500 Elephants Being Moved in Malawi

Can you imagine the effort and expense it takes to relocate one African elephant—let alone 500? But conservationists at Malawi’s Liwonde National Park, in conjunction with Malawi’s Department of National Parks and Wildlife, are doing just that as they kick off a massive $1.6 million project to move 500 of these giant mammals to a new home. Elephants in the park are currently struggling to survive due to increased human development and poaching. The solution? To relocate them 185 miles north to the Nkhotakota Wildlife Reserve where the elephant population has dropped from 1,500 to fewer than 100 elephants in the last 20 years.

As reported by the New York Post, Washington Post, Christian Science Monitor and CNN to media outlets worldwide, the relocation project, funded mainly by the Dutch PostCode Lottery and the Washington D.C.-based Wyss Foundation, is one of the most significant elephant translocations to date. 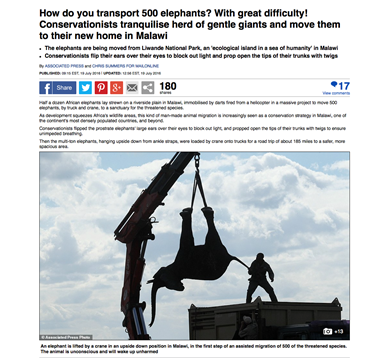 Moving 500 elephants is a Herculean effort that required months of planning and preperation. According to African Parks, every effort is being made to ensure there is minimal stress on the elephants, which are being tranquilized by a dart from a helicopter and lifted by crane and put into "wake-up" crates. Their overall health is then checked by a recovery team before being loaded onto low-bed trucks for their journey to Nkhotakota. Once they arrive, they are taken to a holding facility where they receive food and water. After 12 to 24 hours, they are released into the larger sanctuary.

"This is very much the way we'll have to manage things in the future," Craig Reid, manager of Malawai's Liwonde National Park, told The Washington Post.

For more information on the "500 Elephants" translocation project, click here.