The last 20-plus years have been challenging for America’s western desert sage grouse (Centrocercus urophasianus)—aka the “flying boxcar.” General populations throughout the West have dwindled as sagebrush habitat has been degraded or destroyed. An on-going battle over the need to list the species as endangered … or not … has pitted state wildlife agencies, federal wildlife and land managers, ranchers and hunters against each other and a variety of other interest groups, including anti-hunting organizations who seek any opportunity to diminish or eliminate hunting opportunity and our hunting heritage.

Intense study of sage grouse populations, the complex factors impacting their stability and cooperative efforts to do what’s best for these game birds has led to creation of both short and long-term management plans, embraced by state and federal agencies. There is recent good news of increasing populations in some areas, and for now, the species won’t be added to the endangered species list. For more information, click here. 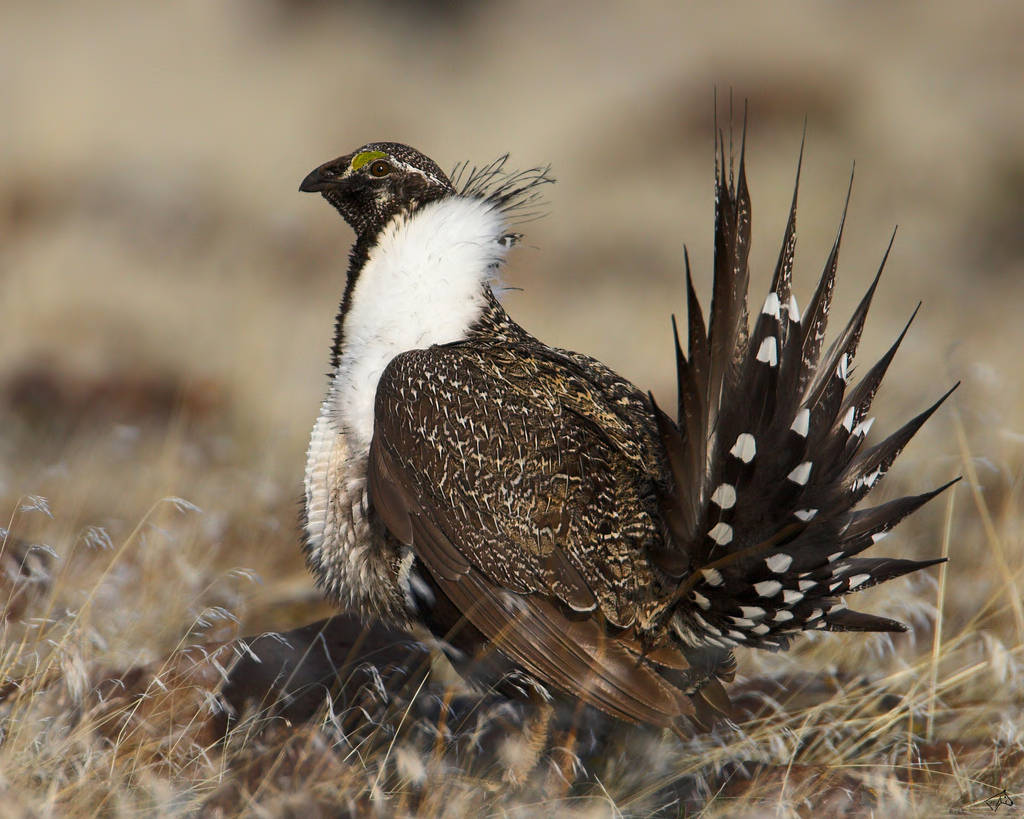 What isn’t in question is the species’ popularity and heritage among hunters and its stature as a unique and charismatic component of the high deserts of the American West. Nor is there any question about its dependency on a healthy sagebrush ecotype and the intimate connection with nature that hunters experience when chasing what many fondly call the “sage chicken."

While hunting opportunities for sage grouse are less now than in years past, the memories created while hunting them remain strong. Even simple and sporadic reminders, like the smell of sagebrush after a rain shower, remind us of how this magnificent bird and our days spent hunting them have helped create a passionate and supportive connection with nature.

My first legitimate hunting dog, a black lab named Alley—short for Alexander Starfoot Hudson—came to me as a “duck dog” but he was an open-minded boy and proved he didn’t mind also chasing and fetching doves, pheasants and, yes … sage grouse.

One of my most deeply memorable experiences with Alley was a quick, after-work sage grouse hunt in the Big Butte desert of southern Idaho. I had a new side-by-side 12-guage that needed some experience, so Alley and I left the truck, hiking to a likely-looking knoll surrounded by tall sagebrush.

We walked the perimeter of the knoll, slowly covering ground around the edge of the structure, with Alley staying close, swerving in and out between the tall sage, occasionally sneezing in the desert dust, but always checking in, as we worked the area. The afternoon sun was starting its decent, losing just a bit of its intensity.

Like many or maybe most experiences with these big birds, the first knowledge you have of one being present is when they explode into the air, often close enough that the heavy beating of their large wings creates a draft and makes your heart stop. You flinch momentarily before regaining control and settling in for a shot.

The big boomer that sprang out of the sage did all that and more. It was so close when it exploded underfoot that I had to wait for it to fly out a little distance before taking the shot, not wanting to damage the rich table fare it promised.

The new shotgun worked well and the recoil was followed by a satisfying puff of feathers and the grouse going down cleanly.

Alley was off at the shot, into the thick sage, on a straight-as-possible course toward the dead bird. As this was his first sage grouse hunt, I purposely let him search on his own, staying in a relatively open spot, intending to encourage him to bring the bird to hand. 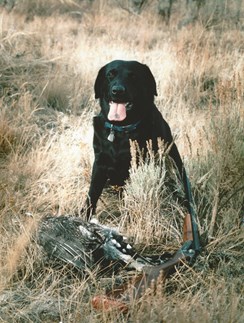 It was then the magic of the day unfolded. My buddy loved fetching birds and I was sure he had a mouth full. I calmly called for him to “bring it back.” Ten yards away, a tall sage bush directly in front of me shook as though someone had kicked it. Then, everything was still. I called again and a yard or two to the left a different bush shook.

The scenario played out for a minute, with different bushes shaking in different locations, before I felt it best to meet him halfway. Taking a few steps into the thick sage, moving so I could see Alley, I witnessed the heart and soul of a hunting dog. "It's memories and experiences like these that create within us the love of wildlife, wild places and our hunting companions."

Alley had the big sage grouse secured squarely by its chest, slowly stepping right, forward, then left. Each motion caused him to bump into another sage plant as I saw his entire face was covered by the thick, heavy, outstretched wings of the grouse, completely covering his eyes. Each time I called, he moved slightly to one side and tried again to get back to me, only to be blocked by another bush he couldn’t see.

I walked to him, he gave up the bird and I knelt down by his side, hugging and praising him. His loyalty, his passion to please, his big heart and the joy I saw in him as he delivered his hard-earned prize touched me deeply as I stood there in the early evening desert full of the smell of sagebrush. Like it was yesterday, I can still see Alley's sparkling eyes full of anticipation, his thick tail brooming the dusty desert floor, his nervous energy signaling his enthusiasm for us to continue the hunt.

We called it a day with that one bird. In my mind, anything else that might happen on that afternoon would be completely anticlimactic. It had been a few minutes—in the middle of the high desert, in waist- and chest-high sage, with my hunting buddy—that added a poignancy to my connection with nature, implanting a never-to-be-forgotten memory and yet another confirmation of how vital it is for us to assure our hunting heritage continues.

It's memories and experiences like these that create within us the love of wildlife, wild places and our hunting companions. The sagebrush connection is powerful and it is one of the things that keeps us coming back.