Why This Wildlife Biologist Hunts

“All life on Earth more or less depends upon the death of something else!” Makes no difference whether the organism is vegetarian, carnivore or omnivore or it draws nutrients from the “air.” Our world is essentially a closed system. Nothing comes in from outer space other than sunlight.

I am a hunter and proud to be! I hunt to live. I love wildlife and their habitat. I take the lives, in my instances of fish, game birds, other game and domestic animals both large and small, as well as vegetable matter to nourish my body and the bodies of my family and sometimes friends. The plants and seeds I eat are, or were, no less alive as the animals I take for food.

This fact of life, even though some seem to rebuke it, does not change things. This makes it easy for me to be a hunter. Food is not created in the “grocery store!”  We have food because something living died.

"Hunting, through the regulated taking of “targeted” game animals, ensures a healthy habitat, a dynamic balance of Nature, the perpetuation of the species."As a professional wildlife biologist, I spent many years researching and working with wildlife species with emphasis on game animals—those with economic value—which, in turn, causes land managers to maintain wildlife species numbers within what the habitat can support in the worst of weather conditions. Doing so maintains a healthy habitat and healthy animals.

A healthy habitat means a variety of plants within that ecosystem. As a result, there is vegetative matter not only for the game animals to feed upon and use as cover, but also a much greater variety of insects for song birds to feed upon, as well as small non-game species. This same vegetation produces seeds which provide food for a great variety of wildlife and we humans. As plants die, their remains are broken down and become nutrients within the soil for ensuing generations of plants.

Hunting, through the regulated taking of “targeted” game animals, ensures a healthy habitat, a dynamic balance of Nature, the perpetuation of the species. But, it is the other animals and plants that exist on that same land where hunting occurs that benefit many times more.

We often forget “man” is part of the ecosystem and Nature, no less than the wild and domesticated animals and plants. This too, is a fact of life. As humans it is up to us to properly manage animals and habitat to maintain and improve the quality of life. From a wildlife biologist’s perspective, in today’s world, as in the time of ancient man, hunting is the most ethical and efficient manner while benefiting wildlife, habitat and humans.

As long as hunters have a vested interest in wildlife they will continue to pay for conservation of all wild species. Had hunters not always paid the bills, many species—both game and non-game—would have long since disappeared! 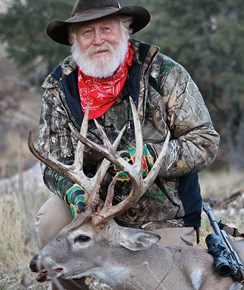 Legendary “Mr. Whitetail,” Larry Weishuhn, host and owner of DSC’s “Trailing the Hunter’s Moon,” is one of the most popular and widely-recognized wildlife biologists and outdoor media personalities nationwide.
Over the past five decades, he has authored multiple books and numerous articles on hunting and wildlife conservation. In 2004 his book, Trailing the Hunter’s Moon, was named ForeWord Magazine’s Gold Book of the Year in the Adventure and Recreation category.

A lifelong hunter, Weishuhn has long served as a featured speaker for the NRA and other organizations including the Dallas Safari Club (DSC) and the Texas Wildlife Association (TWA), where he was one of three co-founders promoting science-based wildlife management, firearms and hunting. For more information, click here.