Over the past three decades, I have had the opportunity to visit and present my research to most of the state fish and wildlife agencies and many of the federal wildlife and land management agencies throughout the United States. The agency buildings vary from large facilities in more urbanized areas to smaller buildings, sometimes located in the more rural areas of the state. One noteworthy commonality among most agency buildings, usually located in the lobby and always unobtrusively, is a memorial dedicated to the agency's fallen wildlife officers. The names of these officers are engraved on plaques, statues and even fountains, and I have never walked past one of these memorials without stopping to think about these officers who gave their lives to protect their state's wildlife resources and laws. Many wildlife professionals have devoted their lives to conservation. These fallen wildlife officers have given their lives to conservation.

While responsibilities of wildlife officers vary from state to state, they all enforce the laws and regulations pertaining to fish and wildlife resources, including the public’s use of them. Their jurisdiction also varies from state to state, but they usually have the authority to issue citations and make arrests. In some states, the enforcement of boating laws or off-road vehicle activity is also under the purview of the fish and wildlife agency.

Risks Facing Wildlife Officers
A limited number of officers must police hundreds of millions of acres of land, often with backup that can be hours away at any given time. Between all state and federal wildlife agencies, there are only about 8,000 wildlife officers tasked with enforcing hunting and fishing laws across the country. Additionally, during hunting season, the majority of individuals with whom these officers have contact are armed. Although almost all hunters are responsible, respectful citizens, a few are irresponsible or even criminals who can threaten the safety of wildlife officers and civilians.

In one tragedy, Pennsylvania Game Commission Wildlife Conservation Officer David Grove was fatally shot during patrol on Nov. 11, 2010. Officer Grove was arresting a man he had seen spotlighting and killing deer near Gettysburg. The poacher—a convicted felon who later stated that he didn’t want to return to prison—shot Officer Grove four times at close range. (The killer was captured the next morning, convicted of first degree murder on Oct. 2, 2012, and sentenced to death.)

Since the first known deaths in 1886, almost 300 wildlife officers from 65 different state and federal agencies have been killed in the line of duty. Most often the deaths were the result of gunfire—accidental or intentional—with large numbers of fatalities also attributed to vehicle accidents, drowning, aircraft accidents and heart attacks. It is unclear how many deaths through heart attacks or other medical emergencies might have been prevented if the wildlife officers were not in a remote location.

It is also worth noting that wildlife officers, beyond their own responsibilities in enforcing hunting and fishing laws, sometimes assist other law enforcement agencies. This can present its own dangers as exemplified by the death of U.S. Forest Service Officer Jason Crisp. On Mar. 12, 2014, Officer Crisp participated in the manhunt for a suspect who had murdered his parents in Burke County, North Carolina. Upon locating the suspect with several other officers, Officer Crisp and his K9 companion, Maros, were shot and killed during the exchange of gunfire. (The suspect was shot and killed by officers a short time later.)

Sacrifices like these have not gone unnoticed by the American public. Responsive Management’s research on public attitudes toward law enforcement illustrates that a majority of Americans understand the risks associated with wildlife law enforcement and appreciate the work being done on their behalf.

Awareness of and Attitudes toward Fish and Wildlife Law Enforcement Responsibilities
Our statewide surveys show that most residents and recreationists are aware that their state fish and wildlife agency is responsible for enforcing hunting and fishing laws. For example, in Arkansas, 88 percent of residents and 95 percent of recreationists (hunters, anglers and boaters) knew that their state agency, the Arkansas Game and Fish Commission, was responsible for enforcing hunting and fishing laws in the state. Also, in Virginia, 87 percent of hunters, 75 percent of anglers and 77 percent of boaters were absolutely or pretty sure that the state’s wildlife officers have full police authority.

An overwhelming majority of Americans consider the enforcement of fish and wildlife laws to be important. For instance, 85 percent of residents in the northeastern states think this program area of their state’s fish and wildlife agency is very important. Also, in Colorado, 97 percent of residents think that enforcing laws to protect threatened or endangered wildlife is an important duty of Colorado wildlife officers. Residents of the southeastern states agree, giving the importance of these enforcement efforts a mean rating of 8.8 (on a scale of 0 to 10, with 10 being the most important). 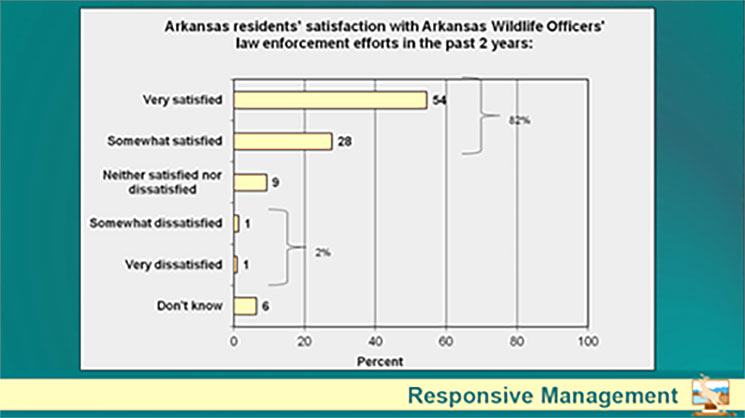 One reason that the enforcement of fish and game laws is considered so important is because some Americans feel that some hunters violate game laws or practice unsafe behavior while hunting. Furthermore, these violations are seen as intentional. The two violations most commonly believed to occur are drinking alcohol while hunting and shooting game out of season. Likewise, a substantial number of Americans feel that many anglers violate fishing laws and do so intentionally: 40 percent of Americans, including 42 percent of anglers, feel this way. The two violations most commonly believed to occur include fishing over the creel limit and keeping undersized fish.

Contact with Wildlife Officers and Related Opinions
According to the aforementioned studies in Arkansas and Virginia, between one-third and one-half of recreationists (hunters, anglers and boaters) reported having contact with wildlife officers while engaging in outdoor recreation in the two years prior to their respective surveys (42-48 percent reported this in Virginia; 35-42 percent did so in Arkansas). In both studies, roughly two-thirds of recreationists indicated that the contact was initiated by the wildlife officer. A strong majority of Arkansas recreationists (hunters, anglers and boaters, 80-87 percent) described the contact as a positive experience. Indeed, nearly all those who requested information or assistance said they were satisfied with the assistance they received. Results of the Virginia study are consistent with these findings: 95 percent of hunters, 98 percent of anglers and 97 percent of boaters agreed that the wildlife officers treated them fairly.

It is interesting to look at the terms used to describe recreationists’ (hunters, anglers and boaters) encounters with wildlife officers. Strong majorities (all over 80 percent, many over 90 percent) agreed that the wildlife officers were professional, courteous, friendly and knowledgeable. This extends beyond the Arkansas and Virginia studies. In Colorado, Delaware, Georgia, Idaho and Montana, 92-100 percent of residents who came into contact with wildlife officials within the previous two to five years agreed that they were professional, 88-98 percent agreed they were courteous and/or friendly, and 90-98 percent agreed they were knowledgeable. Most also agreed that being approached by a wildlife officer while they are hunting, fishing or boating is reassuring to them. Conversely, most respondents disagreed that being approached by a wildlife officer makes them feel nervous or angry. 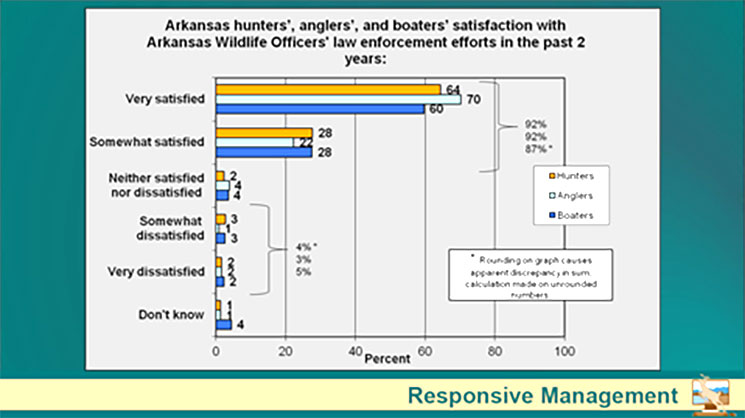 Consequently, strong majorities of respondents in Arkansas and Virginia support wildlife officers having full police authority: full jurisdiction to issue citations or make arrests for any crime in addition to hunting, fishing or boating infractions. Americans in general are more likely to say that penalties for violating fish and wildlife laws are too lenient rather than too strict.

Summary
Our research over the past 30 years, conducted in several different states and at several different times, has consistently shown that most Americans and sportsmen and women greatly value fish and wildlife law enforcement—especially  the men and women who do the job every day. Americans consider the job to be dangerous and difficult and in stunning numbers overwhelmingly feel wildlife officers are professional, courteous and helpful during interactions with the public. They also support having wildlife officers present in the field with full police authority. It is fortunate and important that wildlife officers are largely well respected in their own right given that they are often the most publicly visible aspect of fish and wildlife agencies nationwide.

When encountering wildlife officers, especially when they are checking our hunting or fishing license, we should always remember to acknowledge the tremendous sacrifice and risk they take each day to protect America’s precious wildlife resources.