Promoting the Mentoring Stage of Hunting

Dave Steffen, who heads the Virginia Game Department’s Forest Wildlife Science Team, recently told me that some of the most fascinating hunting-related literature he ever read was a late 1970s study by Dr. Robert Jackson and Dr. Robert Norton of the University of Wisconsin-LaCrosse. One of their key discoveries was that many individuals go through five major stages during their years spent afield.

Jackson and Norton stated that many hunters—typically young hunters—begin at the “Shooter Stage,” in which they simply enjoy shooting, then then they enter the “Limiting-Out Stage,” striving to kill their limit of whatever game animal they are pursuing. The “Trophy Stage” is third—trophy bucks, bull elk or long-bearded gobblers become the obsession, followed by the “Method Stage” where individuals experience great delight in employing more primitive weapons such as bows, crossbows or muzzleloaders. Finally, some people—often later in life—reach the “Sportsman Stage” where just being outdoors is enough. These folks typically enjoy mentoring youth and adults new to hunting.

To promote the virtues of hunting and shooting, there’s no question that we need more Stage Five hunters. Larry Shanks, who manages the gun departments at Mahoney's Outfitters in Johnson City, Tenn., agrees.

“If we older hunters don’t pass on our hunting and shooting traditions, the younger generations will never know about the value of being outdoors,” said Shanks. “It’s very important that we reach out, especially to urban and suburban adults and children who have no idea what being out in nature is like.”

Shanks acknowledges the difficulty of that task, as hunting and the shooting sports often seemingly have little appeal to kids—and even adults—who are more accustomed to manipulating their thumbs while playing video games than exercising their limbs while outside in the fresh air. The good news is that the satisfaction gained from pursuing a wild game animal successfully and bringing it home to eat is an experience deeply rewarding and often readily apparent to even a novice youth or adult hunter. 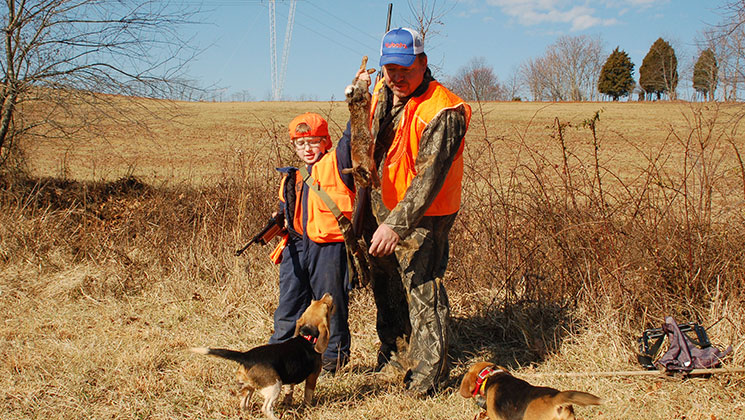 “It’s a no brainer that having an older hunter as a mentor is key to recruiting and retaining new hunters,” said Steffen. “State game departments can create Youth Days, Apprentice Licenses and Women in the Outdoors events, which are very good things to promote. But unless there is someone to take these youngsters and adults hunting, chances are they won’t continue. Those Stage Five mentors are the missing link.”

Steffen relates that one of the best books on the subject is “The Sportsman’s Voice: Hunting and Fishing in America“ by Mark Damian Duda, Martin F. Jones and Andrea Criscione of Responsive Management in Harrisonburg, Va., a public opinion and survey firm that specializes in outdoor topics.

"Mentors are everything to the recruitment, retention and reactivation of the next generation of hunters and shooters,” says Duda, winner of the 2016 NRA Distinguished Hunters Leadership Award. “With a mentor, an individual is likely to continue in the sport. Without one, an individual is unlikely to progress and become an active hunter or shooter.”

Duda adds, "One thing to remember is a mentor-mentee relationship does not have to be an adult-child/student relationship. A younger individual can mentor an older individual and a person can mentor someone his/her own age.” Having studied and conducted three decades of research on how sportsmen and women can increase participation in hunting and shooting, he explains the findings are crystal clear.

“Ask someone else to go with you,” he says. “In general, prospective hunters and shooters don't watch a television show or receive a mailed brochure and out of nowhere start to hunt or shoot. Hunters and shooters are initiated through friends and family. Asking and taking someone who has never hunted or shot before is by far the most important thing a seasoned hunter or shooter can do to help maintain America's hunting and shooting heritage."

Responsive Management’s “The Future of Hunting and the Shooting Sports” includes a section detailing how traditionally rural fathers passed down their passion for hunting to their sons. Sadly, in our increasingly urbanized country, fewer moms and dads—many of whom are single parents—are able to do so today, as they are being born in cities or suburbs and have never hunted or engaged in the shooting sports. This is all the more reason for veteran sportsmen and women to step up and become mentors.