In order to tell this story properly there are two things to consider about legendary early-20th-century outdoor writer and avid outdoorsman Gordon MacQuarrie. First, MacQuarrie was a shameless nostalgist. From his earliest stories of The Old Duck Hunters’ Association (ODHA), a semi-fictional group of hunters and fishermen based on MacQuarrie and his friends, to his final newspaper column, it is evident that honored traditions, wise old-timers and vintage gear played a central role in his writing.

In the story of his first duck hunt—“Ducks? You Bat You!”—MacQuarrie sets the stage with live decoys, antique double guns, battered wooden blocks and two older hunters, one of whom was the famous “Mr. President” of the ODHA. During that hunt in 1927 those veteran duck men indoctrinated the novice MacQuarrie in a way that turned him into a lifelong waterfowler and a sentimental poet of the field and marsh.

In his final story, “The Way It Was—The Way It Is,” published in the Milwaukee Journal just hours after his unexpected death in November 1956, MacQuarrie contrasts the modern way of hunting versus the old ways. MacQuarrie fans already know that the old ways won the day—they always do for ODHA, Inc.

MacQuarrie’s fans also know that he had an uncanny ability to make us want to join him in that icy November duck blind, watching canvasbacks and bluebills slash into the decoys. We want to sit on that stump and freeze with Mr. President as he awaits his buck. We want to bust through the thickets with him, chasing “pa’tridge” and “chickens.” That was his trick. MacQuarrie was an easy guy to relate to and knew how to grab his readers by the sleeve and pull them along on every adventure.

Shortly after his sudden death from a heart attack at age 56, one of his coworkers at the Journal wrote, “I doubt there was a person in the world who didn’t like Gordy.”

The second thing you should know is that affection for MacQuarrie hasn’t waned much since his passing. His ODHA books remain in print and he is still an icon among waterfowlers, upland hunters and trout fisherman alike. Of course, he is especially cherished in his home state of Wisconsin.

Recently the Barnes Area Historical Association in Wisconsin opened an exhibit dedicated to MacQuarrie. Just a stone’s throw from MacQuarrie’s famous headquarters shack of the ODHA, it is a fitting site for the collection. So many of the places MacQuarrie often and affectionately wrote about—Hole-in-the-Wall, Blunt Point, Shallow Bay, Johnny’s Pothole, the “big red cabin on the hill,” Stones Bridge, and many more, are right there in far northwest Wisconsin.

I was fortunate to be involved in the creation of the collection. In the late 1990s I had the privilege to interview MacQuarrie’s only surviving family members while researching a biography about him. I spoke with his widow Ellen several times at her home in York, England, and I visited MacQuarrie’s son-in-law Tom Wieder in Monterey, Calif. Tom married MacQuarrie’s only child, Sally, and the two moved to California shortly after MacQuarrie’s death.

Following one visit to California, Wieder sent me home with numerous MacQuarrie heirlooms. His final words to me were that he and Sally had always hoped that these things would be displayed to ODHA fans. It took almost 20 years to find a venue, but that wish is now a reality.

Naturally the collection contains items MacQuarrie used in the fields, on the duck marshes and in favorite trout streams like the Brule River. But it also holds other, more personal treasures.

There is a pipe with MacQuarrie’s tooth marks in the stem. And a medal awarded to his father by Queen Victoria following the 1885 Northwest Rebellion in Canada. Perhaps most evocative of all, there is the old Underwood No. 5 typewriter that MacQuarrie used to pound out some of the earliest ODHA stories while he still lived in his hometown of Superior, Wis. A copy of a little known manuscript with MacQuarrie’s notations rests in the Underwood’s carriage. 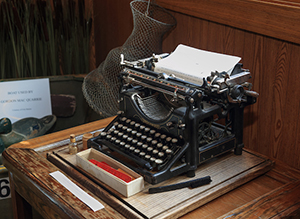 One of Gordon MacQuarrie's personal typewriters, this Underwood No. 5 (complete with original accessories) was used during his time in Superior, Wisconsin.

On display are numerous wooden decoys, including a couple of the oversized Balsa birds he mentions in “The Old Brown Mackinaw.” One of those decoys—a bluebill, of course—even has lead shot in it, likely put there by MacQuarrie himself, or maybe Mr. President, while finishing a cripple.

There is also an old wooden duck boat. That boat has spent the last 60-plus years stored in a barn not three miles from the museum. The boat’s caretaker knew all along that people would want to see this tiny craft that carried MacQuarrie and Mr. President on so many diver hunts during frigid November blasts.

Of course there are photos, fishing tackle, and even one of MacQuarrie’s bamboo fly rods. The collection is likely to grow, too, as people learn of the exhibit. Lots of folks up that way have held onto ODHA memorabilia. There are even rumors that the original “Old Brown Mackinaw” still exists.

Even though MacQuarrie was a modest Old Duck Hunter, seeing people enjoy the gear he called “the sinews of war” would surely bring that big, broad smile of his. And I believe he would be especially pleased that his old tools of the trade ended up back in a place many still call “MacQuarrie Country.”

The museum is located at 4545 County Highway N in Barnes, Wis. Normal museum hours are limited, but the collection is viewable year round by prior appointment. There is no admission charge, but donations are accepted. Further information is available at http://bahamuseum.org/.

About the Author
Outdoor writer and photographer Keith Crowley is the author of “Gordon MacQuarrie: The Story of an Old Duck Hunter.”

The biography of this literary legend explores the relationships MacQuarrie nurtured and treasured, records his coming of age during U.S. President Theodore Roosevelt’s wildlife conservation movement and highlights his claim to fame as America’s first full-time professional outdoor writer. To order Crowley’s book, click here or send an e-mail to [email protected].