Be a “Johnny Appleseed Deerbrowse”

“Do you recall the story of Johnny Appleseed, the man who wandered throughout the Northeast planting apple seeds wherever he traveled?” I questioned members of Dallas Safari Club at a monthly meeting. Several nodded an affirmative. “Man and wildlife benefited from the beauty of the apple blooms in the spring. Later, those trees bore fruit and provided food for man and wildlife as well as nesting cover.” I continued, “We can easily adapt what he did, with minor adjustments, to improve the wildlife habitat in the areas we live and hunt.”

Johnny Appleseed’s planting method was simple: a sharpened walking stick and a bag of seeds. As he walked, he poked a hole in the ground, dropping in his seeds and then covering them.

I have often done as Johnny Appleseed. The difference is, I plant deer browse and wildlife-friendly seeds on properties I manage as a wildlife biologist and where I hunt. If you are a whitetail hunter, winter and early spring are the ideal times to scout for next year’s hunting season. Shed antlers tell us where specific bucks lived, their antler size and, to some extent, their age. Sheds along with rubs and scrapes provide clues about where to start hunting come fall. Late winter and early spring are also the ideal time to become a “Johnny Deerbrowse.”

Starting late summer and fall, gather seeds from plants that grow in your area. These include seeds from seed-bearing “weeds,” acorns from various oaks, pecans, plums, persimmons, various berry-bearing vines, grapes and others. Store the seeds in a cool place until you start your scouting during late winter. To the collected seeds add corn, maize, peas and beans and commercially available seeds from Tecomate, which has offered a food-plot-based nutritional management strategy for deer since 1983. If you did not gather seeds, simply use seeds you can purchase at the local nursery or feed store to mix with Tecomate’s seeds.

Before heading to the field, mix and blend the various seeds together, put them in an easy-to-carry sack and grab a walking staff. As you walk, poke holes in the ground, drop in two or three seeds then cover them. Take a few steps and plant more seeds while scouting. Carry several sacks of seeds to the field. I usually take about 20 or so pounds of blended seeds.

Planting wildlife seeds as a “Johnny Deerbrowse” increases plant variety, which can provide additional forage for deer, but also food and habitat for many other game and non-game species, both big and small!

This technique works well on large acreages as well as small. The only expense other than your time is what commercial seeds you to add to your mixture.

It’s the little things that make a big difference! By being a modern-day Johnny Appleseed, American hunters can help to supply a consistent source of nutritional forage and help to relieve pressure on native habitat to the benefit of all wildlife species.

About the Author
Legendary “Mr. Whitetail,” Larry Weishuhn, host and owner of DSC's "Trailing the Hunter's Moon," is one of the most popular and widely-recognized wildlife biologists and outdoor media personalities nationwide. 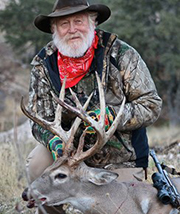 Over the past five decades, he has authored multiple books and numerous articles on hunting and wildlife conservation. In his 2004 book, Trailing the Hunter's Moon, was named Foreword Magazine's Gold Book of the Year in the Adventure and Recreation category.

A lifelong hunter, Weishuhn has long served as a featured speaker for the NRA and other organizations including Dallas Safari Club (DSC) and the Texas Wildlife Association (TWA), where he was one of three co-founders promoting science-based wildlife management, firearms and hunting. For more information, click here.