Number of Hunters Who Hunt Mostly for the Meat Still Grows

Survey research shows that American hunters most often name the meat as their most important reason for hunting, and that the percentage of hunters who hunt mainly for the meat continues to grow. Responsive Management, which has tracked hunting participation for almost three decades, recently released the latest results of a survey question put to U.S. hunters since 2008. Asked to choose their single, most important reason for hunting from a list that included to obtain a trophy, to be close to nature, to be with family and friends, for the sport or recreation, or for the meat, about two in five hunters nationwide selected the latter—by far the most popular answer. (While research shows that hunters hunt for numerous reasons, this question was designed to identify their top reason.)

Rather than any new development, this finding is instead the latest data point in a continuing trend. Whereas the sport or recreation was the most popular reason for hunting roughly a decade ago (when about one in three hunters gave this answer), hunters beginning in 2013 have most often named the meat as their primary motivation for going afield. And while the percentages of hunters naming one of the other three reasons have declined or remained flat over the past decade, the proportion of hunters who say they hunt mostly for the meat has almost doubled.

The reasons for this emphasis on game meat as a primary motivator for hunting participation range from the economic to the sociocultural. The shift cannot be attributed to a single reason alone. An important benefit of hunting is its potential as a source of food that hunters can acquire themselves in a cost-effective manner. During times of economic downturn, such as the recession that gripped the country for much of the last decade, hunting is an attractive option for putting food on the table. Certainly, this perspective is represented to some degree within the substantial percentages of individuals who, over the last several years, hunted primarily for the meat.

Another reason for the uptick in hunters who went out mostly for the meat is the locavore movement, a growing national trend reflecting interest in eating locally and taking a more active role in the acquisition of food—especially organic, free-range, chemical- and hormone-free meat. Through the locavore movement, individuals from nontraditional hunting backgrounds have flocked to lessons and seminars offering instruction on how to hunt and process game meat. Locavore hunters are often educated millennials who hail from urban and suburban areas. Lacking traditional hunting mentors, they nonetheless have been moved to take up hunting as adults for reasons of self-sufficiency, health, sustainability and/or a desire to reconnect with nature.

The growing popularity of the locavore movement is perhaps best exemplified by the fact that Mark Zuckerberg, founder of Facebook and an icon of the millennial generation, has taken up hunting as a means of procuring his own meat (Zuckerberg was recently quoted as saying that food "tastes doubly better when you've hunted the animal yourself.")1

The locavore movement has grown to the point that fish and wildlife agencies are beginning to take seriously the recruitment and retention potential of this new category of hunter. Responsive Management recently worked with the Southeastern Association of Fish & Wildlife Agencies' (SEAFWA) Committee on Hunting, Fishing, and Wildlife-Related Participation and the Midwestern Association of Fish & Wildlife Agencies' (MAFWA) Recruitment and Retention Committee to evaluate the outcomes of a series of pilot programs designed to promote hunting and fishing among young adults in urban/suburban settings. The programs targeted individuals who were interested in locally grown or organic foods.

The locavore movement was also examined in “Hunting, Fishing, Sport Shooting, and Archery Recruitment, Retention, and Reactivation: A Practitioner's Guide,” a new handbook produced by Responsive Management and the National Shooting Sports Foundation. The handbook, which covers recruitment, retention and reactivation (R3) strategies and issues consistent with the ones identified in the National Hunting and Shooting Sports Action Plan, also features a series of on-the-ground vignettes written by R3 professionals and academics. Several of these vignettes focus on the potential for people to be recruited into hunting through locavore motivations.

Finally, the growth of the locavore movement has become important enough to warrant exploration in a recent documentary. “An Acquired Taste,” a new film from producer/director Vanessa LeMaire, follows three teenage locavores as they decide to learn how to hunt as a way of connecting with the source of their sustenance. 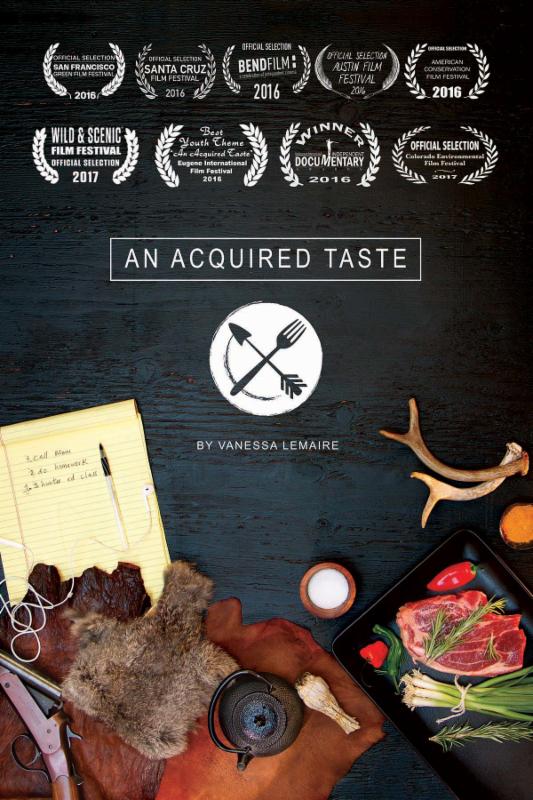 "Without the data, I never would have suspected there was a trend this big," says LeMaire. "Responsive Management's “The Sportsman's Voice” and “The Future of Hunting and the Shooting Sports” had been key in my research, but it wasn't until they crunched some numbers that I realized there was an opportunity to reach out to this new demographic. The statistics were essential to the film."

LeMaire also notes the positive reception the film has enjoyed among non-hunting foodie crowds. "So far, the film is proving to be a great eye opener to non-hunters who seek alternatives to factory farmed meat. The experiential style of the film invites non-hunting audiences to live their first kill through the journey of the three teens. Because the adolescents are so authentic, one can't help identifying with them."

She continues, "We've had youth and adults stand up after a screening sharing their transformation, and people choking up saying that they had never understood their father or brother's hunting habits until now, and that, at last, they felt reconciled."

From rural residents who have stalked game their entire lives to urban millennials who have only recently become locavores, an increasing number of hunters today are heading into the field first and foremost for the meat. This latest research on hunter motivations reconfirms the value of hunting as a source of sustainably harvested organic meat, in addition to its economic, recreational, social and naturalistic benefits.

Services Collage Responsive Management has conducted human dimensions research in all 50 states and 15 countries, completing more than 1,000 studies. We have conducted research for every state fish and wildlife agency, most federal resource agencies, and most DNRs and NGOs, including the National Shooting Sports Foundation (NSSF), the National Rifle Association (NRA), the Archery Trade Association (ATA), the Rocky Mountain Elk Foundation (RMEF), Ducks Unlimited (DU), Safari Club International (SCI) and dozens of others.