PETA Now Says Milk is a Symbol of White Supremacism

PETA is at it again—and how fitting for the week of April Fools’ Day. The group’s latest proclamation—“Milk is a symbol of white supremacy”—might seem too ludicrous even for this bunch of radicals if we weren’t so used to its absurdity that some of us barely blink an eye. Despite the inconsistency with common sense, a new PETA video released this week equates drinking milk with Nazism and asks, “Did you know that milk has long been a symbol used by white supremacists?”

“WHAT?” many a milk drinker asks.

Why do we ask it? Because milk is good for your health—whether you are a child or an adult; white, black, Hispanic or any other ethnicity. Regardless of whether one drinks milk, the facts remain: It is an important part of the human diet and a great source of vitamins and nutrients. It contains protein, which helps to build muscle, and, considering it is loaded with calcium, is said to make for quite healthy bones and teeth. There is good reason for all those “Got Milk?” commercials! 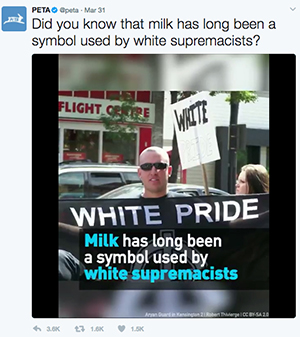 As noted by the news and commentary website Heat Street—which posted the PETA video and recognizes the culture war we mainstream Americans are fighting with anti-hunters and other extremists—the video is followed by some secretly-captured (and horrifying) footage of cows being manhandled by factory farm workers, so viewer discretion is advised. The website adds, “From likening rape survivors to pigs and cows, to calling Pokémon a form of animal cruelty, PETA’s efforts to ‘save the animals’ always make headlines—and with good reason: They’re completely absurd.”