Overnight on Sunday, July 16, someone broke into the mink pens at Lang Farms in Eden Valley, Minn., and released up to 40,000 mink from their cages and into the wild. Though no one has claimed responsibility for the crime to date, authorities are pointing the finger at anti-hunting, animal welfare extremists as the facility raises mink for the commercial fur industry.

The Stearns County Sheriff’s Office received a call from Lang Farms reporting the crime just after 5:30 a.m. Monday when it was discovered that someone illegally entered the property, disassembled part of the perimeter fencing and released all of the mink. In an interview with the Minneapolis Star-Tribune, Stearns County Sheriff Don Gudmundson said he is confident the crime was committed by animal-welfare extremists. “Who else is going to do this?” he explained, adding, “These nitwits think they are doing something good.” 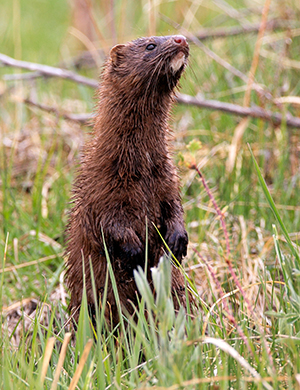 While these misguided, criminal extremists think they are helping the animals by tearing down fences, opening cages and releasing them from Lang Farms, pen-raised mink are not equipped to survive in the wild. Many of them will become food for larger, native predators and others will be run over on the area roads, but most ultimately will succumb to starvation because they never learned to hunt. So by tearing down Lang Farms’ fences and opening cages the misguided criminals have unwittingly doomed most of the mink to a slow and painful death from starvation.

In addition, pen-raised mink that manage to survive for a time will wreak havoc on local wildlife populations as they disperse from the crime site into this central Minnesota town. Sheriff Gudmundson has contacted state and federal authorities since the release occurred adjacent to a state wildlife management area.

Lang Farms is asking that anyone who sees these animals to contact them at 320-453-4750 so the facility can attempt a recapture. They also are warning local residents that mink are aggressive animals that likely will bite if handled so the public should avoid trying to capture them on their own.

With no current suspects or claims of responsibility as of yet, it’s impossible to know which group committed the crime. In the meantime, authorities are asking for anyone with information about the crime to please contact the Stearns County Sheriff’s Office at 320-251-4240.