Why Hunting is the Backbone of African Wildlife Conservation

Contrary to the rhetoric of anti-hunting extremists, hunting is an essential partner of photo tourism and other outdoor recreational activities when it comes to wildlife conservation efforts in Africa. Why? Because hunting operations conserve large expanses of habitat, contribute to counter-poaching efforts and are directly responsible for restoring healthy wildlife populations—including those of many endangered species. As African economies grow, wildlife conservation becomes increasingly challenging and complicated. Hunting, with its inherent economic incentives for conservation and ability to compete economically with other land uses, represents one of the best hopes for ensuring wildlands remain intact and wildlife does not go extinct.

Habitat Conservation
Habitat conservation is the foundation of wildlife conservation. In Africa, more than 166 million acres of wildlife habitat are conserved within public and private hunting areas. This is equal to roughly twice the size of the U.S. National Park System. If anti-hunting extremists succeed in exterminating all hunting in Africa, the results are expected to devastate wildlife. 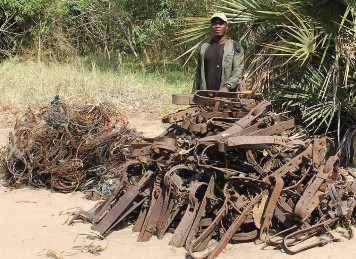 A 2016 peer reviewed study published by researchers with the World Wildlife Fund determined that if not for hunting, 84 percent of wildlife conservancies in Namibia would not be economically viable—including those that also support photo tourism. If these conservancies were forced to close, it would leave some 12,355,269 acres of wildlands—an area five times the size of Yosemite National Park—increasingly vulnerable to land uses that can undermine ecosystem integrity and decimate entire wildlife populations.

Scientists indicate that ending the hunting of a single species could have far reaching and disastrous consequences for African ecosystems. Researchers from the University of Pretoria in South Africa have determined that if just lion hunting alone ended in Mozambique, Tanzania and Zambia, some 14,811,002 acres of wildlife conservancies would suffer severely decreased economic viability for use as wildlife habitat, and the ecosystems they protect would be vulnerable to development.

Counter-Poaching
While the scope of development threatens Africa’s wild places, poaching and illicit wildlife trafficking are robbing those places of the wildlife that makes them so iconic. According to CITES, the Convention on International Trade in Endangered Species, poaching and illicit wildlife trafficking is a $20 billon year global business that is fueling corruption and instability across Africa. As the world works to confront this multi-faceted challenge, hunters are leading the way to stop poaching by providing funding and other resources while anti-hunting extremists only offer rhetoric.

In Tanzania, the Friedkin Conservation Fund (FCF), a non-profit organization financially backed by hunting concessionaires, fields 120 full-time anti-poaching guards who operate over 6.1 million acres—an area equal in size to Everglades, Glacier, Grand Canyon and Yellowstone National Parks combined. These anti-poaching guards have been responsible for apprehending an average of 1,950 suspected poachers each year in wildlands bordering special places such as Serengeti National Park. In a highly publicized incident in early 2016, piolet Roger Grower, who was flying anti-poaching missions for the FCF, was killed when his helicopter received weapons fire from elephant poachers below.

In Zimbabwe, the Dande Anti-Poaching Unit (DAPU) is a cooperative effort between rural communities and hunting concessionaires in the 500,000-acre Dande Safari Areas, a game-rich wildland complex that is home to elephant, lion, leopard and other iconic wildlife. Funded completely by hunter’s dollars, the 22-man unit succeeded in reducing elephant poaching in the area by 90 percent over four years. In emerging economies like Zimbabwe, the DAPU proves to be a critical force-multiplier for anti-poaching rangers of the Zimbabwe Parks and Wildlife Authority, who also depend on hunting revenues for as much as 90 percent of their annual operating funds.

Wildlife Restoration
While the world strives to end the poaching epidemic, what is often not discussed is the fact there are more rhinos in places such as South Africa today than there were only a generation ago. This is almost exclusively due to community and private hunting programs that created the necessary economic incentives to restore large numbers of these animals.

According to a report from the Property and Environment Research Center, South Africa’s Southern white rhino population numbered only 840 animals in 1960 and it was illegal to hunt them.  In 1968, when hunting for the species reopened, the number had increased to just over 1,000.  Over the next four decades, as hunting expanded and landowners realized the value of breeding rhinos and conserving their habitat, the number increased to more than 18,000. According to the IUCN (International Union for Conservation of Nature), this success has made South Africa home to 93 percent of Southern white rhinos, making it one of the last strongholds of this rare species.

About the Author
Catherine E. Semcer is Chief Operations Officer of Humanitarian Operations Protecting Elephants (H.O.P.E.), a U.S.-based non-profit organization that provides training, advisory assistance and procurement services to African anti-poaching programs by leveraging the skill sets of U.S. veterans and the capacities of commercial businesses. A longtime hunter, Semcer is also a member of the International Union for Conservation of Nature’s (ICUN) Sustainable Use Livelihoods Specialist Group (SULi), a global-expert network that promotes both conservation and livelihoods through enhancing equitable and sustainable use of wild species and their associated ecosystems. You can support H.O.P.E.’s efforts to secure a future for Africa’s wildlife by visiting www.saveivory.org.
*Please note that the opinions expressed in this article are strictly her own.