An avid hunter, Sheehan previously served as director of the Utah Division of Wildlife Services, where he worked for 25 years prior to leading the USFWS under the Trump administration. In that role, he said he’d promised WSF CEO Gray Thornton that Utah’s sheep numbers, which were only 300 in the 1960s and are now at 4,500, would reach 10,000 one day. “Now, being in D.C. at the U.S. Fish and Wildlife Service,” he said, “I will need to work on that goal from a couple thousand miles away.”

Sheehan, like the rest of us Sheep Show attendees, has a passion for wild sheep and their enhancement. He talked of his own Dall sheep hunt and the thrill that comes with hunting such an amazing animal in some of the world’s most remote country, where man cannot control every element of his environment, in places where one must give heed to dangers such as hypothermia and slippery ledges that can end a hunt or a hunter. But just as man can be made vulnerable in these places, so, too, can sheep.

“While hunters sustainably harvest a very small part of the sheep population each year, we know the real threat to wild sheep is population level die-offs from disease, loss of habitat, or in areas where predators key in on isolated sheep populations, driving them down to non-recoverable levels,” Sheehan explained. He referenced the crucial partnerships between states, the federal government and conservation groups and, most importantly, hunters. 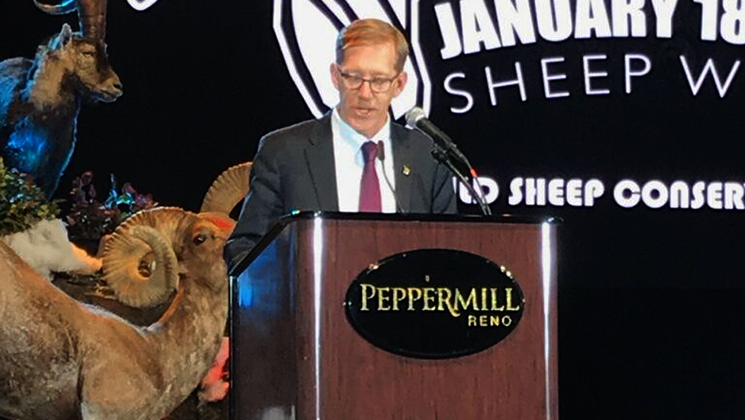 Acknowledging the hunter’s critical role in wildlife conservation, he spoke about the great position American hunters are in under the Trump administration with former U.S. congressman and Navy Seal commander Ryan Zinke at the helm as the U.S. Secretary of The Interior.

“As he [Zinke] has built his administration, he has taken proactive measures to strengthen the role of hunters so they can continue to provide a strong conservation legacy,” Sheehan said, starting with making sure his politically appointed staff members are all hunters and anglers. Combine that with Zinke’s Secretarial orders to enhance conservation stewardship, encourage hunting and fishing recruitment, and increase sportsmen’s access to the hundreds of millions of areas under DOI control and we see what can be accomplished when actions speak louder than words. However, with only two out of three U.S. wildlife refuges allowing hunting and just more than half permitting fishing, Sheehan said there is still work to be done.

Sheehan’s final words were right in step with the NRA and NRA Hunters’ Leadership Forum as he cautioned against the evolving societal disconnection to wildlife and wild places; the belief by our changing society that regulated hunting is what is causing the decline of some wildlife species worldwide; and that poaching is hunting. While everyone in the room understood what hunters have brought to wildlife conservation over the past century—and how nearly all species have rebounded from the work funded by hunters and anglers—he emphasized that our story is not getting out.

The result: “Urbanization and societal pressures are keeping people away from the sport, or making those who do not hunt more fearful of disclosing their interests to the public through pictures and social media. … Even as hunters, we have become fearful of extoling the virtues of our favorite pastime.”

So what do we do? He said we come together as hunters to communicate that sustainable, regulated hunting is acceptable; that the meat we harvest is a healthy, necessary source of protein; and that mankind is hard-wired to responsibly use our wildlife just as our forefathers did before us.

“And as we work to solidify hunting and conservation for the future,” he added, “I would ask that you take the time and effort to take a young person, friend, neighbor, co-worker or another into the field for a first hunting trip.” And in the meantime: “I want you all to know that this administration, including Secretary Zinke and myself, understand your interests and passion for hunting and will continue to fight for your hunting rights and opportunities.”

Coming Full Circle: Back to the Sheep Show
So as the WSF goes about the business of ensuring the future of wild sheep, it is no wonder it is comprised of and funded by American hunters. The WSF is just one more example of what we American hunters do behind the scenes to protect our natural wildlife resources. Based on what I’m seeing here in Reno, wild sheep have a bright future.

The WSF’s wildlife-recovery success story is truly remarkable. Since its inception more than 40 years ago, it has raised more than $115 million for wild sheep conservation. Through its many initiatives, the WSF reports that the numbers of Rocky Mountain, California and desert bighorn sheep have increased threefold in North America—from around 25,000 in the 1950s to 85,000 today. In fact, several states are reporting 200 percent increases in their wild sheep populations, with Oregon’s numbers up by 2,000 percent.

Considering all of this, how could any hunter not enjoy attending the 2018 Sheep Show? While we attendees all share a love of hunting, it’s important to note our overriding common denominator. We’re here to have fun, but front and center is a pure passion to help advocate for the long-term health and sustainability of wild sheep and their habitat. It really is that simple.

As a testament to the WSF’s commitment, check out its June 2016-June 2017 annual report tracking expenditures totaling $4,714,965 in support of wild sheep conservation.