As Texas hunters gear up for the kickoff of the firearms mule deer season on Nov. 17, some will have new antler regulations to contend with, but they will also have a chance at some worthwhile rewards if they participate in weigh-station data collection. Texas Parks & Wildlife (TPWD) reached out to NRA Hunters’ Leadership partners such as the Dallas Safari Club (DSC), the Texas Panhandle Chapter of the DSC, the Mule Deer Foundation (MDF) and the Houston Safari Club asking for donations. The organizations answered the call with such items as rifles, lifetime hunting licenses and gift cards. The more data, the better, and by making the effort voluntary—and rewarding the extra effort—conservation managers hope hunter participation will be robust.

Corey Mason is executive director of the Dallas Safari Club, but he's also a lifelong hunter both at home and abroad. His Bachelor of Science and Master of Science degrees specialize in wildlife management. Professionally he is a certified wildlife biologist and served as a regional director for the TPWD. He believes is is important with the DSC's emphasis on utilizing science to manage wildlife, that whenever possible the club support agencies in their efforts to incentivize hunters to contribute to that science. Not only will this program improve age class structure and sex ratios, but it will enrich hunting both now and into the future.

Charlie Stockstill, Texas and Oklahoma regional director for the Mule Deer Foundation, added that the MDF contributed to the five-year study in conjunction with the TPWD that determined the current health of the mule deer herd in the Panhandle. It was a landowner who suggested the antler regulation program, noting that although land owners may initially lose money from hunter dropoff with the new regulation, within two years, those same landowners will more than make up for their losses with the improved mature buck age class structure.

So what are the new regulations? TPWD is implementing the experimental mule deer antler restriction regulation this season and for the next three seasons in the Southeast Panhandle. Of the 74 Texas counties with a mule deer season—all with their own bag limits—six have been selected for the project: Briscoe, Childress, Cottle, Floyd, Hall and Motley. Harvested mule bucks must have a main beam outside spread of 20 inches or more. The purpose of restricting hunting pressure on younger bucks (1 ½ to 4 ½ years old) is to improve the buck age structure and to balance sex ratios. The program follows a similar antler restriction for white-tailed deer that successfully shifted the age structure toward older bucks. It remains to be seen if it will work for mule deer, since, as Stockstill mentioned, they are not as adaptable as their woodland whitetail counterparts.

TPWD set the minimum legal outside spread of the main beam at 20 inches based on years of harvest data. Conveniently, the average ear-tip to ear-tip spread of 2 ½- to 8 ½-plus-year-old mule deer bucks with ears in the alert position is about 21 inches. In the field, hunters will be able to use that information to judge whether the buck they're hunting is legal or not. Hunters can even print out an illustrative graphic, which also reminds them that mule bucks with at least one unbranched antler cannot be harvested unless the outside spread of the main beam is 20 inches or more. 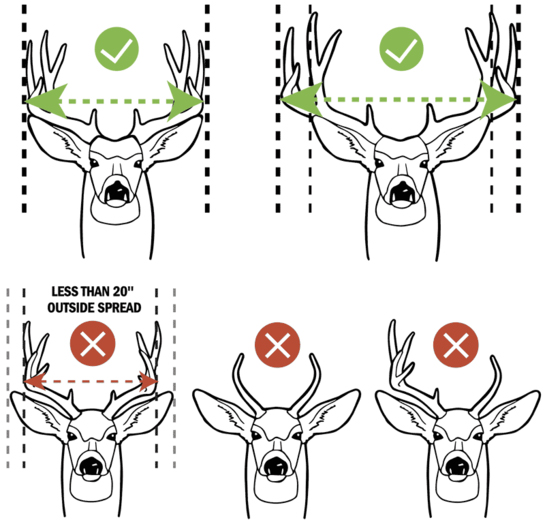 This handy graphic illustrates how hunters can use the mule bucks ears, tip to tip, as a guide. The main beam outside spread should be 20 inches or more, and conveniently, mule deer ears, tip to tip, usually average 21 inches.

Of course, new regulations are often met with both concern and complaint, and the TPWD built a highly detailed Frequently Asked Questions (FAQ) page that addresses many if not all questions. Here are a few highlights from the easy-to-read and clearly written responses.

• Why use the outside main-beam spread rather than points or other measures?

Unfortunately, points are not a good indicator of age. Many young bucks would meet, say a 4-points-on-one antler restriction, and if taken, would negate the benefits of balancing the age structure. In addition, using the alert ear-tip to ear-tip measure is expedient in the field and ensures that hunters have a viable means of verification so that the program can have a reasonable expectation of success.

• Why not just open a doe season to close the sex ratio gap?

Antlerless hunting permits are a good management tool for population control. However, the Texas mule deer population—based on the lack of an over-consumption of vegetation—is not exceeding its carrying capacity. The problem is the over-harvesting of mule bucks. Where the population is over-abundant, limited doe permits are indeed issued, but that is not the case in the counties in which this experiment is taking place.

Three things contribute to inferior antlers: age, nutrition and genetics. Culling bucks with inferior antlers does not mean that only large-antlered bucks will mate with females, and that would only be half the genetic equation anyway, since does contribute the other half of the genetic antler mix. Studies on such approaches within white-tailed deer populations have yielded no improvement in the percentage of big-racked bucks. Nutrition can be managed through population control where necessary, but, again, that doesn't apply in these counties. By simply allowing younger mule bucks to mature, the hunter improves the percentage of large-antlered mule bucks in the future.

Similarly, spiked mule bucks are usually 1 ½ or younger, or have been subjected to drought conditions. Allowing them to live increases the likelihood of more fuller-racked mule bucks in the future.

• What about properties within the Managed Lands Deer Program (MLDP) Conservation Option?

MLDP properties will be exempt because they are already conservatively managed to preserve older buck age structure and closer sex ratios.

• Won’t this plan encourage hunters to leave mistakes in the field and possibly take another buck?

If something like that is happening, it needs to be reported. There is no way that the white-tailed deer experiment could have been successful if such activity was going on in significant numbers. There would be no way the age structure could have shifted if so many bucks were dying. Education outreach and a strong game warden presence combine to make such occurrences negligible.

• The best part: using the program to groom tomorrow's hunters

Perhaps the most significant discussion is the one surrounding new hunters and whether the added restrictions will discourage them from the sport. The response from TPWD shows that not only is this program good for the mature mule buck population, resulting in more satisfying hunting going forward, but it is exactly the kind of regulation that hunters can use to enrich the experience for both youths and first-timers.

Here was the TPWD response:

In other words, without hunters mentoring the next generation and newcomers, there is no conservation. The very act of following the mule deer antler restriction regulations will encourage such behavior across all regulations on all species, fostering an enriched and enriching hunting lifestyle for generations to come.