More
SUBSCRIBE
In 2005 my wife, Katy, who is a school teacher, came home from work one day and said there were two kids in her school whose father had been put in prison. She explained that she signed them up for a free, day-long youth hunting camp called Scooter’s Youth Hunting Camp (SHYC), and then she added that she wanted me to take them to the camp and then take them deer hunting.

What? I don’t want to sound self-centered but the camp is held the first Saturday in May. Spring in Idaho is a flurry of outdoor activities. Bear hunting is hot and heavy, turkey hunting is on, crappie are going ballistic, “whistle pigs” are coming out in droves and the wild mushrooms are popping up.

Well, I was stuck. She’d already mailed in the application and they were registered to attend. D-day came and we headed up to the little mountain town of Emmett, Idaho, where the camp was being held. I quickly realized this was a big event. The kids were divided into six groups and rotated among six different stations. In between stations, seminars were put on by various pro-staff instructors—great seminars that I enjoyed as much as the kids did. The hunting camp was awesome, and I had to get involved and help with it.

Fast-forward 14 years and now the camp has grown to the point that we camp volunteers use online registration. For 2018, 260 kids registered in 47 seconds. For those who are interested in helping to start a hunting-related camp in their neck of the woods, here is how we run Scooter’s Youth Hunting Camp. 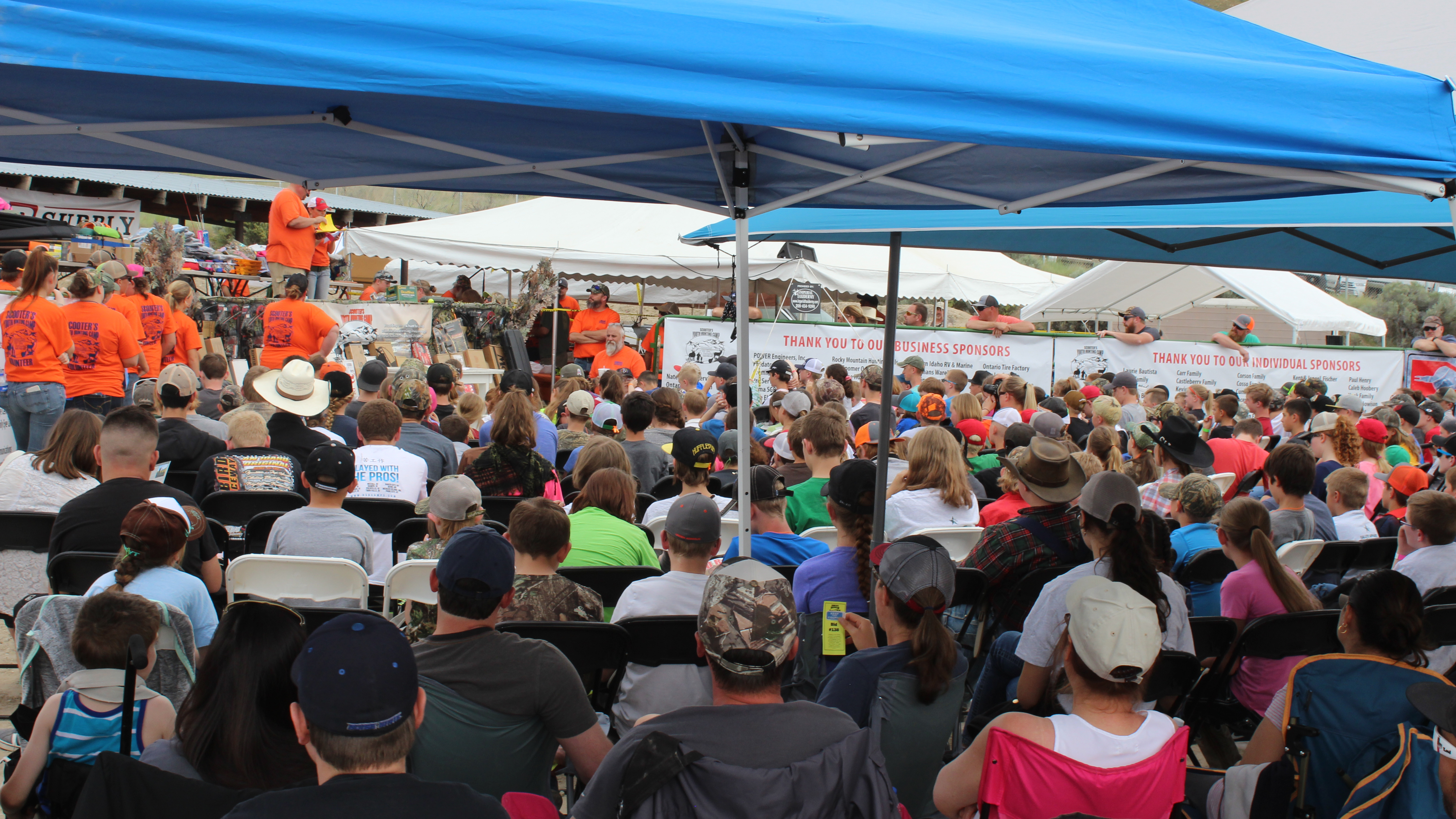 If you're serious about doing something to save hunting, you'd be hard pressed to find a better way than to reach out to kids through a hunting camp. Before you know it, you'll be mentoring tomorrow's hunters, keeping our rich heritage alive. (Images by Ron Spomer Outdoors)

Participants arrive at 8:30 a.m. to sign in and are given a bracelet signifying which of the six groups they’re in and they’re given a bag filled with goodies donated by various companies. For instance, Blue Lizard gives them a package of sunscreen.

The Pledge of Allegiance is said, many times led by an enlisted serviceman, some about to head out for duty. A prayer is then given by a local pastor and it’s off to the races. Group one starts at the shotgun station, group two at the .22 range, group three at the blackpowder range, group four at the archery range, group five at the knife sharpening/gun cleaning station and group six at the survival station.

When it is time for a seminar, the young hunters gather in the common area. Top-notch presenters include industry professionals such as Rockie Jacobsen, owner of Rocky Mountain Game Calls, who puts on an elk-calling seminar. (His son Cory, by the way, is a nine-time world champion elk caller.) Afterward, everyone rotates to his or her next station. Volunteers serve lunch and snacks throughout the day, all of which the kids eat free, thanks to donations from local businesses. In fact, the local doughnut shop, HeBrews Coffee in Emmett, sets up a doughnut trailer. I eat my fair share of the cinnamon-sugar treats.

A raffle table is set up during the camp with proceeds specifically set aside to help fund the next year’s camp. At the end of the day the drawing is held—and every kid wins a prize. And I don’t mean a rinky-dink gizmo. This year there were 25 guns, 10 bows, backpacks, knives and more given away. Some kids are super lucky and win an actual elk, deer or duck hunt with a few of the volunteers. Where was SYHC when I was a kid?

There is no way I can list every generous sponsor, but I will name just a few: Birchwood Casey, Blue Lizard, Cabela’s, Knives of Alaska, Otis, Puma SGB Knives, Sig Sauer Airguns, Smith’s Consumer Products, Sportsman’s Warehouse, Spyderco, Swab-it’s—and the list goes on.

I know this is a business opportunity for these companies, which donate products in part for advertisement, but every year I am touched by the generosity of the outdoor world. The kids get to attend the camp, which for some is their first exposure to outdoor adventure, because of the kindness of the volunteers and sponsors.

In case you are wondering how this camp came to be, one day I figured out exactly why Scott “Scooter” McGann established it. If it hadn’t of been for his grandad, he and his brother probably never would have ended up being the sportsmen that they are today and would have missed out on the fun and excitement of a lifetime spent in the great outdoors. He originally launched the camp as a way to help single moms, but then he couldn’t turn away kids from two-parent households. Years later, the camp continues to have a tremendous impact on these kids. Here is just one example of the importance of making sure kids understand the hunter’s vital role in wildlife conservation.

I used to work with a lot of Hispanics so one year I got quite a few of their kids to attend. After a little Costa Rican girl had attended camp, she went on to set the record straight about hunters’ critical role in wildlife conservation. She was in school one day when another student was telling fellow students that hunters were annihilating all of our wildlife. This little girl stood up and said, “No they’re not. I learned in Scooter’s Youth Hunting Camp that it is because of outdoorsmen that we have self-imposed hunting regulations—and that there are actually more deer in America now than when Columbus discovered it.”

I do 50 to 60 seminars/shows per year from Texas to Las Vegas to Alaska. This is probably the coolest event I participate in all year. You ought to think about doing one in your community. You don’t have to be super knowledgeable or talented. Just have a servant’s heart and a willingness to make it happen, just like Scooter McGann. For more good news on the youth hunter education front, for anyone who is not aware, the NRA has a program call the NRA Youth Hunter Education Challenge, which immerses kids not just in rifle, shotgun, muzzleloader and archery hunting methods but also in hunter safety, map-and-compass orienteering and so much more. There's no better place to start your camp.

About the Author: Outdoor writer Tom Claycomb III lives in Idaho. He publishes 325 articles and conducts 50-plus seminars per year. He serves on the pro staffs of several hunting companies and enjoys field-testing hunting and fishing gear year round.