Few people in America’s collective hunting and shooting sports community are more notable than NRA and SCI members Larry and Brenda Potterfield, owners of MidwayUSA, who for decades have used their business success to become two of the hunting and shooting sports industry’s leading benefactors. Last night they were recognized for their service and dedication during the 46th annual SCI Hunters’ Convention here in Las Vegas, Jan. 31-Feb. 3, taking prestigious honors with the C.J. McElroy Award.

Named for SCI founder C.J. McElroy, the award honors members of the worldwide hunting industry who have made tremendous contributions to the sport of hunting; achieved worldwide hunting excellence; demonstrated dedication to wildlife conservation; and have a history of service to the global hunting community and to SCI goals. Here are just a few of the duo’s much appreciated and respected accomplishments:

• In 1992, the Potterfields founded the NRA Round Up program, which askes MidwayUSA customers if they want to round up their purchases to an even dollar amount. To date, MidwayUSA customers have contributed more than $14.2 million to the NRA Institute for Legislative Action through “rounding up.”
• In 1992, they also helped to found the Friends of NRA, which has raised more than $740 million for the NRA Foundation.
• In 2007, they established the MidwayUSA Foundation, which has provided more than $17.8 million in financial support to more than 2,600 youth shooting teams.
• Since 2008, the Potterfield family has made over $168 in charitable contributions, meeting the benchmark IRS 50 percent maximum contribution level since 2011.
• In 2012, they started the Youth Wildlife Conservation Experience, which has provided opportunities for more than 1.2 million young people to learn about conservation, hunting and the shooting sports.
• In 2014, the NRA presented them with the Life of Liberty Leadership Award for continued leadership in the development of programs supporting the Second Amendment.
• Also in 2014, they received the Outdoor Channel’s Honorary Lifetime Achievement Award for their contributions and activism within the outdoor community.
• In 2015, they were presented with the Beretta Conservation Leadership Award for their exemplary leadership in wildlife conservation.
• Also in 2015, they were presented with the John L. Morris Award for leadership in conservation and a commitment to fish and wildlife stewardship.
• In 2017, they received the Peter Hathaway Capstick Hunting Heritage Award honoring their significant contributions to wildlife conservation and wildlife habitat.

• And, last but not least, in 2017, the Potterfields were recognized by the NRA Publications Division with the 2017 NRA Golden Bullseye Pioneer Award for their excellence and innovation in the firearm and hunting industry, marking the  first time a husband-and-wife team have been so honored. 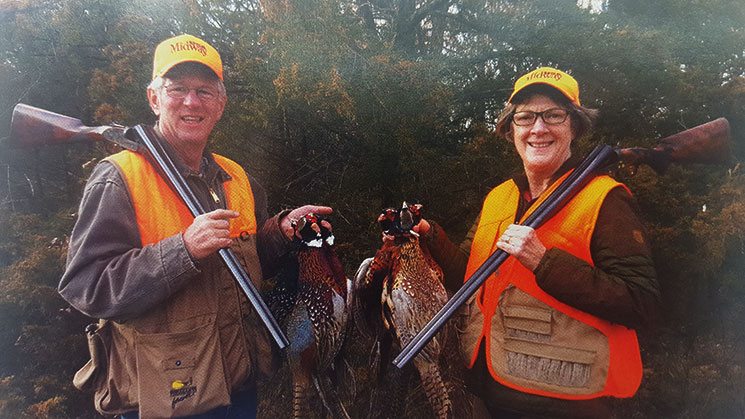 All things considered, is there anyone more deserving of such an award than Larry and Brenda Potterfield? The collective hunting and shooting sports community’s gratitude cannot be put into words as this humble duo quietly continues to work for the greater good, fostering  hunting, shooting sports and wildlife conservation so that future generations will be able to enjoy our all-American outdoor traditions. Congratulations to Larry and Brenda!