The Wisconsin Department of Natural Resources (WDNR), under the direction of Governor Scott Walker, recently launched a five-year study on the effects of Chronic Wasting Disease (CWD) and predators on whitetail deer in the southwestern part of the state.

Marking the most all-encompassing CWD study in Wisconsin history, research began in 2016 with the trapping of coyotes and bobcats in a preselected area and is continuing this winter with the trapping of deer to determine the extent of CWD infections and deer mortality. According to WDNR officials, “The goal of this project is to comprehensively examine factors that could impact deer survival and deer population growth in southern Wisconsin. Those include Chronic Wasting Disease, predation, habitat suitability and hunter harvest.”

The timing of the study is important as CWD is a prion-based disease that is always fatal to deer and remains a source of concern for wildlife officials across the continent. The WDNR says the study is designed to determine deer survival rates over a specified period for both infected and uninfected deer and determine whether the disease is the primary cause of death or merely a contributing factor. As noted in the study synopsis, CWD could be making deer more vulnerable to other sources of mortality (predation, vehicle collisions, hunting, etc.) because infected deer ultimately become less aware of their surroundings, less responsive to stimuli and less physically coordinated.

According to the study’s first-year results, as reported by the Milwaukee Journal Sentinel on Feb. 28, deer with chronic wasting disease died at three times the rate of uninfected animals, amounting to a 75 percent annual mortality rate of CWD-positive deer compared to 25 percent in those without the disease. The WDNR attributed the higher mortality of CWD-positive deer directly and indirectly to the disease.

Much of the study’s initial efforts has involved trapping deer and predators and placing telemetry collars on them to help identify patterns in movement, overall health, predator-prey interaction, habitat preferences and, ultimately, mortality causes. Trapping in the study area is primarily conducted during the winter months. So far biologists have captured and collared 268 deer, 21 bobcats, and 39 coyotes, though winter whitetail trapping is particularly labor intensive. At one time, darting the animals with tranquilizers was the standard procedure, but that is no longer the case.

As WDNR officials explain, “While darting is available to us, we almost never go this route. … Compared to drop nets, the deer are more likely to escape (darts miss, nets don’t) and the dart hitting the target is not the end of the capture. Unlike in the movies, a darted animal doesn’t drop to the ground as soon as it’s hit. A darted deer may move several hundred yards before the sedation drug takes effect.”

Fortunately, volunteer hunters, trappers and landowners continue to assist with the study. And now, with the second year of trapping underway, the Safari Club International (SCI) Wisconsin Chapter also is stepping in to assist. When the group heard about the study, Wisconsin chapter board member Dan Trawicki contacted the WDNR to ask how SCI could help. Conversation turned to the fact that while the drop nets are the preferred capture method, such nets are heavy and bulky, and it takes a team of field personnel to do the job.

In a news release from the WDNR, Trawicki stated, “I talked with Dan Storm, (WDNR’s deer and elk ecologist) and he said, you know, the biggest obstacle we’re having is getting back into these trapping areas. And he said if you guys could do UTVs [Utility Terrain Vehicles] that would be cool. I said that works for us.”

The SCI Wisconsin Chapter delivered two new Arctic Cat side-by-side UTVs earlier this year, which have been used almost continuously to haul crews and gear to the remote trapping sites. 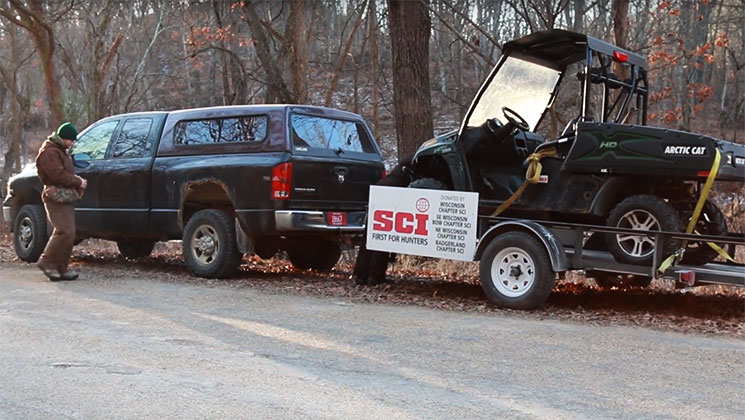 Mike Watt, deer coordinator for the study, said, “There are a lot of properties that are inaccessible by pickup. Walking in all our gear and heavy trapping equipment just isn’t practical. … UTVs are great because they can haul three people each, all the gear, and they can navigate the narrow, winding trails often found on the properties where we work.”

The WDNR is so appreciative of the donation that it produced a short YouTube video showing the vehicles in use.

Trawicki also points out that every year Wisconsin SCI chapters donate between $300,000 and $350,000 to conservation projects like this one. According to Trawicki, “The majority of our members are regular people who just like to hunt—you know, ducks, bear, deer, Wisconsin turkeys, et cetera. It’s not a safari club. It’s SCI: First for Hunters.”

How Area Residents Can Get Involved
With four more years to go in the five-year study, the WDNR is looking for volunteers to assist in the following areas:

• Become a participating landowner within the study areas and allow field crews to capture and radio-collar deer and predators for research.
• Volunteer to assist field crews with deer trapping (in the winter) and fawn capture (in the summer).
• Report incidentally-caught bobcats and coyotes caught within the study area boundaries to research staff by calling 715-577-6288.
• Become a Snapshot Wisconsin volunteer to help the WDNR monitor deer year round using a network of trail cameras, creating a unique opportunity for individuals, families and students to get involved.
With all of the opportunities to help, no doubt hunters and trappers across the state will continue to lead the way in supporting Wisconsin’s wildlife conservation projects. For more information, please contact the WDNR research team at: [email protected].
IN THIS ARTICLE
Wisconsin CWD Deer Study WDNR Wisconsin CWD Chronic Wasting Disease Study SCI Effects of Chronic Wasting Disease Keith Crowley HLF Hunters Leadership Forum
More
SUBSCRIBE
RELATED
Washington Governor to Be Sued for Appointing Anti-Hunters to Wildlife Commission
News
Hillsdale College Honors Veterans with a Free Day of Shooting Sports
Federal Funding Approved to Battle Chronic Wasting Disease
News
This Christmas: Hunt Down Hunger!
News