As the American hunting community searches for ways to dam the downhill slide in hunting participants, some industry leaders have proposed that focusing efforts on millennials instead of younger audiences may have more positive impact.

Recently, as reported in NRA’s American Hunter, John Frampton, CEO of the Council to Advance Hunting and the Shooting Sports (CAHSS) indicated during the inaugural R3 (Recruit, Retain and Reactivate) National Symposium, that “…agenc[ies]—and hunting-industry resources—would be better spent by focusing more on millennials… [as they] are the nation’s largest population segment and, as recent hunting-license sales show, they’re now buying more licenses than are baby boomers …”

Frampton noted, “Millennials provide a far larger pool of prospective hunters to recruit than baby boomers provide to reactivate.” He further explained that unlike teenagers and youngsters, once millennials learn to hunt, they can buy their own licenses, acquire their own gear, locate places to hunt, drive themselves to those sites and one day train their own kids to hunt. It’s basically a five-for-one deal for hunter recruitment efforts.

The director of Alabama’s Wildlife and Freshwater Fisheries Division (AWFFD), Chuck Sykes, agrees and already has his division addressing the opportunity via Alabama’s Adult Mentored Hunt (AMH) Program designed to provide “a new hunter or a hunter with limited experience a one-on-one hunt under the guidance of a veteran mentor. The minimum age requirement is 19.

Justin Grider, Alabama’s AMH program coordinator, indicated AMH is designed to be a nontraditional path to becoming a hunter, a way for someone with an interest in hunting but with no clear avenues in which to pursue it.

“We saw the decline in license sales and in 2015 started a one-day adult mentored hunting program. In 2017 we built a three-day-weekend schedule and had 130 applicants from five states apply for the 18 hunts we planned. We ended up with 104 hunters. Most of the hunts were deer hunts but we also had hunts for turkey, squirrel and rabbit.” Grider said.

AMH Program events are conducted in a safe and constructive environment and provide participants with the opportunity to learn from well-skilled hunting mentors. To this point in the program, most mentors have been AWFFD employees but Grider indicates they are seeking more mentors from the sportsmen’s ranks. (Click here for a Mentor Application.)

Participants register for a full schedule of learning and hands-on “doing” and are exposed to many facets of hunting, including: an introduction to hunting and conservation, bow and firearms safety, shooting at a range, actual hunting, wild game care and cooking, and more hunting. The weekend programs typically last from noon on Friday until noon on Sunday. Generally, the equipment needed to participate is provided or offered at no charge.

One of the participants in a turkey hunt said, “…you did a great job. From making everyone feel welcome the first night, patterning the shotguns, cooking meals and spending time in the woods with individual participants—job well done. I also really appreciated all of the instruction that you and the other mentors provided. I really did not know what to expect from this experience when I first applied, but it exceeded every expectation imaginable! I was blown away by how the hunting process works, and I was thrilled to harvest my first bird.” 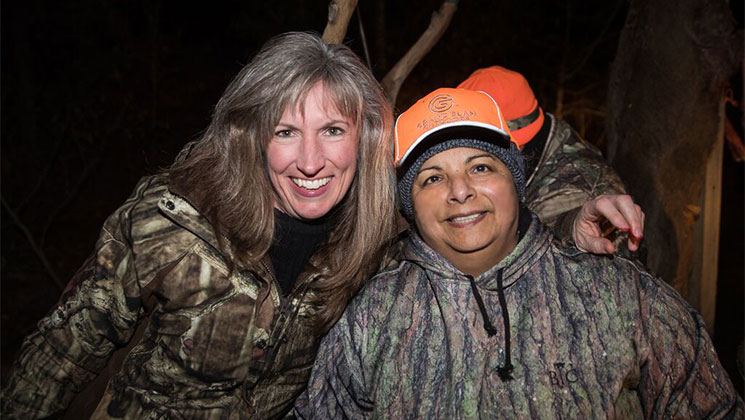 Another participant from one of the deer hunts reported, “I probably wouldn’t have changed a thing about it. Even if we did not get to hunt, just the amount of knowledge that was shared would have made it worthwhile. The chance to hunt was just an added bonus in my opinion.”

Dates for the 2018 AMH hunts will be established in early fall. Those interested in participating can find applications, requirements and details on the selection process by clicking here. AMH Program Coordinator Justin Grinder conducts all program correspondence through email at  [email protected].

Alabama’s AMH program is just one of many nationwide implementing new strategies to bolster America’s hunting heritage and overall participation. As new research and experience in the R3 field comes to light, we can be certain sportsmen and the outdoor industry will apply the best practices to solidify our place in the future.