While American hunters widely recognize the U.S. Forest Service, Bureau of Land Management and other federal agencies as gate keepers of public lands that permit hunting, did you know there are millions more acres of overlooked public lands available for hunting?

One such place I discovered was near a small airport out West on the edge of a mid-sized town’s city limits. There were pronghorns there, and I’d drawn a pronghorn hunting tag in that zone. This parcel was a mere 200 acres in size, most of which could be observed from a prominent high-ground point. It was from there that I spotted a herd standing along the tract’s east border. I crept into a narrow canyon and moved closer. I waved a flag and drew the curious pronghorns toward me close enough for a successful shot. In less than an hour I had filled my tag. Strangely, I saw no other hunters on this land or on nearby tract of public land I hunted successfully the following year. These overlooked public tracts can be real gems. A little detective work can lead you right to them so you can sidestep the pressure found on the more recognizable public lands that permit hunting.

1. State Forests
A top place to look is state forests. States often have these tracts of land to benefit the good of the public through timber sales, many of which permit hunting. One example is the 8,500-acre Mississippi Headwaters State Forest in northern Minnesota. It’s open to hunting and has nearly 100 lakes within its borders that are near the origin of the Mississippi River. At the other end of the river in Mississippi, that state has numerous Wildlife Management Areas (WMAs) that have special places prepared for wildlife, such as dove hunting fields, and offer numerous draw opportunities to hunt some premium areas.

Over in North Carolina, the state’s wildlife resources commission manages more than 80 game lands statewide. One example is the 11,000-acres-plus Suggs Mill Pond in the state’s eastern region. The tract has waterfowl impoundments plus places to hunt deer and small game. Online maps show roads and trails, gates, parking areas and also a couple of places with hunting blinds for disabled sportsmen. A regional headquarters on Lake Road offers additional details, or click here for more information.

Another N.C. example is Thurmond-Chatham Game Lands that spans more than 6,500 acres in Wilkes County. In addition to roads that are open to deer and turkey hunters, the site has designated campsites for use by hunters. There are also special permit-use roads for disabled hunters to access to some areas.
Inquiring at regional forest service offices or soil conservation headquarters can lead you to the gate of state forests and other lands often managed by the state’s department of natural resources.

Some of these forests, if smaller tracts of land, also require special entry permits and sometimes host special youth hunts. Nearly every state across the South has special state-owned lands—labeled as game lands or WMAs—that are open to hunting. Some could require additional stamps, permits or small fees to gain access for hunting. Again, questions and online research can help you discover these places—and the hunting opportunities available.

2. State Parks
Also often overlooked are state parks. Yes, sometimes these places that are better known for picnics and long hikes are also open to hunters. Wisconsin, for example, has more than 50 state parks that permit hunting, especially in attempts to control deer populations, and most are open to hunting. Some are restricted to archery or muzzleloader hunting only. Minnesota, New York, Ohio, Pennsylvania and numerous other states permit hunting in, or within certain areas of, state parks. For details, click here.

Another example of state park opportunities, Brandywine Creek State Park in Delaware permits hunting but has specific regulations. Hunters must pay fees, attend a meeting at 5 a.m., and only hunt in assigned stands allotted through a drawing. Hunters also must shoot an antlerless deer before being allowed to shoot an antlered deer. But wording in the regulations should catch the attention of most hunters: “Significant deer damage is still apparent….” The state has eight such parks that are open to some form of hunting. The good news is that there are detailed online maps for many of these areas for planning your hunt.

3. State Trust Lands
Another source of public lands open to hunting are state trust lands, originally established by the U.S. Congress to benefit schools through various activities ranging from grazing leases to timber harvests and mining. Montana and Wyoming, for example, are dotted with these parcels, as are Oregon, Idaho and California. Today these tracts can be a place to hunt deer, elk, pronghorns or other species. Most tracts are easily located on a map. Colorado reportedly has more than 3 million acres of state trust lands. 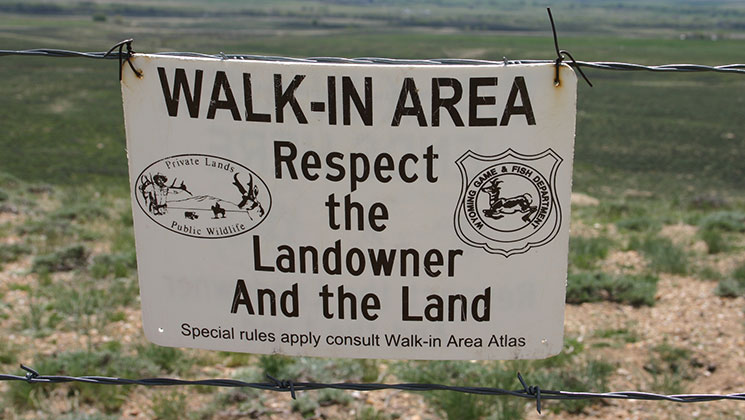 Land Opportunities for the Public: WIAs
Walk In Areas (WIAs), where private property becomes open to hunters who are willing to take a hike, can be found in a large number of states. States such as Wyoming and Kansas have these areas. Kansas, for example, has more than 1 million acres of private property now open to hunters to hunt at no additional charge. Though the majority of the Kansas acreage provides good-to-excellent upland game-bird hunting, some areas also provide opportunities for deer, waterfowl and squirrel. Landowners receive a modest payment in exchange for allowing public hunting access.

State Game Agencies and WIAs
Many state game departments are now pursuing such type leases or agreements. Additional details on the Kansas WIA opportunities for those willing to walk are available here. You could also encounter WIAs in Iowa, Nebraska, Minnesota, Montana, Oklahoma, Missouri and other states.

As you can tell, beyond the sprawling federal lands are other acres where hunters can find hunting opportunities. The great news is that most state game departments have online guides and printed booklets to guide you in your search for places to hunt. Kansas, for example, publishes the annual Kansas Hunting Atlas, a 60-page booklet covering Walk-In Hunting Areas (WIHA) along with state and federal lands. It also provides details on rental cabins in state parks and wildlife areas, plus information on game species from sandhill cranes to doves and deer. Small and large tracts dot each page of the booklet. Click here for details and find a gem of your own.