For Virginia’s young Jon Holt, upland bird hunting was just what you did. Friends and family gathered in groups or in pairs as the hunting heritage was passed from one generation to the next. As Jon grew older, he and his father also hunted deer together. By high school, he and his friends hunted, fished and trapped everything that had a season, immersing themselves in learning the habitats of their quarry. Little did Holt know that the deep-rooted hunting traditions he’d embraced early in life would one day be the very thing that would soothe both his physical and unseen wounds of war.

On Sept. 11, 2001, the air was warm and morning skies were clear and sunny. Holt was a high-school sophomore sitting in chemistry class when news of the terrorist attack in New York City swept through his school. He and his friends got to the TV in time to witness the second plane hitting the south tower. At that moment, they made a conscious decision that one day they would serve America by joining the military.

In 2003, Holt enlisted in the U.S. Army, serving in support of U.S. border security in Texas and in Hurricane Katrina relief efforts in the Gulf Coast. In 2007, now a sergeant, he was deployed to Iraq to serve in Operation Iraqi Freedom, assigned to a unit in Baghdad that focused on finding and securing Improvised Explosive Devices (IEDs). On the night on Oct. 25, 2007, Sgt. Holt and his team were dispatched to patrol a road. With the A/C unit out in their vehicle, he sought relief from the intense heat by pouring water over himself. Within moments, the team’s mission and Holt were violently stopped short after being punched by an Explosively Formed Penetrator (EFP) specifically designed to penetrate armor. After a deafening, blinding flash, and what felt like tapping on his leg, Holt realized he was on the hood of his vehicle, drenched in his own blood. He recalled how a mentor once said, “If you feel pain your injuries are not that bad, but if you feel a ‘tapping’ sensation then you know it is serious.” While tying a tourniquet, he was attacked again and shot in the leg. Fortunately, reinforcements arrived and Holt soon began the long and difficult journey of surgeries and rehabilitation. The road to recovery was that much more challenging for Holt, who was awarded a Purple Heart, as he endured the unbearable grief from losing his two team members as a result of that October night. 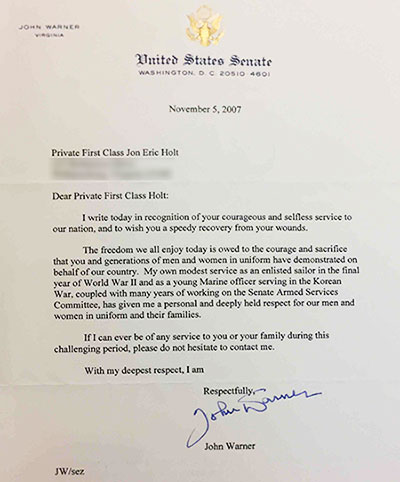 With the wounds of war, both seen and unseen, Holt said only three things stood out to him upon arriving home: the familiar sweetness of the air as he was wheeled off the plane, soothing his flash-burned lungs; the sight of his wife; and the treasured letter he received from then-U.S. Sen. John Warner of Virginia thanking him for his selfless service on behalf of our country. Holt would persevere as friends and family kept him moving forward in his recovery.

Fast forward a few years to when Holt met Bud DePlatchett, East Coast Coordinator and Board member of the military outreach program Freedom Hunters. In 2017, DePlatchett presented Holt with an opportunity hosted by the Wildlife Foundation of Virginia to attend a muzzleloader whitetail deer hunt with four other Purple Heart recipients and a sixth veteran, John Warner, Jr.—son of the former Virginia senator, on John Warner Jr.’s farm in Front Royal, Va.

On the day of the hunt, Holt realized how it is often the little things in life that are the biggest things in one's life. Though chilled in the darkness by the crisp 19-degree air, Holt’s was comforted by memories of his younger years outdoors. Tucked around Holt’s position, also experiencing the healing power of the great outdoors, were the five other veterans, including the four Purple Heart recipients representing the Army, Navy and Marine Corps, all bonded by war.

Sunrise revealed the sweeping colors of orange, yellow and red across the horizon. Squirrels scurried to the ground and the sounds of birds filled the air as the world awakened. As Holt watched deer move into the field, his childhood hunting memories healed his heart. The cool morning air soothed this warrior’s spirit as he watched and awaited the perfect shot. Holt reflected on the importance and persistence of his lifelong friends Ronny and Matt. (After 9-11, Matt was one of the friends who also enlisted, serving in the Marine Corps.) Together they helped him go from merely existing to reconnecting through their childhood outdoor traditions.

Holt reflected on his appreciation to be alive and to once again enjoy his deep-rooted passion for hunting. For Holt, this hunt was even more meaningful as it marked 10 years from the time he was injured and received the letter from then-Sen. Warner that he so treasures. Not only was he getting to shake the former senator’s hand that day, but Warner was present for the hunt.

“It is not often you can look a man in the eye, shake his hand and thank him for the impact his gesture made in your life,” expressed Holt. The former senator, now 91, received a heartfelt in-person thank you for a letter that had showed Holt respect and honor and provided him with the courage to dig deeper into his recovery.

Today the American hunting traditions of Holt’s childhood have been passed to his sons. They continue to soothe the unseen and seen wounds of war. As we approach Independence Day on July 4, few stories could be more fitting.

Remembering Those Who Did Not Make It Home
Army Sgt. David E. “Beau” Lambert, 39, of Cedar Bluff, Va., was killed instantly during the attack on Holt and his two-member team on Oct. 25, 2007. He is remembered as being a soft-spoken and polite. Sgt. Derek R. Banks, 24, of Newport News, Va., passed away on Nov. 14, 2007, following injuries sustained in the attack. He left behind his mother and son.

About Freedom Hunters
Freedom Hunters honors those who protect our American freedoms. The mission of this 501(c)3 military outreach program is empowered by the generous support of many sportsmen, state agencies, outfitters, corporations, landowners and conservation groups such as the Virginia Wildlife Foundation. To learn how you can help, or to apply for a hunt for yourself or another member of the military, please click here. You also can contact Freedom Hunters by email at [email protected]. Visit the group on Facebook at facebook.com/FreedomHunters/.