The international survey research firm Responsive Management (RM) has been monitoring public opinion on hunting since 1995. In 2016, as part of a much larger study on animal rights, the NRA hired RM to conduct one of the largest national survey and focus group studies assessing public attitudes toward hunting, animal rights and animal welfare to continue monitoring trends in attitudes. With public attitudes controlling the debate, the goal was to collect benchmark data to gauge public perceptions and begin crafting messages that resonate with the American public based on its views on hunting to reclaim the narrative and counter messages put forth by animal rights proponents.

In 2019, RM partnered with the National Shooting Sports Foundation (NSSF), with support from the U.S. Fish and Wildlife Service through a Multistate Conservation Grant to continue monitoring attitudes toward hunting, fishing, sport shooting and trapping with key findings summed up in this article. The 2019 study focused again on the important monitoring of trends to keep information updated. The latest trends show a rebound following negative perceptions toward hunting due to the “Cecil effect” in 2015 as attitudes toward sport hunting have rebounded to pre-2015 levels. 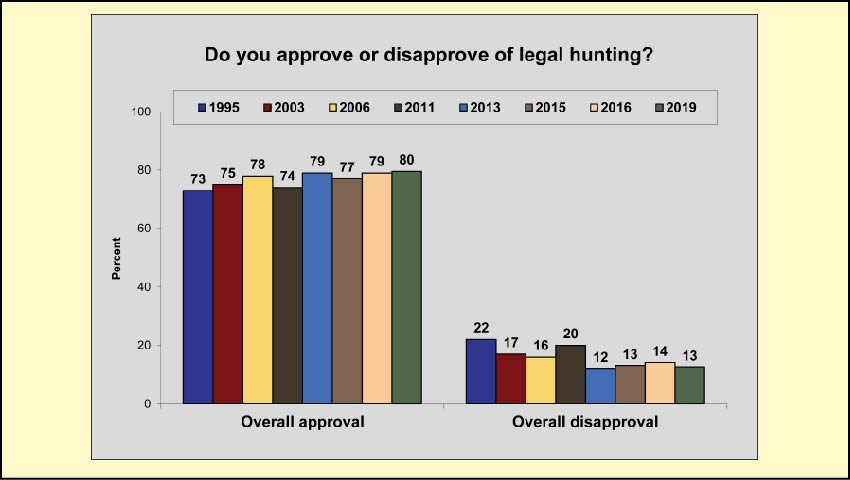 The American public, even if non-hunting, still favors hunting by a wide margin. The trick is to nurture that positive opinion and build upon it going forward.

The study with the NSSF entailed a probability-based scientific telephone survey of adult Americans, ages 18 and older. The sample included landline and wireless phone numbers, called in their proper state and regional proportions. RM obtained 3,014 completed interviews, with a sampling error that is at most plus or minus 1.76 percentage points. The results are reported at a 95 percent confidence interval.

In the survey for this study, the four activities are referred to as follows: legal hunting, legal recreational fishing, legal recreational shooting, and regulated trapping. The qualifying terms before each activity serve to exclude any illegal or improper variations of the activity, as might be the case, for example, if a respondent were to interpret the single term "hunting" as being inclusive of poaching.

Overall, 80 percent of Americans approve of legal hunting. Approval of hunting is highest in the Midwest (at 86 percent) and is lowest in the Northeast (72 percent). Americans' level of hunting approval has remained generally consistent over the past quarter-century, with a gradual increase in approval since 1995 when approval was at 73 percent. 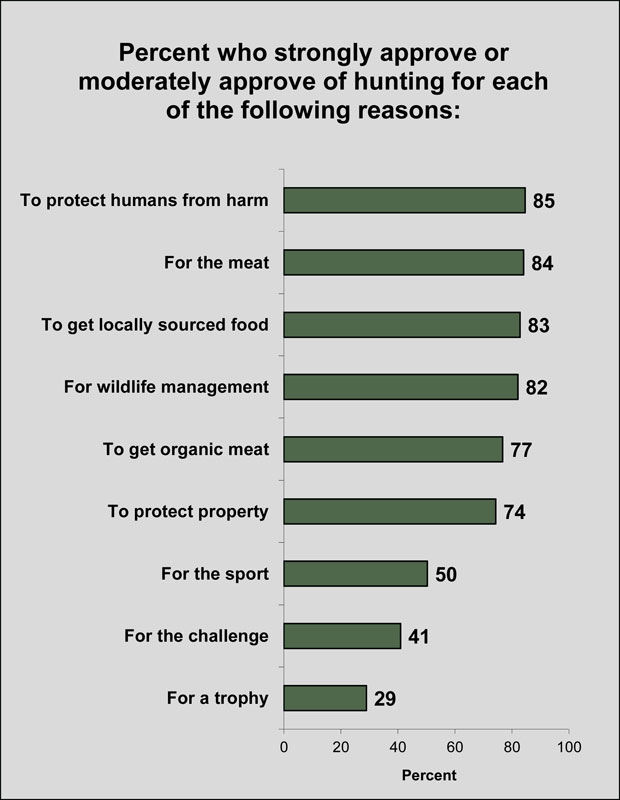 The American public's opinion of hunting varies by species, method and intention. It is pivotal to understand what messaging resonates with non-hunters in order to maintain and even grow a populous that continues to support hunting.

However, in step with the NRA research, approval of hunting varies considerably depending on the stated reason for hunting. When the reasons are utilitarian in nature—for meat, to protect humans or property, for wildlife management—approval is very high, but hunting drops substantially when the reason is for the sport or for the challenge. Meanwhile, less than a third of Americans approve of hunting for a “trophy.” Nonetheless, approval of these less popular hunting motivations has rebounded following rather sharp declines in 2016. (Note that the administration of the 2016 survey followed several high-profile news stories that depicted trophy hunting in a negative light).

Also mirroring the NRA research, the study showed that the species being hunted also affects the public’s hunting approval. Hunting ungulates and waterfowl is more accepted than hunting predator species, while the hunting of African lions and elephants has even less approval among Americans. Similarly, approval of hunting depends on the technique being used, especially the extent to which the technique in question allows for fair chase, meaning whether the animal has a reasonable chance to evade the hunter. For example, more Americans approve of hunting with archery equipment than approve of hunting with high-tech gear or hunting on property that has a high fence around it.

The survey findings suggest that fishing is less controversial than hunting: 93 percent of Americans approve of legal recreational fishing (compared to 80 percent who approve of legal hunting). Like hunting, however, approval of fishing depends on the motivation: More Americans approve of fishing for food than fishing for the sport, for the challenge or for a trophy fish. Meanwhile, most methods of fishing have high approval, with the exceptions of gigging and snagging.

The survey also examined attitudes toward shooting, finding that 81 percent of Americans approve of legal recreational shooting. This finding is consistent with the approval rates for shooting found in previous survey years, with the exception of a slight dip in approval in 2011.

Trapping is more controversial than the other outdoor recreational activities explored in this study. Public opinion on regulated trapping is split: 52% of Americans approve while 31% disapprove. Again, attitudes appear to be influenced by the stated motivation for the activity: There is relatively high approval of trapping for wildlife restoration, population control, food and property protection, but less approval of trapping for money, fur clothing and recreation.

MARK DAMIAN DUDA
Mark Damian Duda is the founder and executive director of Responsive Management, having led the firm since its inception in 1990. He holds a master’s degree with an emphasis on natural resource policy and planning from Yale University. Mark has conducted more than 1,000 studies on how people relate to the outdoors. He is the author of four books on wildlife and outdoor recreation, including “The Sportsman’s Voice: Hunting and Fishing in America and Watching Wildlife.” Mark is a certified wildlife biologist whose research has been upheld in U.S. district courts, used in peer-reviewed journals and presented at major natural resource and outdoor recreation conferences around the world. His work has been featured in many of the nation’s top media. For seven years, Mark served as a columnist for North American Hunter and North American Fisherman magazines.

Mark has been named Conservation Educator of the Year by the Florida Wildlife Federation and National Wildlife Federation, was a recipient of the Conservation Achievement Award from the Western Association of Fish and Wildlife Agencies and was named Wildlife Professional of the Year by the Virginia Wildlife Society. He also received the Conservation Achievement Award in Communications from Ducks Unlimited and an award from the Potomac Ducks Unlimited Chapter for his contributions as a researcher and writer. Mark was also honored as Qualitative Researcher of the Year by the National Shooting Sports Foundation and received the 2016 Distinguished Leadership Award from the National Rifle Association. Mark is an avid hunter, sport shooter, angler, boater and birdwatcher.