Life is all about decisions. Society sets most of the rules that we must follow. But in the hunting woods, marshes and fields, we're on our own. We alone determine our actions. We must follow the laws, of course, but otherwise we use our judgment based on knowledge, experience and plain woods savvy.

One of the more important decisions we make as hunters has to do with the quick and humane recovery of the quarry once it's struck by our projectile, whether it's a bullet, slug or arrow. Best case scenario is for the animal to fall as soon as it is hit, or close enough where we're able to see it go down. But what about the situation where it runs out of sight, leaving a decent blood trail, or no trail at all?

Do we take up the pursuit immediately or do we wait for a period of time? Conventional thinking is that the hunter indeed should wait after the shot, with some important exceptions. I've heard countless times that the hunter should wait an hour to make sure the quarry has died. Is there a correct answer that works every time?

Fact is, every scenario is different. It's a judgment call that we must make based on a number of factors, starting with whether the hunter made an ideal shot. Consider the reaction of the animal at the shot, the quantity and quality of the blood trail, impending darkness, woods crowded with other hunters, and others. Important to note, bowhunters adhere to different rules than rifle hunters. If the bowhunter made a good shot, today’s broadheads ensure the animal generally will die quickly. However, in cases where the shot was not perfect, such as when the arrow impacts the quarry a little too far behind the front shoulder, it’s almost mandatory to give it time to expire. That’s because an arrow causes extensive internal hemorrhaging which may require time to shut down vital organs. 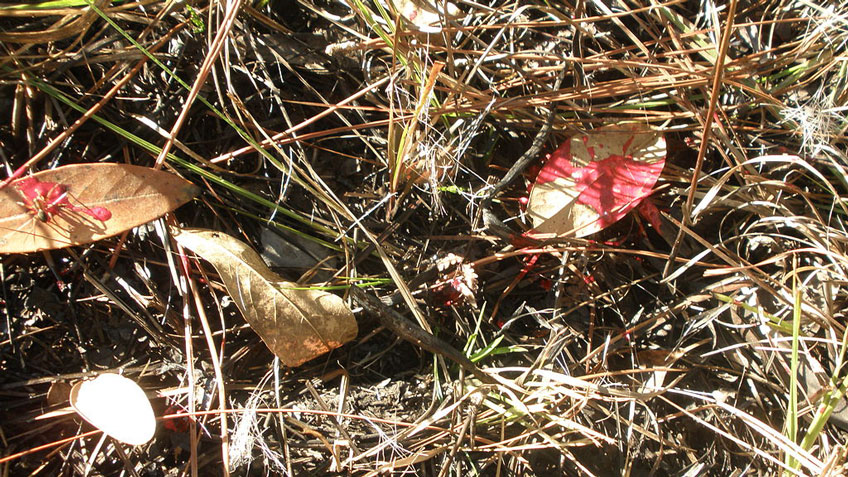 Try not to have your trailing party be too numerous or loud. One person quietly checking for blood while the hunter moves along scanning ahead for the animal, is all that is required. (Image by Josh Frier.)

After a lifetime of hunting, I've made decisions that worked, and some that did not. One of the most memorable was on a rifle hunt in the whitetail woods. I shot at a big buck when he was behind a fairly sparse bush. I’d intended to wait for him to clear the vegetation, but the butt of my rifle accidentally knocked over an empty juice can on the floor of my elevated box blind when I raised my gun. The buck heard it, jerked his head up and stared at me. I knew I was had, and I knew he'd bolt any second. He flinched at the shot, and bounded off into the forest. I found blood immediately, easily seen in the three inches of snow. I carefully investigated the spot where he stood, and saw where my bullet had clipped a branch. That was a bothersome discovery.

At that point I had to decide whether to follow immediately or wait. The blood was easy to follow in the snow, but it was inconsistent. There were several hours of light left, and I thought I might catch up to him and take a finishing shot. Tracks in the snow indicated that he bounded away for 50 yards or so, and then started walking.

The blood trail was light, but very vivid in the snow. As I followed, I noted that the deer continued walking at a fair pace. I pushed on, always looking ahead for sign of the buck. The pursuit was well into the third hour when I saw the deer ahead, lying down on his side. I had no idea if he had expired, so I put a finishing shot high in the neck just under his head. He never flinched and I knew he was dead.

As I approached, I looked for sign of the bullet wound. I found nothing and rolled him over. Still nothing. Then I made an astounding discovery. My bullet hit him in the knee joint, not squarely, but a grazing wound. I was certain that the bullet struck him there after being deflected by hitting the branch. I realized that by following him relentlessly, he didn't have a chance to bed down for any length of time. He literally ran out of blood from a wound that was superficial. Had I waited and he bedded, the injury likely would have coagulated and sealed itself. Then his track would have mixed with many others in the woods, or darkness would have taken over. 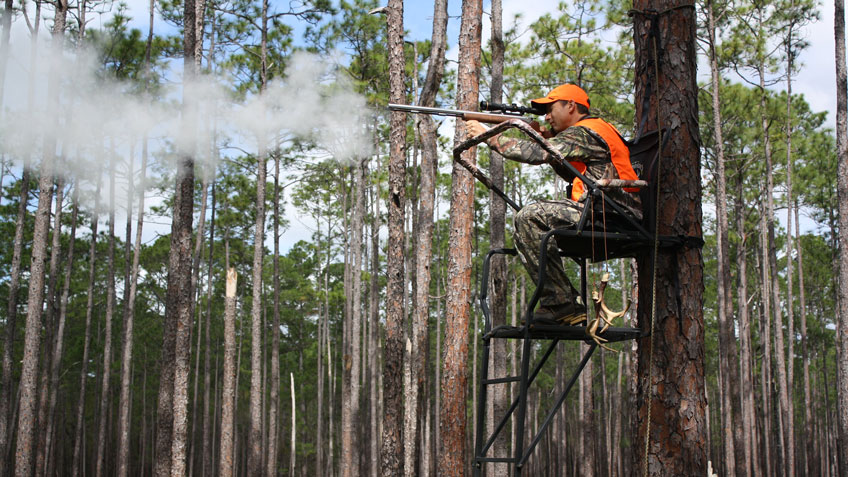 Each scenario is different, but if your shot is off its mark, you should wait a while prior to trailing. (Image by Tony Young, Florida Fish and Wildlife.)

I can recall many instances when following a blood trail, where a bedded animal was jumped by pursuers and never again left another drop of blood. That leaves you with only one option: searching blindly, hoping to stumble into more blood or locating the dead animal.

For years I hunted with two buddies who were medical doctors. One was a general practitioner, the other an orthopedic surgeon. They were both convinced that allowing an animal to bed typically allowed it to regain its strength and to stop bleeding—much of the time. On the other hand, they believed that a bedded animal with a significant wound to the vitals often would expire quietly where it lay. Nothing is predictable. Every scenario is different.

Whether you follow immediately or not, there are some cautions that are seldom adhered to when a game animal must be tracked. Most of the time, everyone in the hunting party will want to help follow the blood trail. It becomes a noisy group effort. You'll commonly hear Bill say, "Hey Joe, I've got blood here." Bill lopes ahead and everyone lurches forward. Then Harry finds the next blood and loudly announces his discovery. What you're doing is easily warning the quarry of your presence. Instead, keep the search party small. Ideally, one hunter should follow the trail while the one who hit the animal eases along and constantly looks ahead for the animal. The idea is to move slowly and as quietly as possible, attempting to spot the animal, whether it's walking or bedded. Be aware that it typically will be watching its backtrail. If you know the country, be aware that your companions could make a big circle and possibly ambush the animal far in the distance.

If it's getting dark, you might decide to abandon the trail until the morning. There are a few considerations here. Predators might find your animal and you'll find nothing but bones and a blood spot in the morning. I know a hunter who hit an antelope late in the afternoon. He opted to wait for daylight and found the carcass minus the meat. Coyotes had eaten it. In the country where I live in northwest Wyoming, grizzlies are apt to find your elk in the night. When you return in the morning, it isn't your elk any more, and you could be in big trouble with the angry bear. 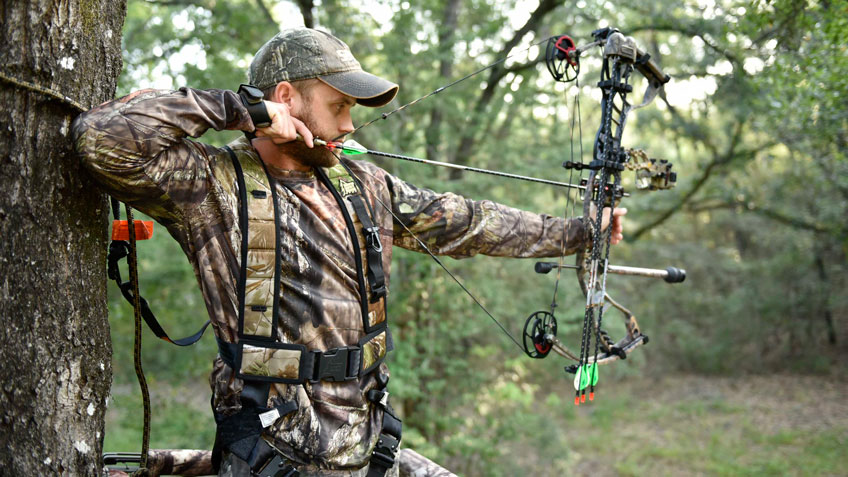 When bowhunting its recommended that you wait longer than when rifle or muzzleloading hunting prior to trailing a wounded animal. (Image by Tim Donovan, Florida Fish and Wildlife.)

Another reason: If you are hunting in warm weather conditions, it's likely that when you find the animal the next morning, it will be bloated and contaminated, unfit for human consumption. That's usually the rule rather than the exception. And, as an FYI, it's not difficult to follow blood with a searchlight or lantern, and there are products that help illuminate blood in the night.

Success in finding an animal sometimes can be a matter of luck—spotting that tiny blood spot on the yellow oak leaf, or walking left instead of right when following blindly. When it comes to hunter ethics, responsibility and respect for our renewable wildlife resources, you owe it to the animal to do everything in your power to locate it, abandoning the trail only when you've exhausted every option. And then, the next day, continue the search all over again. As the hunter-backed NRA—which launched America’s first hunter education course in conjunction with New York in 1949—is quick to note, that's the ethical and humane thing to do.  (Read the NRA Hunter’s Code of Ethics, including the need to do one’s best to acquire the marksmanship and hunting skills that ensure a clean, humane kill.)

About the author: Jim Zumbo is a noted Western big-game hunter, though he has hunted deer in all 50 states and also pursues turkey, upland game and waterfowl. With two degrees in forestry and wildlife, he has had more than 2,000 articles published in outdoor magazines, written 23 hunting books and conducted numerous hunting seminars nationwide, including for NRA Hunter Services. In addition to serving as a full-time writer/editor for Outdoor Life magazine for 30 years, most of them as hunting editor, he was host of the popular outdoor TV show “Jim Zumbo Outdoors.” A Benefactor member of the NRA, Zumbo has won numerous awards for his writing and remains active with conservation groups, including serving three terms on the Rocky Mountain Elk Foundation’s board of directors. His biography, “Zumbo, Based on the True Story of Jim Zumbo and His Blog Heard Around the World,” by K.J. Houtman was released in November 2016.