Just the Facts on Wolves and Coyotes

A Pew Research Center survey reports 68 percent of U.S. adults believe fake news is a more serious problem than sexism, racism, illegal immigration or terrorism. A recent example of misleading reporting is a June 3, 2019, Washington Post article titled, “The relentless slaughter of wolves paved the way for a predator that refuses to die.”

Wolf management is the headline, but actually, the article is more about coyotes. Retired U.S. Fish and Wildlife Service (USFWS) wildlife biologist, special agent and refuge manager Jim Beers says about the Washington Post article: “To conflate the [lawful and beneficial] extirpation of wolves in the 1800s and the eastward expansion and western control of coyotes in the mid to late 1900s is both unjustified and an urban wildlife fantasy designed to feed the imaginings of current animal rights and environmental extremism.”

The author is right. Prior to wolf eradication, coyotes were almost entirely found west of the Mississippi, and today they are found nationwide, including in some large cities. And now wolves are coming back. No one is sure how many wolves were here originally, but they were common and found coast to coast before the government launched an eradication campaign resulting in small populations in the upper Midwest and the northern Rockies, and even smaller populations of red wolves in the Southeast and Mexican wolves in New Mexico and Arizona.

In 1970, Present Richard M. Nixon ordered that no more poisons be used on public lands. With the absence of wolves, and no poisons, coyotes spread across the country. As reported on this website, today estimates of the total coyote population range from one million to 10 million, even though half a million coyotes are killed every year to try and manage their populations. 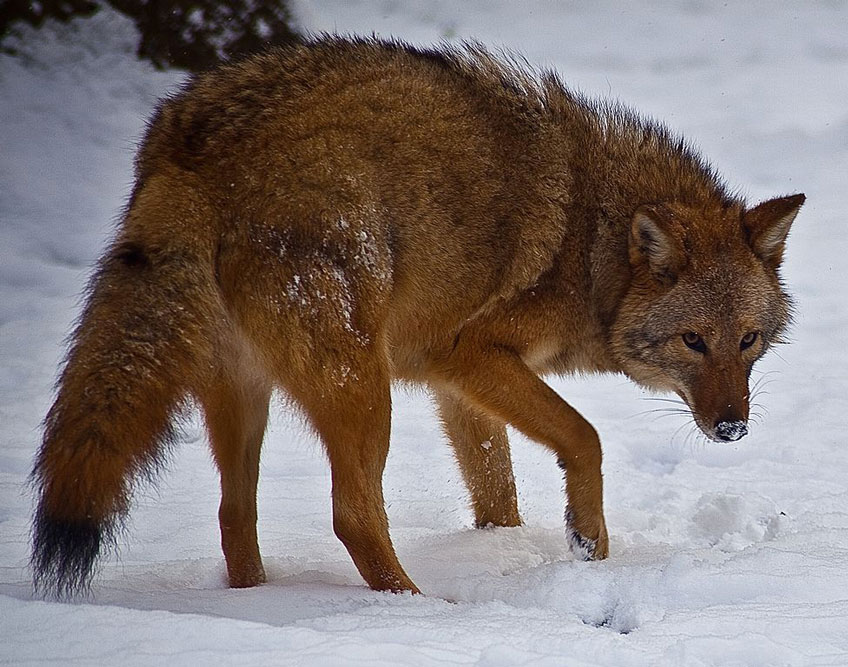 A coyote-wolf hybrid slinks along in West Virginia, near the Virginia state line. (Image by www.ForestWander.com.)

In 1995, 29 gray wolves from Alberta, Canada, were transplanted to Yellowstone National Park. The following year, 37 more Canadian wolves were brought into the central Idaho wilderness. The deal was that when there were at least 300 wolves and three consecutive years of at least 30 breeding pairs across the recovery areas, the states would take over management of wolves from the federal government. That has not been the case.

The new Canadian subspecies of gray wolves is larger, some growing to almost 150 pounds.

The transplanted gray wolves found the northern Rockies filled with wild food and their population exploded. The wolf population in the Lower 48 states is now at least 6,400 and growing at about 30 percent each year. Subpopulations of red wolves and Mexican wolves exist, but not many.

While gray wolves all but disappeared from the Lower 48 for a while, there has never been a shortage of wolves in North America. There are more than 60,000 wolves in Canada and 10,000 in Alaska, even though Alaska harvests more than 1,000 wolves a year. 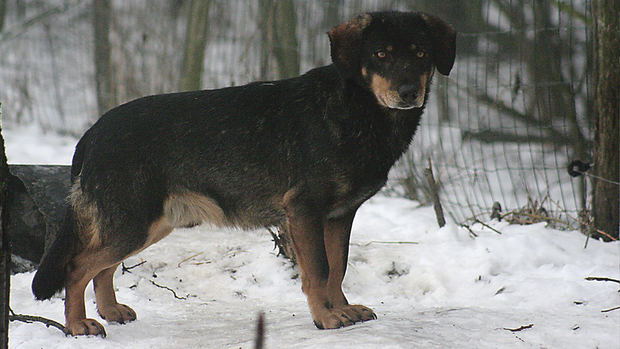 This wolf-dog hybrid from Wildlife Park Kadzidlowo in Poland is from a female wolf by a male Polish Spaniel. (Image by A. Krzywinski.) 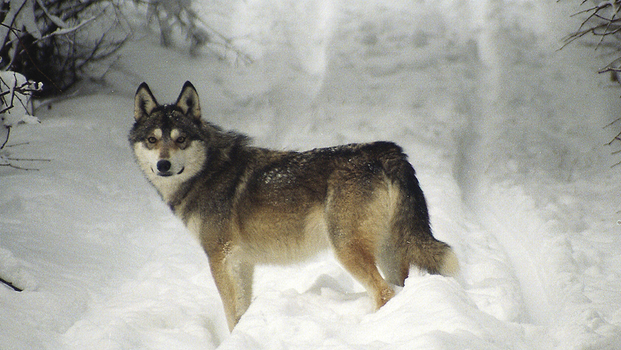 This second example of a wolf-dog hybrid from Wildlife Park Kadzidlowo in Poland is from a female wolf by a West Siberian Laika. (Image by A. Krzywinski.)

Today most buffalo are on private lands and wolves have seriously reduced native deer, elk and moose populations. So wolves are spreading into new areas, turning their attention to livestock, and they’ve lost a lot of their fear of humans. In 2010 alone, the U.S. Department of Agriculture (USDA) reported that wolves killed 8,000 cattle in the Lower 48.

The diet of coy-wolf-dogs is broader—garbage, fruit, rodents, squirrels, rabbits, fish and frogs, but when possible their diet is still 90 percent meat, which includes livestock as well as dogs, cats and road kills. Coyotes can cause damage to livestock, poultry, crops and pets and are a threat to public health and safety when they frequent airport runways and residential areas, while also sometimes carrying rabies and other diseases. 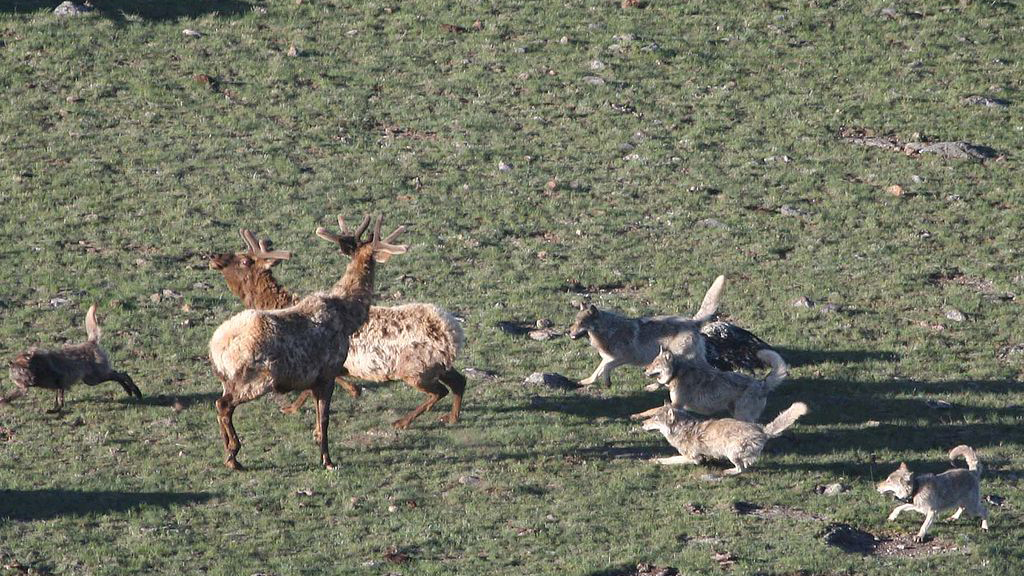 The Washington Post article says wild canines attack few people. The reality is that coyote attacks on people are increasing. Please click here to Read the article I wrote addressing this topic for NRAHLF.org.

Human deaths from coyote attacks are rare, but there have been two in recent memory. One was a young child in California and one was in Nova Scotia, Canada, when a woman was attacked and killed by two wolf-coyote hybrids.

Wolves also attack people. The most recent attack I learned of was on Feb. 7 in Red Lake, Ontario, when a woman walking her dog was attacked by a black wolf.

Wolves, coyotes and hybrid canines are a complex issue. Perhaps the best resource is "The Real Wolf" by Ted B. Lyon Jr. and Will Graves. Lyon is a former Texas state senator and currently a litigation attorney, who played a key role in working to delist wolves in the northern Rocky Mountain states. 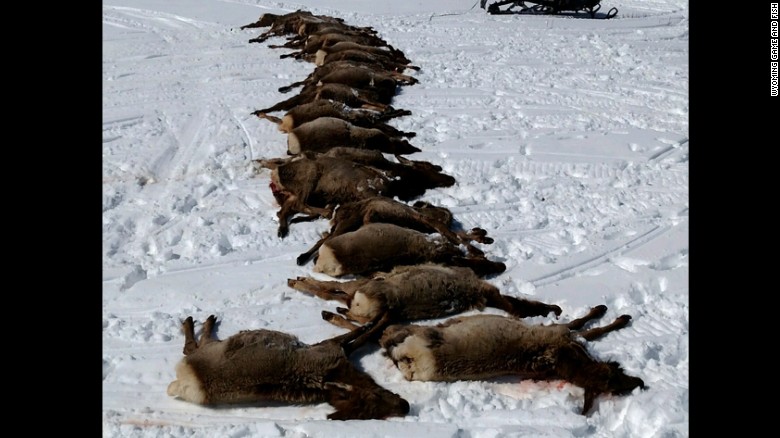 In reviewing U.S. wolf management, Lyon says, “The issue of how wolves could be controlled is not science at all, it’s pure unadulterated politics.” He adds, “The Federal government and the states have spent over $200,000,000 on wolf introduction in the West and another $26,000,000 in New Mexico and Arizona to reintroduce Mexican Wolves.”

"The Real Wolf" co-author Will Graves, former Chief of the Livestock Inspecting and Vaccinating Brigade of the USDA’s Bureau of Animal Industry, first became aware of coyotes and wolves when the wild canines were discovered to be carriers of foot and mouth disease.

Dr. Valerius Geist, environmental science professor emeritus at the University of Calgary, finds that wolves also become increasingly aggressive around people unless one shoots to kill, drives them away or traps them. Geist predicts that soon there won’t be any purebred wolves or coyotes in the Lower 48. He suggests creating large fenced areas in the wilds of Canada and Alaska: one for pure wolves and another for pure coyotes so each species can be protected from feral dogs and hybridization. 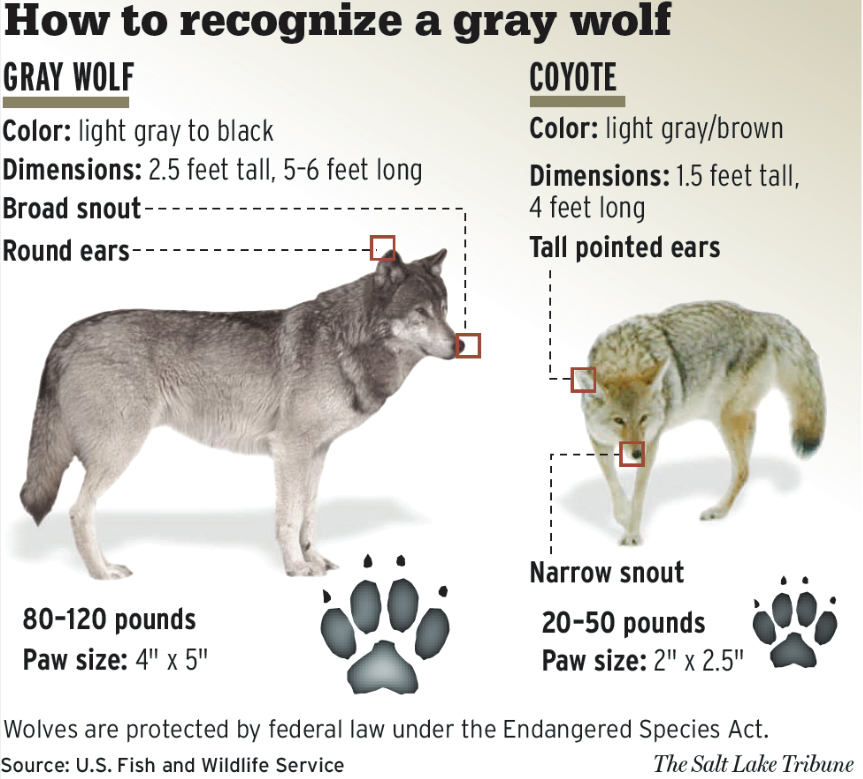 In regard to the Washington Post article, Dr. Geist says: “The author of the piece in question is not very able to distinguish between scholarship and advocacy. I bear this writer no ill will, but what he has written is in my eyes fake news.”

Kip Adams, a Quality Deer Management Association biologist, says, “You have to remove about 75 percent of a coyote population annually to cause it to decline.” Hunting alone is not an effective method of reducing populations. Eric Gese of the USDA’s Wildlife Services Research Center says that trapping is also necessary.

The Washington Post article also says that the wolves and coyotes situation is akin to the recent United Nations biodiversity report predicting mass extinctions. This report is challenged by conservationist Stewart Brand, who says, “The idea that we are edging up to a mass extinction is not just wrong—it’s a recipe for panic and paralysis.”

Perhaps the best wild canine advice comes from the first professor of wildlife management, Aldo Leopold, who said, “No one seriously advocates more than a small sprinkling of wolves. When they reach a certain level they will certainly have to be held down to it. ... In thickly settled counties, we cannot have wolves, but in parts of the North we can and should.”

About the Author:
James A. Swan, Ph.D. is co-executive producer of the “Wild Justice” series on the National Geographic Channel and chief executive officer of Snow Goose Productions, LLC. His 2008 documentary “Endangered Species: CA Fish and Game Wardens,” is the inspiration for the “Wild Justice” series. A recent project is as a co-writer for “Falconer: The Sport of Kings,” winner of Best Film and Script at Skyfest Festival. His book, “War in the Woods,” co-written with Lt. John Nores, (Lyons 2010), has been optioned for a scripted dramatic TV show, “Lone Pine,” that’s currently in development. He’s the author of 10 nonfiction books on human aspects of environmental conservation, including three about the psychological aspects of hunting, that have sold over 250,000 copies and over 800 articles and his columns have appeared in a wide variety of publications including NRAHLF.org and American Hunter. James also has appeared as an actor in 20 feature films, three dramatic TV series and 30 industrials, commercials and print ads. To learn more about James visit his website.