The folks in charge of hunter education in Connecticut had a dream. The National Rifle Association (NRA) Hunter Services had the tools to make it a reality. Together they built a pilot program that serves as a model for any state wildlife agency, hunting club or other group wishing to offer hunters in-depth and locally tailored advanced hunting clinics.

Tom Donlon is the coordinator of the Conservation Education and Firearms Safety Program within the Wildlife Division of the Bureau of Natural Resources, which in turn falls under the Connecticut Department of Energy and Environmental Protection. The maze of governmental layers are forgettable, but Donlon’s efforts on behalf of Connecticut hunters are not. For example, the venison processing workshop he put together is so popular, registration exceeds capacity every time it’s offered.

It took numerous iterations before Donlon felt that seminar reached its zenith. In the case of the upcoming Whitetail Deer Hunting Clinics, the tinkering has been eliminated because Donlon first brought his needs to Peter Churchbourne, the former national manager of NRA Hunter Services. Later, when Churchbourne became director of fundraising for the NRA Hunters’ Leadership Forum, Matt Fleming was brought in as the current national manager of NRA Hunter Services. 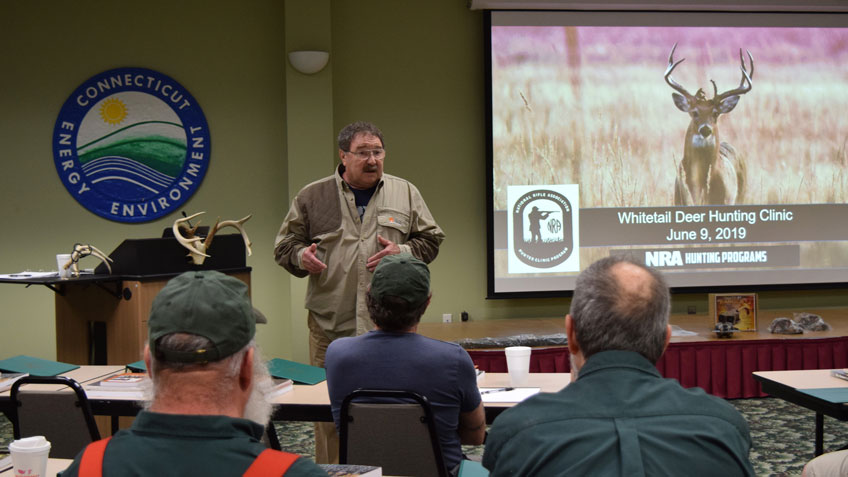 The NRA Hunter Clinic Instructor Program certifies hunters to teach topic-specific clinics to the public. Participants receive a home study kit in one of three hunting concentrations: whitetail deer, wild turkey or Western big game. Each course, currently offered at $28, provides a curriculum, an instructor’s manual, a copy of the NRA publication “The Hunter’s Guide” and whichever volume of the NRA Hunter Skills Series applies to their hunting concentration. An exam is also included, which is mailed into the NRA Hunter Services Department, and only those earning a grade of 90 percent or higher receive certification. Firsthand experience and expertise in whitetail deer, turkey or Western big game hunting is only part of the success equation. You must also be able to teach. And through this program, the NRA has certified a small cadre of instructors, approximately 385, to go forth and conduct advanced hunting clinics that not only guide new hunters step by step but that give seasoned hunters that “one new thing” they learn that makes attending a seminar worthwhile.

Let’s say a military base plans to open land that hasn’t been hunted in years to wild turkey hunting, but they want hunters to be trained. They could put one of their staff members through the NRA Hunter Clinic Instructor Program then offer the Wild Turkey Hunting Clinic to those intending to hunt the opening. In this case, though, NRA Hunter Services collaborated with state wildlife agency leaders, as they did previously in Delaware, to train a group of instructors.

NRA Hunters Services arranged for Tom Hindman to travel from his home in Pennsylvania to Connecticut to teach a committed group of 37 instructors on how to conduct a Whitetail Deer Hunting Clinic. Hindman has hunted for over 60 years and taught at the high-school level for 10. In 2010, in recognition of his relentless efforts to pass down his hunting knowledge, he became the premiere recipient of the Hunter Clinic Instructor Program Award, presented by the NRA. 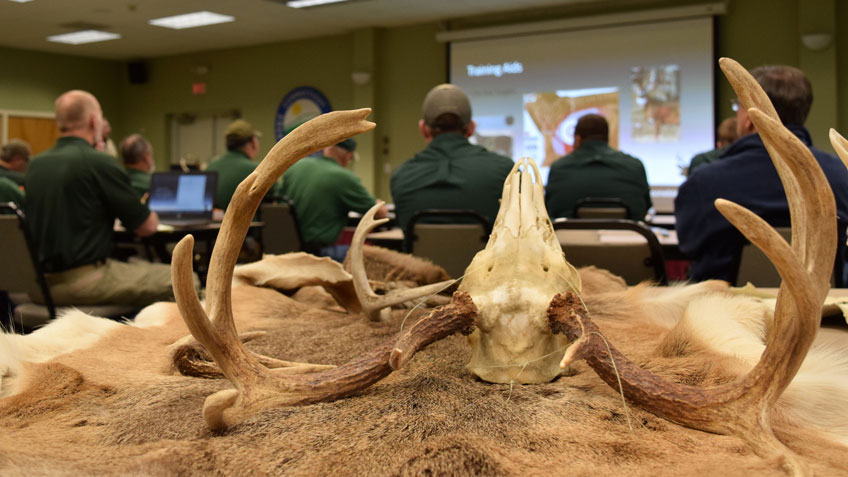 Numerous displays were on hand during the class so instructors could get ideas for visual materials for their own clinics. (Image by Connecticut's Conservation Education and Firearms Safety Program staff.)

Hindman first introduced the Nutmeg Staters to the whitetail curriculum, explained how comprehensive it was and how easy it was to use. He covered how to assess a class and tailor the teaching approach accordingly. He stressed how much preparation matters and how lesson plans could aid the instructors. “The NRA is determined that we not read to a group and put them to sleep,” Hindman explained, and he shared his firsthand experiences in how to make a clinic engaging and informative. He stressed that hunting instructors are ambassadors for our sport and that we must set the example, keeping our cool in the face of anti-hunting disruptors and always conducting ourselves so that the media and the public can only portray us as ladies and gentlemen.

Hindman said that one of the most intriguing situations he has faced is instructing a non-hunting father whose daughter wants to learn to hunt. The first thing he does is congratulate such fathers on being man enough to know what they don’t know. He tells them how honored he feels that they chose his clinic. He offers to take them hunting so he can provide that one-on-one support the father needs to confidently share hunting with his daughter. “Of course, safety and ethics are paramount,” Hindman reiterated, but he also stressed that if you have a genuine personal rapport with your students, you can open up a way of learning that expands every season. Some hunters learned to hunt one year and then do the same thing over and over for 20 years, but hunting can be so much more. The always-something-to-learn mentality is what an instructor wants to kindle in their students.

After six or seven hours, when Hindman wrapped up his hunting and educating portions of the training, Donlon and his corps group of newly minted instructors sat around and brainstormed about what needed to be added to make their clinics Connecticut-specific. “I call what the NRA did for us the 80-percent solution,” he said. It was now up to them to build on the NRA foundation with state-specific material and goals. Also, by allowing the instructors to contribute to how the clinics would be delivered, they became personally invested and had ownership in the clinics’ success. They proved to be exuberant and 100-percent committed to both the solid hunting and educational foundation the NRA provided—without which they would have spent years recreating the wheel—as well as to meeting numerous goals the agency wanted to achieve. 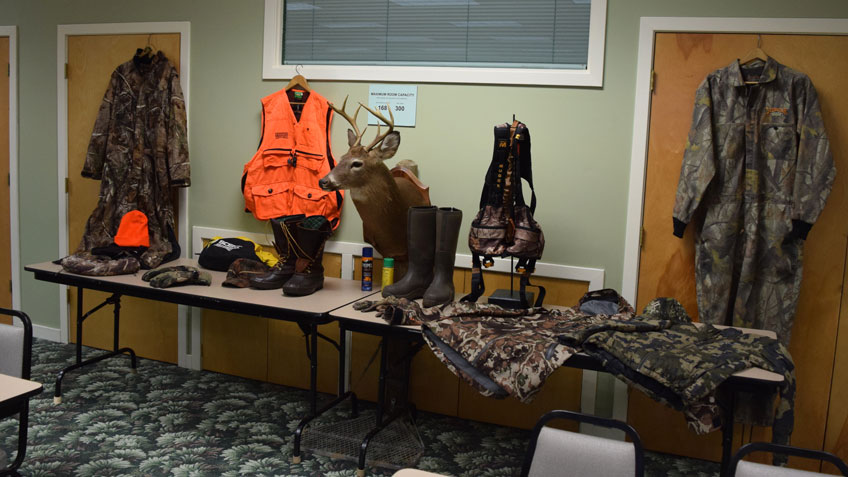 In addition to a display of various hunting rifles, stations were set up around the classroom displaying gear, clothing and accessories. (Image by Connecticut's Conservation Education and Firearms Safety Program staff.)

Clinics in each state can review hunting regulations for the species being covered, as well as local terrain considerations. Connecticut offers a deer lottery, so that would be something to include. The two top things on Donlon’s list, however, was e-scouting and treestand safety. The e-scouting plan is to show first-timers where to find topographical maps and imagery to start their scouting. This close guidance would raise the odds of a new hunter finding deer, which would, in turn, allow for a higher chance of taking a deer. Success early on will contribute to a budding hunter's desire to continue with the sport.

Donlon wanted the second topic worked into the clinics as a hands-on practice session. Connecticut enjoys a significantly lower treestand accident rate than the rest of the country. They have had one accident per season for the last six years. “But any treestand accident is completely avoidable and needs to be eradicated,” Donlon said. And he knows full well that not every fall is reported and that hospitals are not required to report treestand accidents. It is only through other hunters that he or his staff may or may not get word of an injury. Sometimes it’s as simple as not reading the directions correctly or not reading them at all. So, every participant will be given hands-on instruction in using a variety of treestand riggings, in addition to how to position their stands to take into account all the hunting material they absorbed through the NRA’s curriculum, such as wind, deer runs or feeding areas.

To augment the science included in the NRA curriculum, Donlon is bringing in a state biologist to discuss behavior and habitat. Donlon reiterates that without the NRA coming in, supplying such a sound curriculum and training to his instructors, this would have taken years to get off the ground. The first Whitetail Deer Hunting Clininc will be held in the fall with three additional ones scheduled for 2020. Be sure to register as soon as the announcement goes out.