As a wildlife conservation activist in New Jersey, on July 8 I was invited along with dozens of other hunting, fishing and conservationist leaders across the nation to the White House’s East Room to hear remarks by President Donald J. Trump, several cabinet secretaries and others on environmental leadership and innovation in the United States. It was an unforgettable experience. Among the topics discussed were timber and responsible forest management, oceanic debris and clean water initiatives and, most excitingly for this website, public-land hunting access issues and the North American Model of Wildlife Conservation.

In President Trump’s opening remarks he iterated a mission for his administration to be good stewards of public lands and emphasized a commitment to melding pro-energy, pro-job and pro-conservation policies.

The first guest speaker, Bruce Hroback of Billy Bones Bait ‘N Tackle in Port Saint Lucie, Fla., was a refreshing addition to the lineup of “experts” because ultimately sportsmen—and the small mom-and-pop tackle shops, gun stores and sporting goods operations we support—are the backbone not just of our communities but of the environmental conservation movement as a whole.

Later in his speech, President Trump touted a massive public lands package he signed saying, “This year, I signed the largest public lands package in a decade, designating 1.3 million acres—that’s a lot of land—of new wilderness and expanding recreational access.” He later added, “And all across the nation, our policies are ensuring that extreme agendas do not stand in the way of responsible use of public lands. We’re getting Washington bureaucrats off of their backs, and we want to make sure that they go out and help our hunters, and our fishers, and farmers, and everyone. And they want to do it. …”

The President noted that in the proud tradition of conservation inherited from U.S. President Teddy Roosevelt, “We will preserve this land for our magnificent people.  That’s what we’re doing; we’re preserving our land. We’re making our land better and cleaner and safer.” 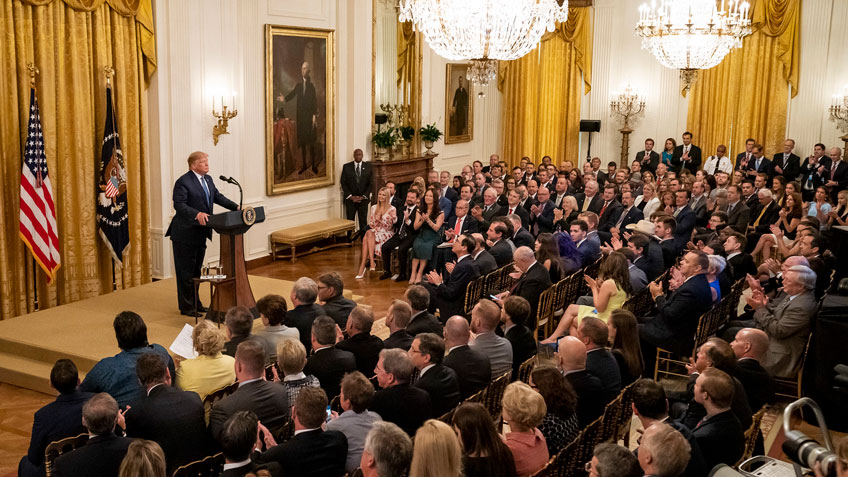 President Donald J. Trump is applauded as he delivers remarks on America’s environmental leadership July 8, 2019, in the East Room of the White House. (Official White House Photo by Tia Dufour)

Next up, Department of The Interior (DOI) Secretary David Bernhardt shared his remarks, emphasizing the DOI’s plan to open and expand hunting and sporting access to millions of acres of public land, wildlife refuges and fish hatcheries—something this website covered in depth back in early June. Bernhardt said, “We are aggressively implementing this act, which, among other things, designated 1.3 million acres of public land as wilderness.” To put that in perspective, Bernhardt explained that 1.3 million acres exceeds the entire size of the state of Rhode Island. Bernhardt added, “Mr. President, throughout your term, Interior has also been focused on strengthening the North American Wildlife Conservation Model, which is the best in the world. The model was originally conceived by American hunters and anglers, who were the first to crusade for wildlife protection, and retain some of today’s most important conservation leadership.”

Secretary Bernhardt spent time talking about the relationship between federal conservation agencies like the DOI and its Fish and Wildlife Service, state agencies, and stakeholders. He also explained how these policies remove the barriers to collaboration between all parties to bring the conservation community closer together.

“Public access and outdoor recreation opportunities are critical for wildlife conservation,” Bernhardt said. “Since January of 2017, across the refuge system, we have devoted more than $52 million to restore, retain and enhance access to outdoor recreation sites and support habitat infrastructure. During that time, we’ve also opened or expanded hunting and fishing access to 385,000 of acres on refuged lands.”

Reminding the crowd of the DOI’s most recent moves, Bernhardt noted, “And last month, we announced our plan to open or expand an additional 1.4 million acres in several national wildlife refuges and fish hatcheries for new hunting, fishing, and recreational activities. America leads—it’s a big number,” a comment met with resounding applause.

In his closing remarks, President Trump summed up the event by saying, “We have only one America. We have only one planet. That’s why, every day of my presidency, we will fight for a cleaner environment and a better quality of life for every one of our great citizens. Above all, we will remain loyal to the American people and be faithful stewards of God’s glorious creation, from sea to shining sea.”