Understanding Hounds, Hunters and the HSUS

There’s a place I know in west-central Idaho. It’s not far from the Frank Church Wilderness. The Sawtooth Wilderness is right around the corner, too. In this place there’s a River and a Mountain. Here there are bears. Black bears, chocolate bears, cinnamon bears, blonde bears—more colors than a kaleidoscope it seems. And, of course, there are hunters and hounds and handlers, too.

There are sunsets, and sunrises, and friends, and colleagues. There are the smells of bear fat—the gold-standard for chefs in the know—rendering in the kitchen. There are early morning risings, late-night slogs through moody forests, and trailing bears in the rain. There are new friends and old friends. And there is laughter. It’s the kind of laughter that only comes in places like this. If you’ve been there, you know the feeling. It’s hunting camp.

But you may not know the feeling of trailing bears with bear hounds. In some circles the technique is controversial. I even know other life-long hunters who condemn the practice as unsporting. They say it defies the fair-chase standard. They’re wrong. And they’re wrong on several levels.

First, until you’ve done it—until you have followed a pack of baying hounds though thick and thin, up mountains and down valleys, through miles of muck and brambles—you don’t have the necessary perspective to make a call on what is sporting or not. Even if you don’t wish to kill a bear behind hounds, tag along just once to see how tough the hunt can be. Never mind the incredible tenacity of the dogs, bred for generations for this alone; just try to keep up.

Secondly, when you condemn any form of hunting that you don’t personally participate in, you play directly into the hands of the deep-pocketed anti-hunting groups that wish to end all hunting. Groups like the radical Humane Society of the United States (HSUS) have a publicly stated goal of ending all forms of hunting. They don’t understand, and don’t care, that this isn’t a sport to us; it’s a culture. It’s as much a part of our lives as breathing.

It’s not just the other guy’s problem, you see. Just because you don’t hunt bears with hounds, for example, doesn’t mean HSUS and their ilk won’t come after your favorite lifestyle choice. 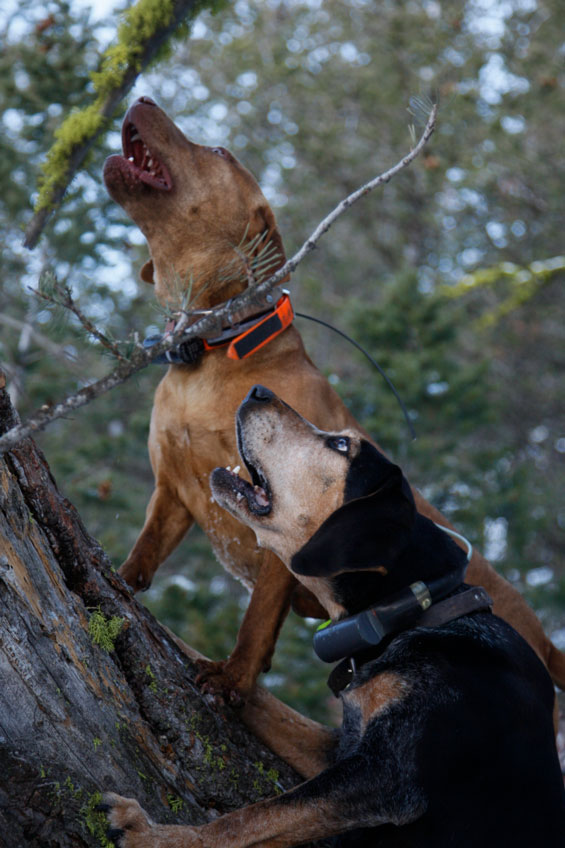 It doesn't matter if you don't hunt bear or mountain lion with dogs, or if you don't hunt waterfowl with dogs. If you hunt, period, you need to support your fellow hunters, because the endgame for animal rights extremists is to ban hunting of all species by any method. (Windigo Images)

Do you have a Labrador retriever, or a pointer, or a setter? Have a friend who does? Like to hunt pheasants? Ducks? Maybe quail on occasion? Does the thought of beagles running rabbits evoke some kind of emotion? Do coonhounds baying in the night appeal to you… at all? I’ve never done that, myself, but, man, it sounds incredible.

How about hunting mountain lions with hounds? That’s really the only way to effectively manage the big cats, but it’s already been outlawed by ignorant politicians bending to the will of the anti-hunters in California, Oregon and Washington. The same thing is coming to a woodlot or marsh or cornfield near you. If it’s not cats, or bears, soon it will be something you really love. Your only choice is to stop it yourself… or do nothing and lose.

The Humane Society of the U.S. the equally absurdly named Natural Resources Defense Council, the radically litigious Wild Earth Guardians, and a host of other groups which prey on naïve and wealthy urbanite donors, won’t stop until you and your friends have to give up your bird dogs, your coon hounds, your rabbit dogs, too. They want an end to all hunting. Period. Don’t believe me? Read this, as covered by HumaneWatch.org:

“If we could shut down all sport hunting in a moment, we would.”— Former HSUS CEO Wayne Pacelle

As evidenced from information on its own website, the organization doesn't even want you to use horses to pack out your elk:

“The HSUS also opposes the use of horses in fox hunting and other riding activities that involve the chasing or killing of wild animals.”

They want to ban all rodeos and horse racing, too, but that’s outside our discussion here.

Back to bear hounds. Part of the premise HSUS, et al., use to sway naïve judges in their favor is to claim that black bear hunters using hounds (or bait) to hunt the bruins, are not only unethical, they also have a high likelihood of accidentally killing grizzly. They’ll point to a few isolated cases where grizzlies were mistaken for black bears, but they will ignore the obvious fact that a treed bear, or one lingering around a bait, gives the hunter time to make up his or her mind about whether that bear is a suitable, or even legal, animal.

I witnessed this exact situation several times on a recent hound hunt when sows with cubs were treed. The moment the cubs were spotted the dogs were called off and we went looking elsewhere. That’s how it works with hounds. There was no possibility of error. Try to explain that to a HSUS zealot and you’ll get a blank stare. With no understanding of hunting or of hunters, they always assume the worst.

There’s an old adage, courtesy of my favorite Founding Father, which says “We must, indeed, all hang together or, most assuredly, we shall all hang separately.” Thank you Mr. Franklin! Those are particularly sage words for all hunters in today’s world.

About the Author: Keith R. Crowley is an award-winning writer and photographer and the author of three books on the outdoors: “Gordon MacQuarrie: The Story of an Old Duck Hunter,” (2003), “Wildlife in the Badlands,” (2015) and the newly released “Pheasant Dogs.” When he is not traveling in search of new stories and new images, you can find him at his home on a lake in northwest Wisconsin with his wife, Annette, and a collection of old dogs and old boats.