When the Hunter Is the Hunted

It’s your hunt of a lifetime… the one you have dreamed about your whole life and saved up to go on for years. You finally booked your hunt after exhausting research for just the right location and guide, or the right information for a successful do-it-yourself hunt. You realize this might be your only chance at this dream hunt, so you want everything to go just right.

The day comes and you experience excitement like you have never experienced. There it is! The largest elk (moose, caribou, mule deer) with the biggest set of antlers you have ever seen. Within a span of 30 seconds, though a lifetime in “scope years,” you line up the crosshairs perfectly for a heart or lung shot and with the skill of a trained marksman, you squeeze the trigger. As the bullet hits its intended target, your trophy instantly falls where it was standing.

You approach your bull in awe. With great care, you or you and your guide proceed to cape out your trophy and get the meat off the mountain, paying close attention to the job at hand. You tune out everything else around you as you relive the excitement in your head over and over while being extra careful with the skinning process.

Fatal mistake! Within a couple of minutes, you or someone else is dead. A grizzly bear or several bears have just charged into your makeshift processing facility and turned it into a horror show.

A grizzly bear or several bears have just charged into your makeshift processing facility and turned it into a horror show.Go ahead, keep telling yourself, This could never happen to me because I’ve been hunting my whole life and have never seen a bear. Or, I know how to hunt around bears and never let my guard down. Or, This does not happen in real life, is only a scare tactic and only happens in the movies.

It did happen. Not only did it really happen, but it happened last hunting season in Wyoming. As covered by this website, on Sept. 14, 2018, professional hunting guide Mark Uptain, 37, was guiding a client from Florida on an elk hunt during bow season on Terrace Mountain, 44 miles from Jackson. Uptain lived and hunted around grizzly bears his whole life and was a professional guide for many years. He knew what he was doing when he took his client hunting in grizzly country.

Uptain and his client were field-dressing a bull elk when they were attacked by a grizzly bear sow. He was carrying bear spray and a Glock 10 mm at the time of the attack, and his client carried bear spray and a crossbow. Uptain, married and a father of five, was killed at the scene and his client escaped with injuries. One can of bear spray was deployed, and the Glock semi-auto malfunctioned due to human error, likely caused by stress.

Based on the Wyoming Game and Fish Department Investigation Report, had the Glock not malfunctioned and been readily accessible, the firearm might have deterred the attack and possibly might have saved Uptain’s life.

Know Your Handgun and Ammo Options When Entering Bear Country
Handguns can be divided into two categories: revolvers and semi-automatic pistols. Generally, each can be further divided into single-action and double-action. With a single-action, the hammer must be manually pulled back each time before the trigger is pulled to fire a round. With a double-action, when the trigger is pulled, it mechanically cocks the hammer back and lets it fall to fire a round.

According to state officials in Alaska and Wyoming, there are a few relatively powerful handgun chamberings that should be considered for protection against large predators, and typically these are cartridges chambered in revolvers. They include, but are not limited to, .44 Magnum, .454 Casull, 460 Smith & Wesson and 500 Smith & Wesson. These are powerful cartridges that penetrate deeply and have serious knockdown power for handguns, and when it comes to large predators, the idea is to stop the attack. Some experts contend the .44 Mag. and the .454 Casull are good choices because of their portability and pointability. The .44 Magnum is on the smaller end for defense against the area’s largest predator, the brown bear. Guns chambered for the 460 S&W and 500 S&W are typically large and heavy revolvers, making them somewhat unwieldy—the trade-off for additional energy. One could also consider a shotgun loaded with slugs or a shorter barreled, big-bore carbine for protection in big bear country. While semi-automatics are another other option—often limited by the power of their cartridges—double-action revolvers can be simpler to operate in less-than-ideal situations, such as if you find yourself in the unfortunate position of having a bear on top of you. 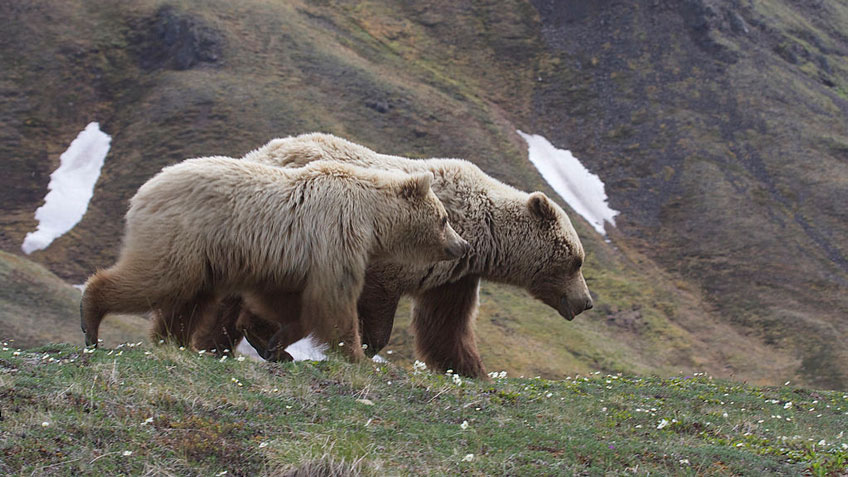 Never let your guard down in bear country. (Image by Gregory "Slobirdr" Smith)

Handgun ammunition also plays a role in the effectiveness. There are basically two types of self-defense ammunition applicable. The first is hollow-point or soft-nose. The second contains full-metal-jacket and solids, including hard-cast bullets. The first category of bullets is designed to enter the target, then expand to create maximum internal damage. The second category is designed for maximum penetration, piercing vital organs. The type of predators in the area that you might encounter dictates what type of ammunition you should carry.

As a general rule, soft-nose ammunition is the most effective in stopping threats that are less than 300 pounds and have thin skin and little-to-moderate fur, such as mountain lions. Bullets should be a minimum of 240 grains in weight, although 300 grains would be preferable.

State officials in brown bear country insist that solid ammunition is the best choice.State officials in brown bear country as mentioned above insist that solid ammunition is the best choice. Again, this ammunition gives the shooter the best penetration to reach the vital organs of the largest bears. When using solid ammunition, accuracy is crucial.  A poor shot could pass through a predator doing little damage, much less slowing it down. However, what each individual carries for protection is a very personal choice that should be based on what one is comfortable using. The calibers mentioned are good places to start as they are the ones suggested by specific state wildlife agency officials for protection against the largest brown bears.

The bottom line: When hunting in areas with large predators, prepare, be aware and always have options. You do not want your hunt of a lifetime to be the last hunt of your life.