Recent news reports of the U.S. Fish and Wildlife Services’ (USFWS) intention to remove the Key deer, a subspecies of whitetail deer, from Endangered Species Act (ESA) protections have been rife with histrionics from conservation extremists. Stories like the ones appearing in the Miami Herald point to everything from illegal feeding and human encroachment to screwworms, hurricanes and global warming as reasons not to delist the dog-sized Key deer. In truth, the Odocoileus virginianus clavium represents a resounding conservation success story—despite all the real and perceived challenges it faces. In accordance with the original intent of the ESA, none of those threats eclipse the fact that the Key deer has reached the carrying capacity of its habitat and that local authorities have proved themselves more than capable of managing the species in conjunction with federal assistance when needed.

Somewhere between 6,000 and 10,000 years ago, the last glacier retracted, increasing the sea level and separating the Florida Keys from the mainland. The Key deer became cut off from its mainland cousins, the whitetail deer. Contrary to myths that Key deer swam to the islands, scientists point to mitochondrial DNA evidence that disproves that theory. Key deer do not share specific genetic markers with mainland deer and vice versa, so much so that they are almost their own species. Nearly 10,000 years of hard natural selection would favor a smaller species that could more easily traverse the thick undergrowth of the Florida Keys.

Scientists Discuss the Past, Present and Future of Key Deer
Despite the creepy Carnival of the Animals musical accompaniment, this video pieces together interviews with Key deer scientists, covering the species’ origin, its decline and recovery, and the challenges it continues to face.

Key Deer Battle Back from Near Extinction
Natives, settlers and sailors all used Key deer as a source of food. In 1939 the hunting of Key deer was banned. Unfortunately, illegal poaching continued, as did habitat encroachment by human settlements. By 1955 population estimates topped out at 50 individuals. In 1967 the USFWS established the National Key Deer Refuge (NKDR) as part of the National Wildlife Refuge System. The refuge encompasses over 8,500 acres on Big Pine and No Name keys. Steadily, the Key deer made a comeback, reaching approximately 400 to 500 individuals in the 1970s and over 1,000 individuals today.

Although the NKDR is named for the Key deer, that is not the only species the refuge is charged with protecting. The Key deer have done so well that they’re negatively impacting other endangered or threatened species. For example, they’re eating plants that sustain marsh rabbits and swallowtail butterflies. Refuge managers must balance the needs of all its species.

The Key deer is taking advantage of supplemental feeding by humans, which is why scientists are seeing increased body weights and why extremists point to a possibly artificially inflated population that needs perpetual protection, contrary to the intent of the ESA. An increase in population leads to an increase in “gang” numbers, which increases the chance for mating, which further increases the herd, but also increases the chance to spread disease, sometimes with legitimately catastrophic results.

Never Feed the Key Deer
Key deer are cute and curious, making them a tourist must-see and a resident favorite. If people would view them from afar, problems could be mitigated, but alas people continue, despite the numerous road signs that prohibit stopping and educational outreach efforts, to feed the deer. Whether along the side of the road or in back yards, this human interaction—which scientists admit is part of the local culture—creates a positive experience for the Key deer, leaving them highly susceptible to being hit by cars, attacked by dogs or drawn to garbage. Supplemental feeding can itself literally kill a Key deer. Cracked corn, for instance, causes bloat, which in the wild is a death sentence, and nachos and tacos do not contain the nutritional balance a deer-friendly vegetation diet provides.

Car strikes are the leading cause of death for Key deer. Each year about 10 percent of the herd is hit by cars, accounting for approximately 70 percent of the species’ mortality rate. Scientists argue that interacting with humans along roads or in suburban or urban areas means that those Key deer aren’t even displaying wild behavior anymore. If supplemental feeding were to be curtailed, then reproduction would fall off and the population would level off to a steady, sustainable level. Alternatively, sterilization programs are cost-prohibitive and don’t guarantee results. In addition, indiscriminate means are used to select which deer won’t breed. Would a big, strong buck be the most likely to approach a human, and therefore would its sterilization damage the age-class structure as well as the gene pool?

If the mission is to conserve the Key deer as it is found in the wild, animal rights extremists will use the “artificially elevated population due to supplemental feeding” argument as grounds for lawsuits to keep the Key deer perpetually on the endangered list, when by multiple measures it has recovered and local agencies have proved adept at managing what is a top tourism draw for the area. 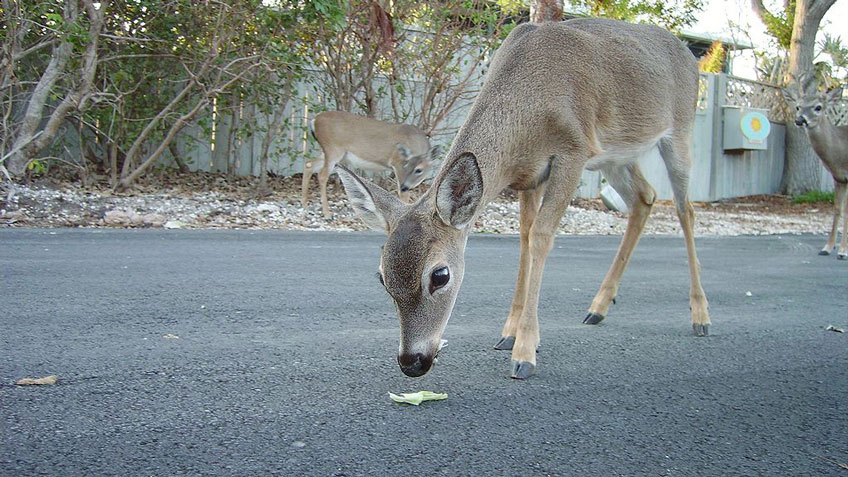 This Key deer scored some lettuce on No Name Key. Please DO NOT feed the Key deer. (Image by Marc Averette.)

Diseases Spread in Close Proximity
Sometimes Key deer can be seen with lumpy heads. This is indicative of a cranial infection, which is caused by bacteria. Infections like these can be spread when deer herds increase in number and males lock horns, so to speak, over available does.

Similarly, a nearly catastrophic event for the Key deer was the recent infestation of screwworms, something the U.S. hasn’t seen for half a century. The larvae of infected flies enter open wounds on the deer and essentially eat its flesh, causing long, painful, gruesome deaths. Males are usually more susceptible because of the wounds they receive in fighting other males. Despite being forced to euthanize a 10th of the population, local authorities and the USFWS acted swiftly to halt the infestation in its tracks. The goal was to keep the infestation localized and to eradicate it. To that end, every pet owner leaving the islands was given information and provided with a pet inspection. Fortunately, no infections were found in domestic animals.

Then 120 residents were trained in treating Key deer with bread containing anti-parasitic medication. Finally, since only infected female flies transmitted the disease, 60 million healthy flies were imported to replace the females once they died off. In short order, the screwworm infestation was killed off.

Keys Community Activated to Stop Screwworm Infestation of Key Deer
This report explains how all stakeholders in the Key deer population banded together to help save it from a screwworm outbreak.

Key Deer Follow Fresh Water
One of the drawbacks of urbanization is that septic systems and wells can change where fresh water is found and how it flows. Key deer often spread out during times of plentiful water and then return to Big Pine and No Names keys for their more reliable sources of fresh water. (The deer can be found on 20 to 25 of the tiny islands and often swim the short distances between land masses.) One benchmark of recovery is whether a stable population of Key deer lives on Sugarloaf and Cudjoe keys, but there has yet to be a census taken on those islands. Perhaps the Key deer herd is even larger than known.

Two things are crystal clear. The first is that the Key deer have recovered. They’ve exceeded the carrying capacity of their habitat, which tragically is setting them up for car strikes and the spread of disease. And second, even with those dangers, state authorities in conjunction with the USFWS and Florida residents are more than capable of successfully managing their shared Key deer population.