It didn’t make national news; it didn’t even make local news, but for hunters like me who sometimes hunt close to the U.S./Mexico border, it was certainly big news Friday when a hunter found the human remains of what authorities believe to be an illegal immigrant and/or drug runner who crossed from Mexico into Arizona’s Coronado National Forest. As for how I know of this considering the media never covered it, I was there, 30 miles from the border—and that hunter was my friend.

The previous day, I’d found evidence of what I later learned was a smuggler’s “drop site” where someone had dropped off a “dope load” of marijuana (as shown in the image below). Clearly an old site based on the deteriorated condition of the items left behind, I thought the knotted clothing (circled in black) was odd. A friend with ties to local law enforcement explained, “The illegals who smuggle drugs into the United States wrap them tightly in cellophane, put them in a burlap sack and then tie blanket strips around it to make shoulder straps. They take the bundle apart and leave everything behind as they ‘load out’ and walk back into Mexico. That knotted cloth you found was one of the straps.” Geographically far removed from border security issues, I let that sink in a minute. 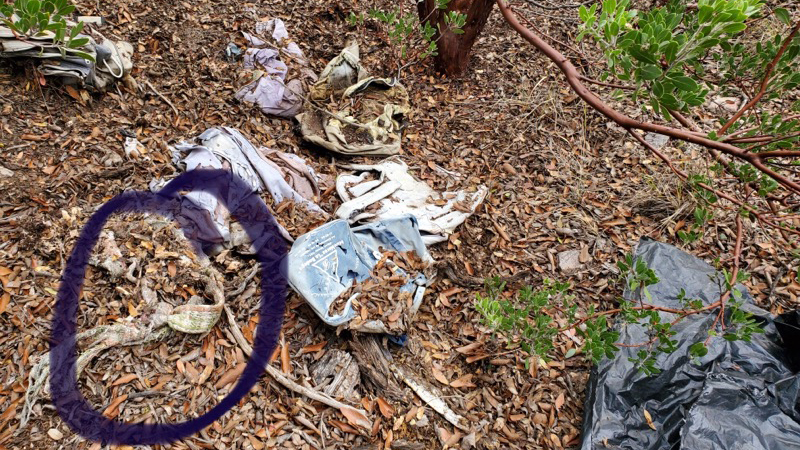 The author came across this pile of debris on a recent hunt in Arizona. It was shortly thereafter that her friend discovered human remains in the area. (Image by Karen Mehall Phillips.)

“It’s amazing when you catch the mules [people who smuggle drugs on their backs],” he added. “They typically carry drugs in 50-pound packs and will have cuts three-quarters of an inch deep in their shoulders from straps rubbing into them.” I thought of how we hunters carry packs too, but ours have padded shoulder straps for comfort. “The illegals all have scars when they are caught,” he said, “as it takes them days to go the 31 to 35 miles they’re traveling to get where they are going to make the drop.”

While the need to remain aware of our surroundings in general goes without saying, it is worth repeating particularly when hunting one of the four states that border Mexico—Arizona, New Mexico, California and Texas—as criminal organizations exploit the porous southwest border. According to the Department of Justice, Arizona is a particularly “high-intensity drug trafficking area as cartels diversify ways to transport drugs” into the mountains and rolling hill-country canyons and ridges.

In fact, as far back as June 2014, an NBC story noted that traffickers crossing into Arizona had become “more aggressive and dangerous to anyone standing in their way.” At the time, Cochise County Sheriff Mark Daniels emphasized, “This is not just Arizona’s problem. This is America’s problem.”

While law enforcement says there is no direct threat to hunters from drug cartels, as reported by this website, illegal immigrants and drugs continue to enter the United States. The fact we hunters hit the trail to the remotest of remote places year-round means remaining aware of our surroundings is just good common sense.