How Long before Cougars Realize Humans Are Prey?

Recently it was discovered that three cougars—an adult female and her full-grown young—were feeding on human remains a mere 50 feet off one of the most heavily used hiking trails in the country. Pima Canyon Trail starts at the edge of Tucson, Ariz., and climbs into the Catalina Mountains north of the city. Since it has generally been thought cougars only eat what they kill, suspicions raged that the cats had finally killed a person on one of the most popular trails in the West.

Despite the efforts of protectionists groups to convince the public otherwise, cougars are far from endangered. In fact, the International Union for Conservation of Nature lists the cougar range-wide as a species of “Least Concern.” These cats are, in fact, very abundant in the Catalina Mountains near Tucson thanks to an abundant population of whitetail deer and other prey. The uneasy mixture of extremely high recreational use and dense cougar populations in places like this, and elsewhere, sets the stage for bad things to happen. As cougars experience the sights, sounds and smells of humans on a frequent basis with no negative interactions, their opinion of us shifts from fear to curiosity. 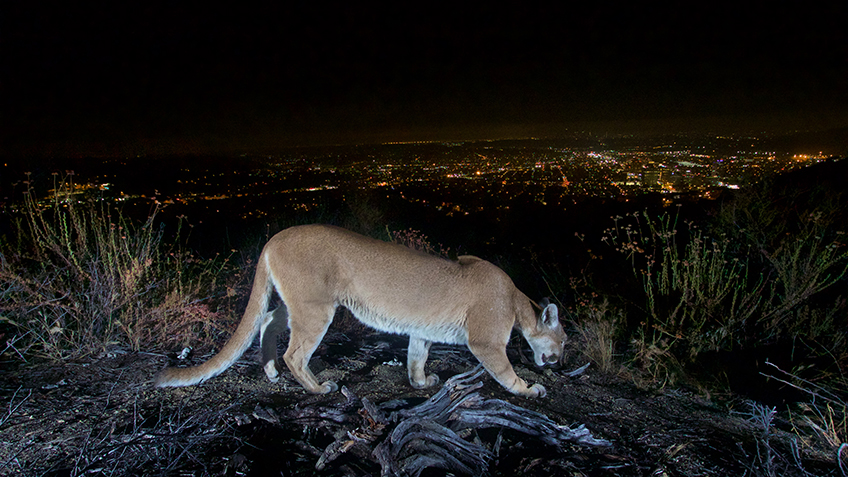 This uncollared adult female mountain lion was photographed with a motion-sensor camera in the Verdugos Mountains in August 2016. The city lights of Los Angeles are in the background. (Image by the U.S. National Park Service.)

The cause of death of the Tucson-area hiker has not been announced publicly, but evidence at the scene indicates it was not the lions that caused his death. It is being investigated as a homicide, and police have a person of interest in custody. Still, we had three adult-sized cougars brazenly feeding on a human right next to a well-used hiking trail. All three cougars showed no fear of law enforcement officers investigating the scene. Is a lack of fear of humans unnatural behavior, or are some lions today just reacquainting themselves with the fact that unarmed humans are easy prey? Maybe seeing humans as prey is a natural behavior that has been altered by the application of gunpowder and lead for the last few hundred years.

Bold and human-habituated lions are becoming more common throughout the West as humans push farther into wild places in greater numbers. Cougar predatory attacks, where the person is fed upon, will continue to increase in the coming years. Although cougars eat skunks, porcupines, rabbits and smaller predators, they depend primarily on human-sized hooved animals like deer, bighorn sheep, domestic livestock and even pronghorn antelope. We know from a lot of predator-prey research that predators will switch their preferred prey if another animal is more vulnerable and easier to kill. This act of “prey switching” happens all the time in the wild.

Earlier research studies consistently showed cougars are normally not scavengers, eating only fresh meat they ambushed. However, in the last 20 years more and more research has revealed a surprising amount of scavenging by cougars. Researchers in Oregon radio-tracked 24 cougars with GPS collars and documented that 15 of them scavenged carcasses at least once. Another study in Canada included 44 cougars and 64 percent of them scavenged carcasses they didn’t kill. A genetic analysis of food items in cougar feces in remote areas of the Arizona-Mexico border turned up traces of human DNA in their diet—presumably scavenged human remains. 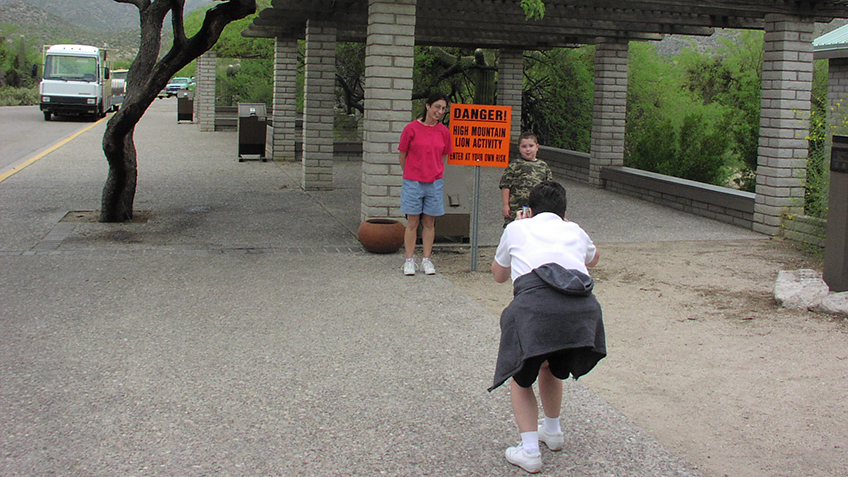 A family pauses to take a picture at a warning sign about the high incidence of mountain lion activity in the area. Mountain lion attacks on humans are on the rise. (Image by Jim Heffelfinger.)

The concern with cougars scavenging on human remains is, of course, that they could find out we are delicious. Whether it’s natural or unnatural behavior, habituated cougars with little fear of us coupled with a positive experience feeding on humans is probably not a good combination. Could this exposure be a gateway experience leading to future predation on humans? This is not a question that lends itself well to experimentation if you are responsible for public safety.

It has been well-documented in the scientific literature that some cougars often develop their own specialized predatory behavior. Some will start killing a certain type of prey almost exclusively. It may be mostly javelina in the Southwest, or porcupines in forested areas or one cat might focus exclusively on bighorn sheep. It is not hard to envision a cougar deciding to focus on humans, perhaps after being introduced to that prey source through a scavenging event. There are also several well-known examples of individual African lions seeking human prey repeatedly and ignoring that invisible force we think surrounds us.

Every time a lion attacks a human, we go to great lengths to write it off as an unusual event where the lion must have been sick or injured or mistook the human for its “normal” prey. There is no doubt that attacks on humans have increased. At this point, it is not clear whether this is because more people and more cougars are trying to occupy the same space at the same time or if we are witnessing a shift in how they view us. The recent incident in Tucson causes us to rethink the imaginary barrier between us and large predators. The beauty and lethality of cougars is to be respected. We may have to eventually come to the realization that we are not only on the menu, but low-hanging fruit in terms of vulnerability.

About the Author
Jim Heffelfinger is a certified wildlife biologist with wildlife degrees from University of Wisconsin—Stevens Point and Texas A&M University—Kingsville. He has worked for the U.S. government, state wildlife agencies, universities and the private sector. Jim is the author of “Deer of the Southwest,” in addition to authoring or coauthoring more than 200 magazine articles, 50 scientific papers, 20 book chapters and five TV scripts. He is a Boone & Crockett professional member, a full research scientist at University of Arizona, chairman of the Western Association of Fish and Wildlife Agencies’ Mule Deer Working Group representing 23 western states and Canadian provinces and wildlife science coordinator for the Arizona Game & Fish Department. He has received the Wallmo Award, given to the leading mule deer biologist in North America and the 2009 Professional of the Year award from the Mule Deer Foundation. Jim is also a member of the International Defensive Pistol Association and the U.S. Practical Shooting Association and competes weekly with his 1911.