“Pass It On!” Introduces Youths to Traditional Outdoor Pursuits

Imagine a program to introduce young people to hunting that not only sets up the hunts and selects and invites the young people to participate but also selects and invites the adult hunting mentors, conducts the hunts and then witnesses the new young hunters returning for more hunts. No need to imagine, as such a program already exists. Fittingly called “Pass It On! Outdoor Mentors,” it currently operates in Kansas and Iowa and, given the program’s success, it might well be coming to your state one day soon.

Pass It On! has its roots in a 1999 program of the Kansas Department of Wildlife, Parks and Tourism (KDWPT) to bolster the ranks of hunters, anglers and other outdoor pursuits by matching caring adults who want to share their experience with children who want to learn about and experience the great outdoors. It has influenced similar programs in Alabama, Alaska, Maryland, Michigan, Minnesota, New York, Pennsylvania, Texas, Virginia and Wisconsin. Thanks to significant support from the National Shooting Sports Foundation, the program first began expanding in 2003 with pilot programs launched in Pennsylvania and Texas. The Rocky Mountain Elk Foundation also played a significant role in program expansion.

In 2006, Pass It On! broke away from the KDWPT and became a nonprofit 501(c)3 charitable organization. Program employees now work with schools and develop relationships with school staff. If there is interest in hunting, the Pass It On! staff then sets up a hunt, usually with the help of a local landowner or two.

According to the organization’s President and CEO Mike Christensen, he or his staff then contact various wildlife conservation groups to ask for mentoring help, often attending a given group’s fundraising banquet to drum up interest and support for Pass It On! And talk with prospective adult mentors.

In explaining the hunts Pass It On! offers, Director of Field Operations Brittany Waldman explains, “Our hunts typically are one day events, with four to six kids and a mentor for every one or two of the young people. We’ve found that the parents are very willing to bring their children to these hunts, even if it means driving a good many hours.” 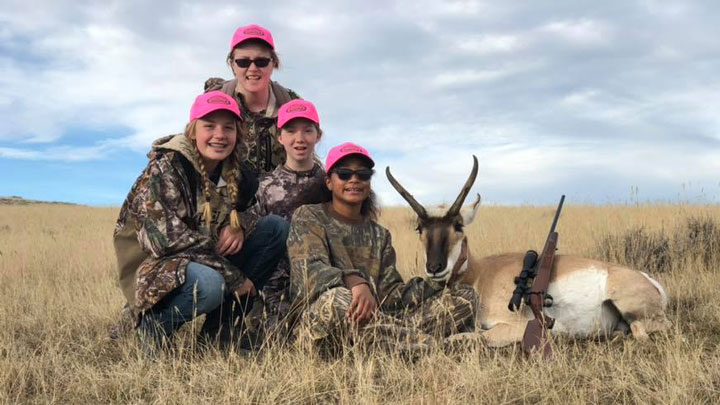 The Kansas hunts, for example, have included everything from deer and waterfowl hunting to hunts for upland game and turkeys. Last year, Pass It On! administered 89 different hunts in Kansas that took 220 young people afield. In the process, the program worked with 44 separate schools to identify students interested in hunting.

“And it’s not a one and done thing for us,” Christensen emphasized. “Once a young person has hunted with us, he or she can hunt again and again.” In fact, Christensen added, “We encourage it. We want him or her to find the kind of hunting they really connect with now so there will be a much better chance of doing that hunt once they are adults.”

For 2020 and beyond, Pass It On! is pushing forward with an exciting initiative that promises good things for the future of hunting.

“We’re really excited about our new Shooting Sports Outreach program,” said Christiansen. “We ran it last year for the first time here in Kansas with a great deal of success, and this fall we are launching it in Iowa.”

As Christiansen explained, up until now hunting recruitment programs have tended to ignore a group of young people already very active in the shooting sports: members of high school trap and skeet shooting teams.

“When you think about it, they’re the perfect fit for hunting,” said Waldman. “They already shoot, and most of the students own shotguns. They’ve had to take a gun safety course before they can be on a shooting team, and for most of the kids we worked with in Kansas last year, that was hunter education.”

Last year’s trial run saw 220 shooting sport athletes from 44 different teams across the state participate in 89 different Pass It On! hunts. Pass It On! is also running the Shooting Sports Outreach program in Iowa this fall, working with the Iowa Department of Natural Resources. The state is home to approximately 4,000 students on school trap and skeet teams, and the plan is to work with 15 to 20 of those shooting teams to generate up to 30 hunting events.

As Pass It On! continues to grow and expand, more mentors will be needed as will more funding to help bring this program to many more young people. Interested in becoming a Pass It On! hunting mentor or providing support in other ways? Check out this important and effective program’s website by clicking here.

Editor’s Note
Pass It On! Outdoor Mentors is a great example of programs that highlight hunting and the shooting sports as integral parts of our mainstream American culture and support the national “R3” movement to recruit, retain and reactivate more hunters and shooters. As reported by this website, the R3 movement was launched by the Council to Advance Hunting and the Shooting Sports specifically to facilitate the growth of these traditional outdoor sports and educate the public on the contributions hunters and shooters make as the primary funders of wildlife conservation. For more information on R3, click here.—Karen Mehall Phillips, Director of Communications, NRA Hunters’ Leadership Forum

About the Author
NRAHLF.org contributor Brian McCombie is a field editor for the NRA’s American Hunter and writes about firearms and gear for the NRA’s Shooting Illustrated website. He is a member of the National Rifle Association and the National Shooting Sports Foundation. Brian likes hunting hogs, shooting 1911s chambered in 10 mm and .45 ACP, watching the Chicago Bears and relaxing with his two cats, Peanut Morgan and Simon.