Voice of Leadership: Are We Doing Hunter Recruitment Right?

It’s a slogan we’ve all heard countless times. When we take an eager youngster along on a hunt, we’re doing our part to introduce a new potential hunter to the ducks, the calls, the decoys, the dogs, the blind. And it makes us feel good, because we believe we’re helping to create “the next generation of hunters.”

For decades, nearly all hunter recruitment programs—whether for deer, turkeys, upland birds or waterfowl—have focused on youth, and are usually held on special days designated by the state or province as youth-only hunting seasons. The premise has been that if we get those youngsters hooked on hunting early, we’ll have them for life.

But is the youth-driven, “take a kid hunting” approach really working?

Strong evidence suggests it is not. Or at least that it’s not working well enough to sustain the ranks of our hunting population in North America.

Declining Hunter Numbers
Despite what you might encounter on opening day or a Saturday morning at your local public hunting grounds, the number of hunters in North America is declining.

The 2016 National Survey of Fishing, Hunting and Wildlife-Associated Recreation shows that 11.5 million people aged 16 or over hunted at least once during the year. That’s down from 13.7 million people in the same survey in 2011. The survey has been conducted every five years since 1991 by the U.S. Fish and Wildlife Service.

“The level of hunting in 2016 is at its lowest level in at least the past 25 years,” the survey’s authors concluded.

The number of waterfowl hunters has followed the same trend. After peaking in the 1970s at about 2.5 million, the number of active waterfowlers in North America dipped to 1.2 million in 2015.

Alarmingly, many people in the conservation community are worried we’re headed for another huge drop in hunter numbers when the Baby Boomer generation ages out of hunting participation. Statistics show that as many as one-third of hunters in North America will be hanging up their shotguns and mothballing their decoys within the next decade or so.

Some people welcome a world with fewer hunters. “Less competition for hunting spots” and “more ducks for me” are the standard rationale offered up in support of the idea that fewer hunters afield is a good thing.

Why does it matter if we lose hunters?

Simply put, hunters are the lifeblood of funding for conservation.

In the North American Model of Conservation, which is lauded worldwide for its amazing success at restoring and maintaining healthy populations of game and non-game animals, as well as for providing important environmental benefits, we—the hunters—are paying the bill.

Hunting generated $26.2 billion in 2016, money that fuels public-lands hunting, habitat restoration and the entire suite of wildlife conservation work across North America. It’s a user-pay system, and because the sportsmen and women have been willing to buy licenses and stamps, and to voluntarily fund conservation work, we all get to enjoy the benefits of hunting.

But right now, an ominous cloud hangs over our future as the number of hunters continues to shrink across North America.

The equation is simple: Fewer hunters equals less ducks in the sky and fewer places to hunt them.

“If you care about the future of hunting, we need more hunters,” said Joel Brice, vice president of waterfowl and hunter recruitment programs for Delta Waterfowl. “As the number of hunters drops, we’re flirting with being irrelevant.”

The Broken Chain
Throughout history, hunting has been a tradition passed down from one generation to the next. Somewhere along the line, however, the chain of hunters was interrupted, or at least, altered.

“The age composition of existing hunters shows a large cohort of people who have 5 to 15 years of hunting participation left,” Brice said, pointing out that license sales data consistently shows most hunters quit at about 70 years old.

At the same time, the other end of the hunter age spectrum shows that not enough teenagers are becoming hunters to replace those who are quitting.

“If the older generation of hunters right now had replaced themselves one-for-one, we wouldn’t be in this situation,” Brice said.

So, what happened to the children of the Baby Boomers? Why haven’t they joined their parents in duck blinds and goose pits?

No one knows for certain, but most experts blame urban drift in society as a strong culprit, pointing out that today’s youngsters are far more likely to grow up in a city or suburb than the kids of previous generations. Young people are less connected to landscapes where hunting occurs, and demands on their time for sports and other school activities are arguably stronger than ever, too.

Take a Kid Hunting
No one will argue that taking a kid hunting is a bad thing. Exposure to hunting is positive.

However, we should not expect a young person to immediately become a self-sustaining hunter. That urban or suburban boy or girl who tagged along during the special youth-only season has huge hurdles to overcome to repeat the experience, even if they loved every moment of their first taste of hunting.

“A 12-year-old is dependent on parents for money, can’t drive, doesn’t have the necessary gear—including access to a shotgun—and probably doesn’t have a place to hunt,” Brice points out. 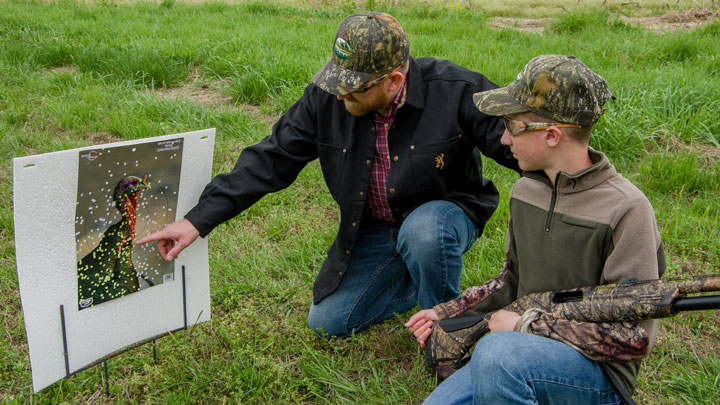 Most hunter-mentorship programs are a one-and-done experience, and therein lies a problem.

“The reason most groups or people do a one-and-done hunter recruitment event is because it’s easy, it makes them (the adult mentors) feel good and they believe it works,” Brice said. “But in many cases, you might have created a hunter, but you’re not retaining that hunter.”

Clearly, the exception is a child growing up in a hunting family who conceivably would have multiple opportunities to hunt again.

Another downfall of many hunter recruitment efforts is that often, the kids who sign up for the programs are children from hunting families. In effect, a lot of hunter-recruitment programs are catering to young people who are already well along the pathway to becoming a hunter.

“The average participant is young, and a large percentage of them already have hunting experience,” Brice said. “They are going to become hunters anyway without the benefit of a hunter-recruitment event. There is value in keeping a kid hunting, but we’re not adding a new hunter.”

Targeting a Different Age
The application of the R3 model—which stands for “hunter recruitment, retention and reactivation”—is changing. Government and non-government agencies relying on the critical revenue hunters provide are emphasizing a new target for recruitment: Young adults.

Non-hunters in their 20s to early 30s—particularly those who come from social groups with an open mindset toward hunting—are much better equipped to become waterfowlers.

Young adults who are into eating “clean” foods, have peers who hunt or have some connection to outdoor activities such as canoeing, rock climbing, hiking or biking, make good candidates to take up hunting.

“The rate of hunting adoption of a 20-something is much, much faster than that of a kid,” Brice said. “The young adult probably has a vehicle, has money to buy hunting gear and has the time to go hunting.”

While a kid who participates in a mentored hunt might have to wait a full year or longer for another opportunity—and could easily lose interest—the young adult can likely go again the following weekend. By introducing hunting to a person with the means to repeat the experience, you truly are creating a new hunter this season, and for next season, too. “And when they have kids, they can recruit their own kids into hunting,” Brice added.

Although First Hunt was originally focused on mentoring youth waterfowl hunters, it has expanded in scope to serve hunters of all ages. Chapters have hosted women’s hunts, family hunts and university-student hunts.

A few Delta chapters have developed year-long mentorship programs where each participant is immersed in several aspects of the waterfowl-hunting lifestyle, including shooting clay targets, carving decoys, building and installing duck nest structures, fixing up duck blinds and going on waterfowl hunts.

Delta Waterfowl believes the key to increasing the number of waterfowl hunters in North America—and replacing the massive number of Baby Boomers who are aging out—is to recruit larger numbers of young adults. Currently, about 36 percent of Delta’s chapters host a First Hunt event. It’s a number Brice would love to see at least double.

Another statistic he hopes will rise is the average age of First Hunt participants.

“I’m challenging our chapters,” Brice said. “We need more chapters to host First Hunt events. We also want the average age of participants to go up. We want to focus on young adults and people who are interested in hunting, but who do not already have hunting experience.”

Instead of hanging a flyer announcing the event at the local sporting goods store and taking people on a first-come, first-served basis, Brice suggested displaying the event announcement at a grocery store, CrossFit gym or local university.

“Target places frequented by outdoorsy people who don’t hunt,” he said. “If you’re going to invest time in mentoring a new hunter, let’s make sure that person has the means to continue hunting after the First Hunt event.”