The Wolf Is a Savior of the Environment?

The overwhelming narrative these days from the public, biologists, academics and protectionist groups seems to be a wonderful story of wolves as saviors of the environment. Bringing back wolves, they say, will bring back the aspen, willows, butterflies, songbirds, beavers and change the course of rivers. Some would like us to believe that simply adding wolves to any ecosystem will make that environment healthier and restore it as a fully functioning ecosystem with all its parts. That is not true. Another narrative is the story that adding wolves to the environment will cause the destruction of big game populations and run ranchers out of business. As is usually the case, the truth—and the science to support it—lies between these two opposing narratives. In a scientific paper in 2012, noted wolf expert L. David Mech wrote: “The wolf is neither a saint nor a sinner except to those who want to make it so.” However, at the present, those trying to depict the wolf as a saint are winning the storytelling contest hands down. I guess if you repeat something often and loud enough people will believe it, despite evidence to the contrary. Anyone questioning the scientific support for the “Saint Lobo” story is loudly shouted down as a wolf-hating Neanderthal.

Trophic Cascades
In relation to wolves, the term “trophic cascade” refers to the notion that when wolves are returned to the landscape they will chase around and eat elk and deer, and that will result in more vegetation growth. Vegetation recovering from fewer big-game animals then cascades into a magical restoration of the entire ecosystem back to a pristine condition with all the forest animals returning like in some Disney production.

This concept is not complete fantasy and has a credible scientific basis in theory. There are two primary ways restoring wolves could result in vegetation changes cascading into other benefits. First wolves could eat so many elk that there are simply fewer mouths eating vegetation and the vegetation flourishes. A second idea is that maybe just having wolves chasing elk out of meadows and away from streams will reduce their feeding in those areas and allow vegetation to recover. Both scenarios are possible—under a narrow set of circumstances. There is no disputing that wolf restoration has the potential to affect populations of elk and deer and, therefore, plants, but the real question in each case is just how much credit does the wolf get?

The Yellowstone Experience
Most studies of trophic cascades have been conducted in national parks, with Yellowstone National Park (YNP) being the most famous showcase for selling the trophic cascades story. By the early 1990s, the Yellowstone Northern Range elk population had grown to about 19,000, which was way too many for the habitat to support. The very next year, after being wolf-less for 60 years, 14 wolves were reintroduced into the park with another 17 wolves added the following year. The number of wolves in the Northern Range grew steadily for a dozen years and peaked in 2003 at 98 wolves. The elk population, however, began to decline the year before wolves were released until they hit rock bottom at 3,900 in 2012, a mere 20 percent of the 19,000 estimated before the wolves arrived.

It seems simple to conclude that the increase in wolves caused the decline of elk, but nature is never that simple. As the wolf population grew, many species of plants and animals in YNP were changing in number and distribution. Research began documenting the wildlife and landscape changes and some people immediately started to attribute all ecological changes to the “beneficial” presence of the wolf. In the mid-2000s, researchers from Oregon State University measured aspen and willow growth along streams in Yellowstone and concluded that these shrubs were growing back at a higher rate in the core versus the edge of wolf territories. Other studies documented that the abundance of birds, beetles, butterflies and beavers increased after the wolf returned. Wolves were even credited with improving ground water conditions, changing the course of rivers and reducing the effects of global climate change. 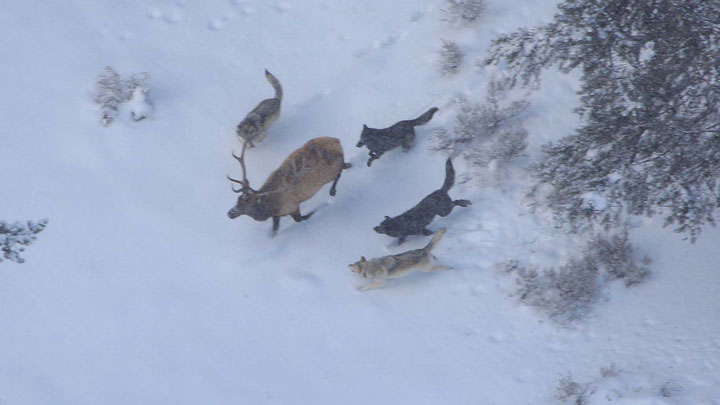 It appeared the wolves were both reducing elk numbers and moving them around to allow the formerly overgrazed and over-browsed park to recover. This made the wolf a hero for single-handedly restoring the crown jewel of our national parks. A unified wolf marketing message emerged from environmental groups, and like-minded researchers, that wolves were not decimating elk herds. They were changing elk behavior by moving them around, causing a restoration of the environment. A savior was born. It is such a perfect story and people started to trip over one another to share it, write about it and repeat it. It was an irresistible message for those who had no training—or interest—in the science.

Trouble in Paradise
It has been said that one should never let ugly facts ruin a beautiful story. This particular story started unraveling in 2010 when Matt Kauffman and co-workers made more rigorous measurements of streamside vegetation and showed there was no widespread recovery of aspen in the park despite a 60 percent decline in the elk population. They reminded everyone that the height of aspen and amount of browsing were influenced by many factors besides wolves.

About the same time, Arthur Middleton was researching the idea that wolves scared elk so much it reduced grazing and browsing in certain areas, allowing vegetation there to recover. He found little or no cascading effects of wolves harassing elk out of favored feeding areas. The dramatic reduction in the number of elk in Yellowstone has relaxed browsing pressure on plants, but Middleton concluded the recovery of streamside vegetation was not related to elk fearing wolves would eat them there.

Further eroding the legend of Saint Lobo was the work of Thomas Hobbs and his colleagues on the recovery of willows in Yellowstone. They concluded wolves hadn’t had much effect on willow recovery. Instead, rising water tables, precipitation patterns, changes in stream flow and changes in the floodplains were the primary influences that allowed willow to recover in some areas. It seems obvious that the loss or reduction of wolves, grizzlies and other top predators allowed elk and bison populations to overpopulate the Yellowstone landscape for decades. Uncontrolled elk populations contributed to the loss of willows from Yellowstone, and as willows disappeared so did the beavers.

By the mid-1980s beavers were returning to the drainages along the south edge of the park, but wolves didn’t bring beavers back to the Northern Range of Yellowstone: Biologists did. Between 1986 and 1999, biologists released 129 beavers on the Gallatin National Forest in seven drainages just north of the Yellowstone boundary. Through their alteration of the water table and streamflow, beavers had more to do with the recovery of streamside vegetation than wolves did, but they lacked an organized public relations effort to give them rightful credit.

Many other ecological changes have occurred that contribute to a far more complex picture of Yellowstone than is being told to the public. Moose abundance also declined dramatically after 36 percent of the park burned in 1988. The grizzly population has increased tremendously and caused a three-fold increase in predation of elk calves. The worst drought in a century hit the region in the mid-1990s, which reduced the number of elk calves produced. The harvest of cow elk outside the park continued too long because of uncertainty in whether the reduction in winter survey numbers accurately reflected a declining elk population. Cougar and bison populations have grown and heavy winter snows during some winters affected elk survival and reproduction. All these factors worked together to cause a decline in the Yellowstone elk populations, but that is not the story being told.

In 2014 a video emerged, complete with classic nature-show British narration, that weaves a masterful tale about how the wolf single-handedly created a cascading effect throughout the entire plant and animal communities in the Yellowstone and changed the course of rivers with its divine intervention. The video went wildly viral and warmed the hearts of 42 million viewers and counting. Unfortunately, as reported by this NRA Hunters' Leadership Forum website, that video is 90 percent fairy tale and 10 percent fact.

The truth is that after 20 years of extensive and intensive research, it is clear elk fearing wolves is not driving vegetation recovery in the park. Though wolves certainly contributed to the decline in elk, they did not bring back the birds, butterflies, beetles and beavers. There are far too many complex and complicating things that affect plants and animals to select one savior.

An Honest Look at the Wolf’s Role in the Environment
So many want to point to what happened in YNP as a model of what the natural world can be like when we return wolves to the landscape. The “savior” wolf story is not even entirely true in Yellowstone, let alone in more complicated multiple-use landscapes. Ed Bangs, who led the recovery of wolves in the Northern Rockies, referred to YNP as “3,400 square miles of paradise … surrounded by reality.” It is naïve to think the Yellowstone experience, no matter how it is interpreted, can be duplicated everywhere wolves are released. The notion of wolves renovating the integrity of the landscape is certainly not likely to happen outside of large protected areas. Where we have ranching, farming, hunting and rural communities, wolves won’t be able to reach the high densities they can in a national park.

Overpopulations of deer and elk in many national parks have impacted vegetation for decades and that is what set the stage for a trophic cascade effect. If deer and elk are already managed well below the carrying capacity of the habitat, then adding more predators to prey on them would not affect the vegetation because it is not being over-browsed. When deer and elk populations are impacting their habitat, hunters also could reduce their populations and keep them moving out of their preferred feeding areas to allow vegetation to recover.

Unfortunately, personal desire to make the wolf look good has resulted in a growing body of manuscripts that lack the quality we expect in scientific literature. Advocates, and some scientists, are trying hard to promote the wolf. It almost appears that some researchers are afraid that if they don’t produce science to “prove” the wolf is necessary to a fully functioning ecosystem then no one will support wolf recovery. In the May 2016 issue of National Geographic, Arthur Middleton remarked “it’s an unproven theory that gets undue attention in the quest to have wolves shine rainbows out of their asses.” And as researcher Mech wrote earlier in 2012, “We don’t have to make the wolf out to be a hero to justify recovery.”

Recently, several scientific papers have been published that call for more rigorous science and highlight the shortcomings of past research claiming the wolf as the savior of the environment. The public needs to hear the truth about trophic cascades; it can be a real phenomenon, but it can’t be assumed by jumping ahead of the research. The removal of predators and a lack of active wildlife management can allow deer and elk populations to increase to harmful levels. But, after such a long absence, the mere return of the wolf will not be enough to undo decades of ecological changes.