Seeing is Believing: The Magic of the Hunting Experience Revealed

My first sit in a deer blind was both uneventful and complex. No animals were harvested. Nothing was explained. My borrowed clothing was huge on me and smelled like dirt. (I later learned why.) I was terrified of the rickety, primitive combination of sticks that passed for a ladder. The floor of the elevated blind was soft in places. My then boyfriend instructed where I could sit and put my feet so I wouldn’t fall through. All in all, it was an interesting experience.

Then the deer appeared. I had never been so close to a wild animal. I had spent my entire childhood and young adult life being “outdoorsy” and going on hikes on manicured trail systems. The deer were so beautiful. We watched does and fawns wander around under us for what seemed like hours, munching on the ground cover.

I remember trying to be as still as I possibly could on my precarious perch. I was sitting on my knees on the floor because there was only one chair and my boyfriend was in it. I vividly recall holding my breath as I watched a young buck saunter in, clearly convinced he was the leading man in the rye field. 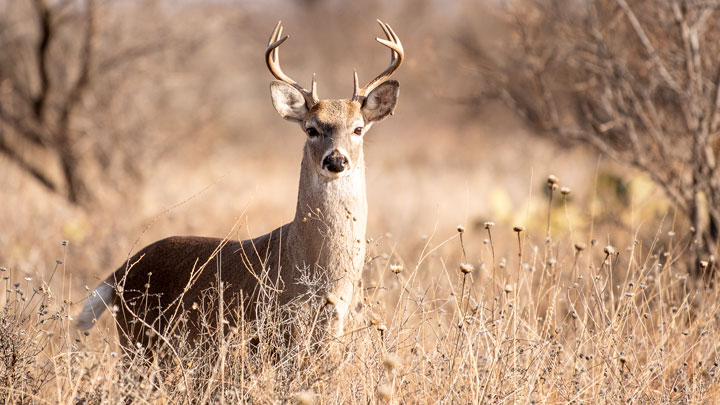 As legal shooting light drew to a close, I felt a mix of both peace and excitement. I felt a unique kinship with the woods and its inhabitants that I had never experienced. As my boyfriend and I walked out of the woods, I focused on walking quietly down the path. When we reached the road, I turned to him and whispered excitedly, “That was amazing. I felt so alive, so connected. I want to write about hunting and how magical it is.” My excitement overrode the whisper as my brain raced with the possibilities.

Little did I know that October evening hunt all those years ago would spark a delayed inferno when it came to an interest in hunting. At that point, I had zero interest in hunting myself but was overcome with the intensity and emotion of a bow stand sit.

And life happened. Building multiple businesses, navigating the complicated waters of night school, getting married and having babies all pushed that idea to the side. Finally, on Nov. 15, 2009, I went on my first deer hunt as the hunter and got a beautiful buck. I remember feeling both elated and surprised. I didn’t feel sad, I felt empowered.

For a wide variety of reasons, it would be nearly nine years before I made the decision to make time to hunt again. Something in my spirit was calling me. It was time to fuel that fire again. It was time to turn my attention to that calling, but how?

In April 2018, an opportunity came up to go on a coastal brown bear hunt. It wasn’t just a hunt. It was the answer to a question asked over a decade prior: How do I capture the magic and mystery of the hunt?

I came home with a beautiful coastal brown bear, but I came away with so much more. I flew home with a sense of power, confidence peace and ability. I realized I was fulfilling a calling that was placed on my heart on that very first sit. It was both humbling and exhilarating.

Since then, I have been blessed with some incredible hunts, both as hunter and storyteller, around the world. For many hunters, the highlight of “camp” is the camaraderie and the stories. How many times as a hunter have you heard, “Tell me the story?”

A hunt is so much more than an animal on the ground. It is the challenge, the trials, the failures, the victories and the people with whom we share our experiences. My first “hunt” was years before my first time in the blind with a rifle and a goal. The seed was planted in that rickety blind with borrowed, oversized camo.

Today the passion is even stronger than what that wide-eyed girl experienced years ago. The love of the hunt has only grown deeper and the passion for the “why” behind the “what” has become more deliberate.

Your first hunt may have resulted in an animal. Or it may have laid the groundwork for a lifetime commitment to the relationship between humanity and nature, hunting and wildlife conservation—and a love of the stories that highlight the precious way of life that it is.

IN THIS ARTICLE
first-time hunter wildlife encounters andrea bogard
More
SUBSCRIBE
RELATED
Vegan-Turned-Hunter Shares Why Hunting Ensures Conservation
News
Turn that Safari into a “Stay-fari” This Fall
News
Examining Hunter Ethics and Morality
News
How Effective Are You as a Hunting Mentor?
News