An Elk Hunt in Missouri?

If all, goes as planned, a handful of Missouri residents will be afield next fall trying to fill their elk tag.

According to The Missourian, “The Missouri Conservation Commission on Oct. 11 [2019] approved the framework and regulations for a possible elk season and will incorporate those in the wildlife code that [took] effect Dec. 30 [2019]. The move comes after the Missouri Department of Conservation (MDC) restored a wild herd of elk to the state between 2011 and 2013.”

The final decision on a possible elk hunt won’t be made until April 2020, “when the herd being established in and around Peck Ranch Conservation Area will be assessed and the conservation department will establish an ideal number of permits to be issued. There’s a chance it will decide no permits should be issued until a future year.”

The proposed framework of the hunt has an archery portion Oct. 17-25, 2020, with a firearms season running Dec. 12-20, 2020. In addition, “two kinds of permits will be issued through a random lottery. All Missouri residents who are at least 11 years old and have their hunter-education certificate or are exempt from certification because they were born before Jan. 1, 1967, would be able to apply for a general permit. The permit would allow them to hunt one antlered elk in open counties.

A second “landowner” permit would allow that landowner to take one antlered elk on their property. In total, the current plan has 10 or fewer permits being issued, based on an estimated population of 200 elk. If any permits are issued, one will be guaranteed to be a landowner permit. 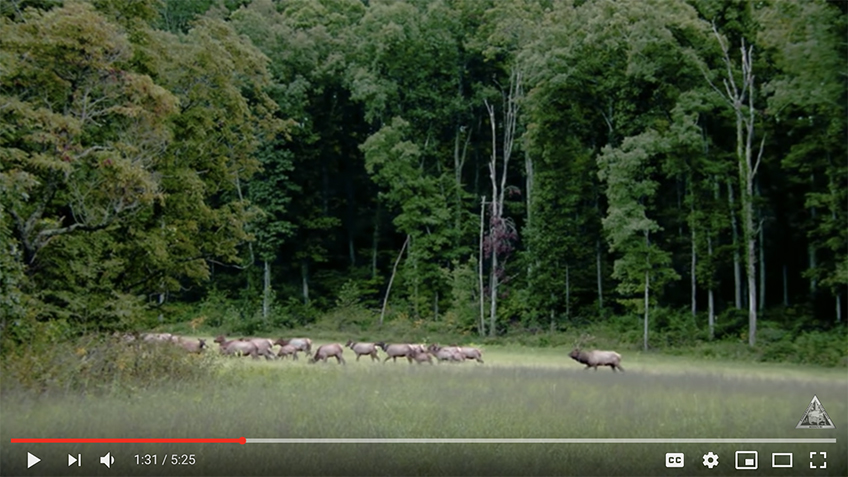 The Missouri elk restoration plan calls for maintaining the herd in the Ozark Mountains/Plateau. There, the human population is scarce, the roads are few and the percentage of public lands is highest. (Still image of video footage by the MDC.)

According to a press release from the MDC, “Elk are a native species in Missouri but were hunted to extinction in the state through unregulated market hunting during the late 1800s. MDC worked with the Kentucky Department of Fish and Wildlife Resources to reintroduce the native species by capturing and transporting wild elk from Kentucky to a remote area of the Missouri Ozarks. The reintroduction effort took place in 2011, 2012 and 2013 with most of the 108 relocated animals being cow elk with some calves and immature bulls.”

The reintroduction has worked! The elk have steadily expanded their range and today are found in portions of Carter, Reynolds and Shannon counties; nearly 80 percent of the elk range is on Missouri public lands. The current estimate is that some 175 elk make their home in Missouri; MDC’s goal is for between 400 and 500 elk.

MDC has provided much of the funding for this reintroduction, with support from the Pittman-Robertson Fund, an excise tax on firearms and ammunition used to fund conservation projects at the state level with matching dollars. 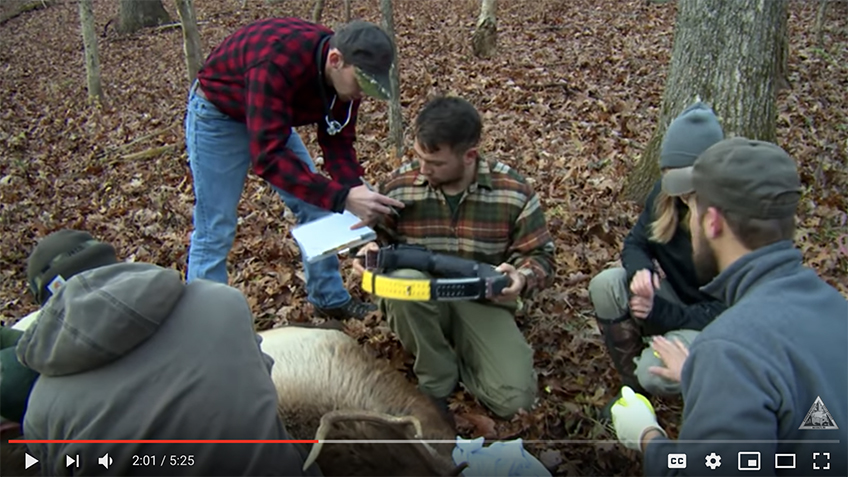 The scientific research conducted by the Missouri Department of Conservation guides the management practices in the field. As the herd continues to increase, legal and regulated hunting will be one way of continuing to manage a healthy herd. (Still image from video by the MDC.)

One of the nation’s top conservation groups, the Rocky Mountain Elk Foundation (RMEF), has also played an important role in bringing elk back to the "Show-Me" State.

“RMEF was engaged in conversations with MDC early on in the reintroduction process,” said RMEF’s Director of Habitat Stewardship Programs Karie Decker. “In 1999, the Conservation Commission directed staff to conduct an elk restoration feasibility study. We provided financial and technical assistance for the feasibility study to assess habitat suitability, plus biological, social and political impacts.”

The reintroduction idea was put on hold for another decade, but in 2010 the Commission revisited the elk restoration draft, brought it to the public once more and within a year elk were being placed on the ground in Missouri.

“To date, RMEF's 4,500 Missouri members have helped deliver more than $2 million to the effort, helping fund everything from capturing the source elk in Kentucky to greatly enhancing more than 8,500 acres of new habitat in the core restoration zone,” Decker noted. “RMEF financial and technical assistance (and volunteer support) provided radio collars, disease testing, building holding pens in [both the] source state and at [the] release site, and feed for elk while being held in pens, among other things.”