No group does more to protect, preserve and promote the Second Amendment and hunting than the National Rifle Association (NRA), founded in 1871. But we would be remiss on this NRA Hunters’ Leadership Forum website if we didn’t highlight how the NRA also works with many like-minded pro-hunting and Second Amendment groups in the country, groups that also work to safeguard our guns, hunting and the shooting sports. Among those groups is the National Shooting Sports Foundation (NSSF).

NSSF’s mission? Simple and straightforward: to promote, protect and preserve hunting and the shooting sports. As part of that mission, NSSF had produced an informative and easy-to-share video infographic titled, “How Wildlife is Thriving Because of Guns and Hunting.”

NSSF Video Explains Hunters' Contribution to Wildlife Conservation
Even since the making of this video, P-R funding has increased to over $13 billion.

It is the perfect video to share online and in social media with hunters and conservationists; it would also go a long way to explaining to non-hunters the impressive amount of funding that hunters and recreational shooters have contributed to American wildlife conservation—and continue to contribute each and every year.

As “How Wildlife is Thriving Because of Guns and Hunting” points out, since the late 1930s, hunters, target shooters and the firearm industry have been the nation’s largest contributors to wildlife conservation, paying for programs that benefit America’s wildlife, its habitat and all who love the outdoors.

In fact, the U.S. Department of The Interior announced in 2017 that firearms and ammunition manufacturers contributed a record $780 million in excise taxes in 2016 through the Pittman-Robertson (P-R) Wildlife Restoration Program. Through the year 2019, according to NSSF, P-R will have donated a whopping $13 billion-plus to wildlife conservation.

As this website has tracked, these monies are distributed to state wildlife and conservation agencies for purchases of lands and funding for conservation programs that conserve and manage wildlife and habitats. Because of this funding, millions of acres of land have been set aside to conserve wildlife populations across the country. 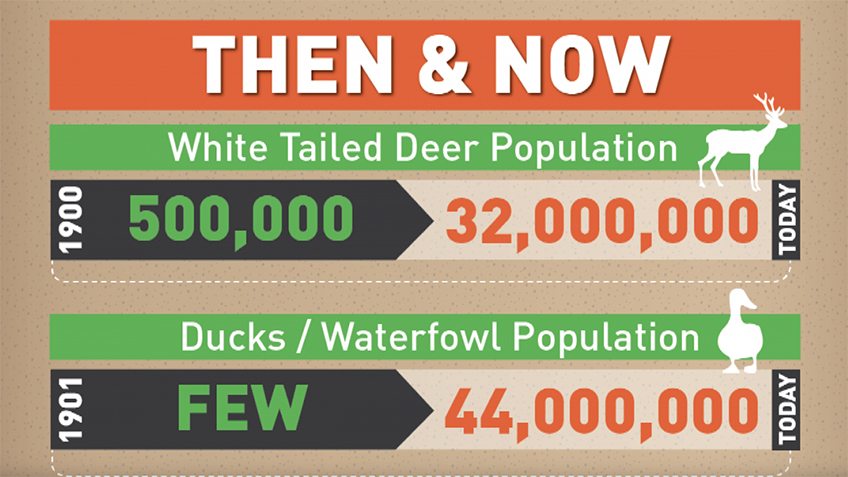 Click on the image above to see the full infographic, which is easy to share to all social media platforms. (Image captured from NSSF infographic.)

And this funding doesn’t simply help game species. Programs to improve wildlife habitat for a specific game animal, for example, also improve habitat and forage for all other wild species that coexist with the particular game animal.

It would be a great thing if American hunters and NRAHLF.org readers would spread this message far and wide by sharing NSSF’s video on their respective social media platforms. And if the NSSF video ruffles some feathers among the animal rights and anti-hunting extremists? Good. But despite their antagonism toward hunting and hunters, these extremists can’t deny this simple fact: Hunters and recreational shooters, and the companies that make our firearms and ammunition, have done more to conserve wildlife populations and wildlife habitat than anyone else in this nation.

And it’s about time all of us got some credit for it.