Walk the floors of the 48th annual SCI Convention in Reno, Nev., Feb. 5-8, the Great American Outdoor Show in Harrisburg, Pa., Feb. 1-9, or any other hunting-centric event and the conversation likely will drift to the need to recruit hunters and protect the future of our culture. Theories and ideas of how and what to do about the hole we need to fulfill abound. As I write this, I can hear this exact conversation taking place. The concerning part is, the actionable item that is coming from the conversation is “we’ll see.” With only an estimated 5 percent of Americans ages 16 and older buying hunting licenses, it’s time to take a better approach. However, the mystery in what to do lies in having tangible action items to execute.

We hunters need to realize that the outdoor lifestyle isn’t so ingrained into mainstream culture. As highlighted in one of the free SCI seminars this week titled, “Building a Generation of Hope in the Outdoors,” affecting change means actively impacting lives through personal connections. The Majesty Outdoor Foundation, through its Tide Changers program, does just that for youths from broken homes across America.

Girls without a father or father figure in their lives have a much higher risk of becoming pregnant as a teenager. Majesty Outdoors restores hope in at-risk youth through the use of mentoring and traditional outdoor sports.

Carolina Sizemore, director of programming for Majesty Outdoors, has spent her career serving at-risk populations of people and has developed an outdoor-based curriculum focused on the timing of hunting and fishing seasons in areas where chapters are located nationwide. In her SCI show seminar, Sizemore remarked that many of the pains of society share a common link in fatherless youth. The statistics of fatherless youth are frightening, with just a few examples as follows:

Enter the Majesty Outdoors Foundation created 12 years ago by Bill Blodgett. Blodgett’s inspiration for impacting the lives of fatherless youth came from his own personal life experience and the adult mentors who helped him. One day, while he was recovering from knee surgery and consuming hours of Outdoor Channel content, he saw the opportunity to create a different type of TV show based around mentoring a youth hunter on a hunting or fishing trip.

The Symptoms of Fatherlessness
In this Majesty Outdoors video, the organization provides the stark statistics on youth who lack a father's influence in their lives. The organization works to mentor at-risk youth traditional outdoor sports.

The interaction that came from taking a few kids out each year to create a TV show quickly showed impact. Blodgett knew there were more kids that needed to have a positive male influence in their lives so the organization decided to work on expanding its platform. Majesty Outdoors widened its mission to create chapters in communities where those in need could be served far more effectively and efficiently. Today Majesty Outdoors continues to expand its chapters program and has impacted the lives of over 3,000 fatherless kids—many of whom have tangible stories to share about being changed by positive role models and the lessons they instilled.

One of Sizemore’s favorite stories comes from a young girl named Savannah who came into the Majesty Outdoors program as a sophomore in high school. Savannah said the breath control and concentration she learned on the rifle range practicing her shooting fundamentals is what helped her to maintain composure when making decisions as she prepared for college. The fact that this young lady directly connects her experience on the rifle range and in the deer blind to making better life decisions is a powerful statement. I remember being at Majesty Outdoors’ annual fundraising gala a few years ago and listening to Sizemore’s story of how the outdoors and the positive role models that were now in her life made a difference. All while she showed the entire ballroom her beautiful south Texas buck she took on camera for their TV show. 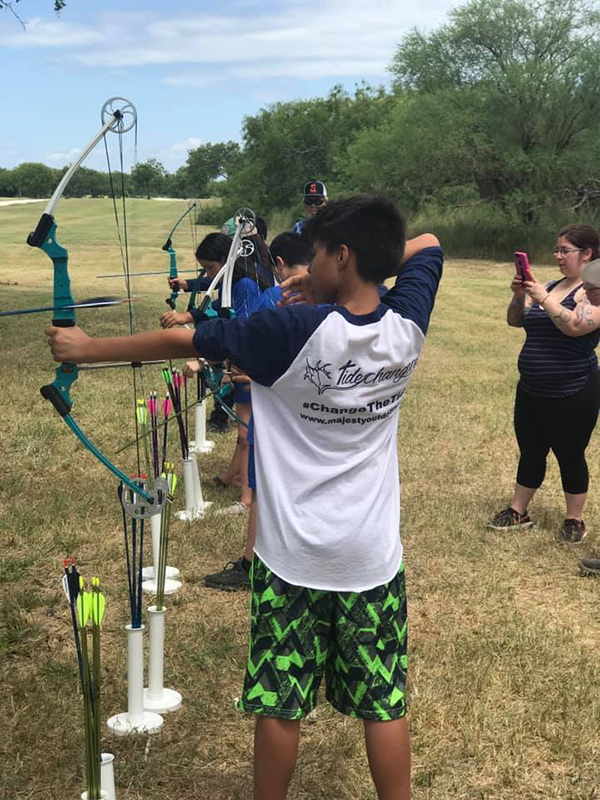 Boys who grow up without a father are more likely to end up in prison than those who have a strong male influence in their lives. Majesty Outdoors is providing that strong fatherly influence through the use of traditional outdoor sports and TV episodes celebrating their success stories.

“This is not about being a superhero,” says Sizemore. “It is restoring a kid and helping them build a future.” In a world blaming toxic masculinity, Majesty Outdoors’ Tide Changers program is proving this to be a false notion by putting strong male role models into the lives of fatherless youth.

Sizemore told us a story of another interesting piece of positive evidence supporting the use of hunting-and-fishing-based mentoring by watching how kids reacted to learning how to shoot guns. “While under the supervision of trained experts,” she said, “I have watched how kids grow in their respect, not just for the gun but also for each other. Even the mothers of our kids have told us of the difference they see in their children.”

Amid all the talk regarding the need to bring the next generation into our culture, Majesty Outdoors is at the forefront of providing a tangible execution of initiatives to impact those who need them most. It is not just a selfish effort to create more hunters and anglers. No, the group’s efforts are resulting in keeping kids off the street and out of prisons while saving lives. The outdoors is the catalyst for teaching kids, and Majesty Outdoors is providing structure for the rest of us to follow, creating a generation of hope.