Fears of COVID-19 have sparked a run on firearms and ammunition as Americans seek self-protection and self-reliance amid nationwide uncertainty, social isolation and economic shutdown.

Firearms, especially handguns, modern sporting rifles (MSRs) and shotguns, have been flying off shelves for weeks as news of the coronavirus spread faster than the virus itself.

“There’s definitely increased interest in our products right now,” according to Jason Nash, vice president of marketing for Federal, CCI and Speer Ammunition. “People are buying firearms and ammunition for self-defense—largely driven by handguns and MSRs,” he said.

Jason Vanderbrink, president of ammunition for the brands’ parent company, Vista Outdoor, released a video thanking its workforce for working around the clock to fulfill customer demand as the company focuses on employee health and safety and remains humbled by the sheer numbers of gun owners relying on their brands at this time of crisis.

“We’re especially pleased with the work of industry organizations like the NRA and NSSF (National Shooting Sports Foundation) to protect gun owner rights and keep shops and manufacturers on essential-business lists, said Nash. “The more Americans who are able to safely work in support of our constitutional rights, the stronger we’ll come out of this crisis."

The father-son team of Steve and Jason Hornady of Hornady Manufacturing also recently released a video on Facebook addressing the ammunition shortage. “We are doing everything we can to ship more, keep people in stock and keep things going,” said Jason Hornady in the video. “We are dealing with all the challenges that are coming at us and there is a new one every hour.” 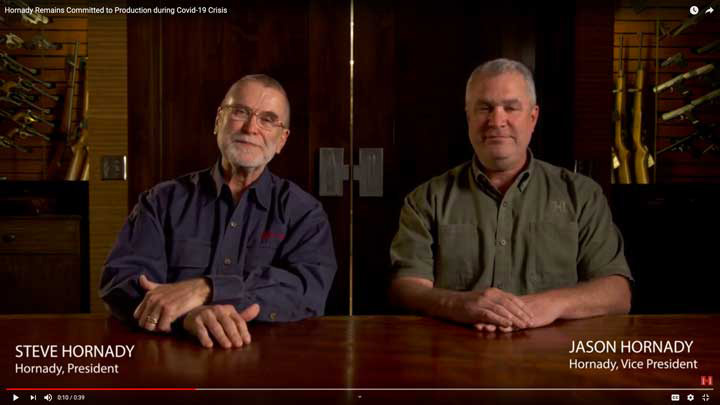 The calibers in most demand “are what you would expect—.223/5.56, 9mm and 6.5 Creedmoor,” said Hornady’s Neal Emery, senior communications manager. “Other defensive rounds are up there as well and other MSR cartridges are high, like Grendel, Blackout and Bushmaster.”

Hornady is also seeing an increased demand for reloading components. “Our techs are fielding quite a few reloading questions because people are home and looking to dust off their presses,” said Emery. “Obviously components are hard to find now as well.” Fortunately for gun owners, companies such as Hornady, MidwayUSA and Brownells continue to deliver on reloaders’ needs and keep up with orders.

Winchester Ammunition is also busy, according to media relations manager Nathan Robinson. “Like many manufacturers in the shooting sports industry, we are experiencing an extremely high demand for our products,” he said. “We are continuing to manufacture and ship our high-quality products on a daily basis.”

Likewise, newer ammunition companies are working to expand their distribution networks during the second quarter of the year. Ammo. Inc., for example, announced the rollout of its full portfolio of loaded ammunition, including its Streak Visual Ammunition, brass casings and munition components, to an additional 201 retail stores nationwide.

On the firearms side, Springfield Armory was deemed an essential business in Illinois through a governor’s executive order and it remains open and is filling orders, according to media relations manager Mike Humphries. “Springfield Armory is currently seeing an even greater amount of demand for its products across all our product lines,” he said. “We do not foresee any impact on our ability to fulfill customer demand for our products, or a negative effect upon our ability to continue the development of future product offerings while still addressing this current surge of demand.” Springfield Armory CEO and owner Dennis Reese, who was named the recipient of NRA Publications’ 2020 Golden Bullseye Pioneer Award, has always been vocal in acknowledging the NRA’s role in protecting Second Amendment freedoms and stands with the NRA and gun owners in delivering products to meet their needs.

Browning is continuing with production as well, with an eye on safety considerations, and expects it to remain constant, providing there are no disruptive coronavirus-related breakdowns. “We are taking necessary precautions to keep our employees safe and keep the flow of products going into the market,” said Rafe Nielsen, director of marketing and communications. “If supply chains stay intact, as well as production, we will be able to weather the storm fairly well.”

Mossberg says it is seeing “a significant increase in orders, particularly in the tactical and personal defense categories—shotguns and handguns,” according to Linda Powell, the company’s public relations director. While Mossberg is a privately owned company that does not release production numbers, Powell said, “All of our facilities are open for manufacturing. We have shifted most of our production to defensive shotguns (590 Shockwave, 590M Mag-Fed and standard 590/590A1 shotguns) as this is the category where we have seen the greatest increase in orders.”

Even with increased production shifts, it is unable to keep up with orders coming in, she said. On a note perhaps signaling a return to normalcy, Powell added that Mossberg also is seeing the usual shift to season-specific categories such as turkey guns.

Nexgen Outfitters, a Nebraska-based retail and online operation, has seen a 75 percent decline in retail traffic, but it is “quality traffic, meaning they are buyers and not just looking or tire-kicking,” according to Mike Riddle, one of three Nexgen co-founders. “We believe it is both virus- and political-related buying.” Calibers such as .223, 5.56, 9mm and .40 Smith and Wesson are “super hot,” said Nexgen co-founder J. Nesbitt, with .45, .380 and 7.62 “trending up but not at the same rate as the others.” And, he added, “It’s interesting to me that true .308 hunting rounds have not experienced much spike.” Reasons for shopping now are balanced between “need protection” and “stocking up because I know the supply chain in ammo is tight and availability will be challenged,” said Nesbitt.

In step with increased reasons for shopping now, as the NRA Hunters’ Leadership Forum website reported Wednesday, the NRA Education and Training Division continues to service the rapidly growing number of first-time gun buyers and just launched four new online gun safety courses to provide access to NRA training 24/7. To keep up with the number of new firearms buyers sensing the need for self-protection during the pandemic, the Justice Department’s Bureau of Alcohol, Tobacco, Firearms and Explosives just announced it now permits federally licensed firearm retailers to provide drive-up or walk-up services to reduce health risks posed by the coronavirus while conducting essential business.

“Based solely on anecdotal evidence, it appears there is an increase of first-timer buyers looking to purchase a firearm for personal protection,” Powell said. “Many are seeking handguns, but not realizing the permit requirements, are then opting for shotguns. Of course, ammo availability, or lack of, may steer purchasers to shotguns over handguns as well.”

Many of these first-time buyers may come out of this crisis with a new appreciation for the Second Amendment. “No question that the current state of our country has reinforced the need for our Second Amendment rights and in many ways opened the eyes of those who may not have been supportive in the past,” Powell said.

As “freedom’s safest place,” the NRA is not about to allow the trampling of the Second Amendment rights exercised by America’s millions of law-abiding gun owners, hunters and shooters. Case in point, on April 2 the NRA filed a federal lawsuit against New York Gov. Andrew Cuomo, the New York State Department of Economic Development, and New York State Department of Economic Development Acting Commissioner, President and CEO Eric Gertler in response to the state’s attack on the rights of New York citizens and residents to exercise their Second Amendment freedoms. The lawsuit focuses on Executive Order 202.8, issued by Gov. Cuomo on March 20 in response to the COVID-19 health crisis labeling gun shops nonessential businesses, making it impossible for New Yorkers to buy a firearm in the state. “There isn’t a single person who has ever used a gun for self-defense who would consider it nonessential,” said NRA CEO and EVP Wayne LaPierre.

As noted by the New York Post, the suit asks the court to declare gun stores essential businesses that can operate during the virus crisis.

One cannot overstate the importance of firearm ownership in a time like this. In a second video posted by Hornady, Steve Hornady said, “Right now there is a panic in our country over what is going on, and it’s unfortunate that it is truly the panic that is driving the problems that we face. But the very reason our Constitution incorporates the Second Amendment, your right to keep and bear arms, is why it is crucial to everyone’s survival today. Our Second Amendment preserves your freedoms.”

This rush rates with past runs on firearms and ammunition, such as in the run-up to the 2016 election, which many thought would result in a Hillary Clinton presidency and renewed gun-control efforts following the eight years of the Barack Obama presidency and, before that, the Bill Clinton presidency, which brought about a ban on so-called “assault weapons.” Plus, fear of knee-jerk political reactions to shootings and other incidents also spark rushes for firearms and ammo. However, Jason Hornady believes this scenario, compared to the last four large-demand jumps he has witnessed, is the “biggest and fastest spike.”

Powell said, “This rush feels similar to past responses, though it has ramped up at a more rapid pace. I think this may be based on the fact most distributors and dealers have been maintaining lower inventories in the past 12 to 18 months.”

But how quickly times can change.

"It’s exciting to see new people purchasing guns, and more women joining our ranks," said Nash. "We’re optimistic their experience purchasing and practicing with their gun and ammo will create long-term growth for our sports and more Second Amendment advocates."

About the Author: Joe Arterburn is a freelance writer whose work appears in NRA publications and other national outdoor magazines and websites. For 10 years, Arterburn was a newspaper reporter—when objectivity was the cornerstone of journalism—before working for more than two decades as a communications professional in the outdoor industry. He lives in western Nebraska with his wife, Cathy. They have three sons, Hunter, Jack and Sam, and three grandsons, Cogan, Lincoln and Quentin, which assures a long line of Arterburns to carry our hunting traditions into the future.