Make a Hunt Reservation to Go Native This Fall

My American Indian guide carefully peaked over the horizon, turned and walked past me, sheltering behind a tree without saying a word. I clutched my bow wondering what he’d seen. Slowly, the most hideous image I could imagine crested the hill, ruffled hair on its black face and two Satan-like horns on its head. The giant bison stopped and stared at 50 yards. My farm-boy upbringing said the buffalo was not coming closer, so I crept forward. The bull turned to flee. I unleashed a heavy arrow aimed at its vitals but struck low.

I was hunting on the Pine Ridge Indian Reservation, or Pine Ridge Agency, in southern South Dakota. Ralph Bearkiller, my guide and herd manager at the time, told me about a rogue buffalo on the reservation that needed to feed the tribe. “It usually charges anyone who gets close,” he told me before the hunt, the reason he exercised such caution when the bull emerged.

Approaching an aggressive beast spanning the size of a truck is serious business. Bearkiller and I spent the next four hours on its tracks. Finally, we crested a hill where the bull lay in a sandy wallow. It paused before fleeing and I buried an arrow into its lungs. On impact it ran a half mile circle and dropped. I carefully moved toward it and with two more arrows finished the job.

Reaching the downed animal, I was astounded at its size and majesty. My hand completely disappeared into its deep fur. The head on the beast was enormous and I quickly understood why Indian tribes held this animal in such high esteem.

“You’ll have to leave while we do our sacred ceremony,” Bearkiller said. “You should know that the meat of this animal will support the tribe, including venison for the elders and for special gatherings like weddings and funerals. You did well to take this animal with a bow and arrow. I think we will call you ‘Topa Wahin Kpe,’” Sioux language for “four arrows.”

That winter when I visited my daughter in Bozeman, Mont., her husband and I took a drive toward the West Gate of YNP. An hour later, we wandered into a buffalo “activist” camp. I interviewed several very suspicious individuals. Pictures were forbidden. Returning home that evening, I wrote the story of the buffalo activists and sent it to the Washington Post where it was published on Jan. 1. Each of these events seemed to be guided by a higher power as I had never written for the Post before or since. I had killed the cantankerous old buffalo, yet its spirit seemed to be controlling my destiny and helping me to publicize the plight of the Yellowstone herd.

Nations unto Themselves
Since that time, I have hunted on the lands of the White Mountain Apache in Arizona, the Tesuque Pueblo in New Mexico and several tribes of the Sioux Nation. Though individual tribal rules vary, there are a few similarities. First, American Indian reservations usually govern themselves. A state hunting license isn’t valid on reservation lands and state seasons and bag limits don’t apply. Second, to hunt on reservation lands you must go through the tribal application process. As you might expect, tribal members get preferences at licenses and greatly reduced license costs (if there is a cost at all) much as Colorado, for example, treats nonresident hunters. It’s great if you live there, expensive if you don’t. Regulations and trespass laws also vary. Some tribes require non-tribal members to have a guide, others do not. Often these tribal guides are used to help with boundary identifications because many reservations are checkerboarded such that non-tribal members own deeded land within the reservation boundary. Given the size of these properties, boundaries are rarely marked.

Bonus Opportunities
Some American Indian reservations offer premium hunting options such as the White Mountain Apache and the lesser known Acoma Pueblo in New Mexico. I hunted Merriam’s turkeys in the White Mountain elk camp and had a hunting guide show me around the area. “Many of my hunters want a 400-inch elk,” he said, “but I tell them, if that’s what you want, we won’t spend time looking at bulls in the 380s.” The Apache guides compare results each year and take great pride in producing the most mature bulls for their clients. Openings for slots are scarce and come with high price tags.

Boosts to the Economy
Many tribes across the West are among the poorest political units in the nation as with South Dakota’s Pine Ridge Reservation where my buffalo hunt occurred. A 2014 U.S. Census Bureau study found that more than 52 percent of residents in Oglala Lakota, the largest of Pine Ridge’s three counties, lived below the poverty line. The reservation endures an 80 to 90 percent unemployment rate with a median individual income of $4,000 a year. As public health suffers, life expectancy—48 years for men, 52 for women—is the second lowest in the Western Hemisphere behind Haiti.

As NRAHLF.org shares regularly, hunters have a tremendous impact on national and local economies. When hunting on reservations, they boost tribal economies while providing direct benefits to many individual members.

Be a part of this win-win scenario for hunters and reservations alike. Start doing some homework on the Internet and reach out to other hunters who are listed as references or who you know have hunted a reservation that draws your interest. For just one example, the Pine Ridge Indian Reservation where I hunted spans more than 2 million acres and offers hunts for elk, whitetail deer, mule deer, pronghorn, small game and buffalo. Click here for more information. 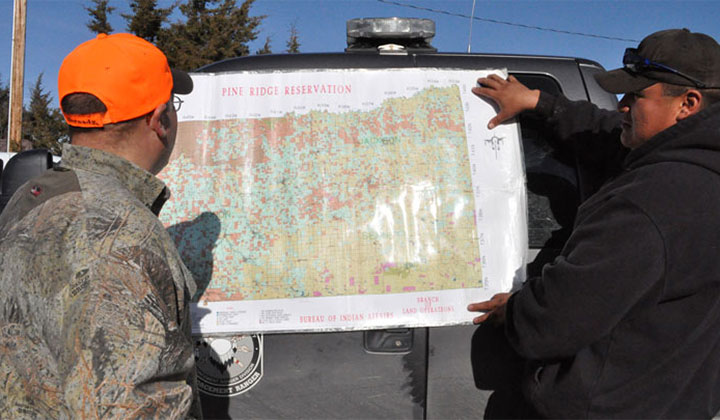 On a fun side note, while checking into your options you can pull up my 2013 article “How to Hunt Indian Reservations.” It was still No. 1 on Google the last time I did a title search.

If your reservation does not have a website, call the given game and fish office and ask questions about application deadlines, the availability of guides and whether the guides have references. If you arrange a hunt, I recommend investing in a GPS app that designates tribal lands from deeded ground.

Finally, not everyone can take all their game meat home with them. If you plan to donate part of your venison or other wild game, consider sharing it with your guide and his family.

About the Author
An avid hunter and outdoor writer for the past four decades, Joe Byers has a long list of award-winning articles, e-books and photographs to his credit. His is also the author of “The Ultimate Guide to Crossbow Hunting,” covering everything a hunter needs to know about crossbow hunting and gear while providing an overview of the history of archery and tips for hunting a variety of wild game species.