October brings all things autumn to Georgia: college football, beautiful foliage, cooler temperatures—which are always welcomed, although last year they were in no particular hurry—and hunting season. It also brings one of the more interesting events I attend: the annual Rock Springs Clinic Sporting Clays Tournament and Fundraiser. Rock Springs Clinic is a 501(c)(3), faith-based, primary care medical facility for uninsured and low-income patients. In its 12th year of operation, the clinic is sponsored by Rock Springs Church in Milner, Ga., along with 120 individual donors, businesses and non-profits. Through this effort, patients living in over 40 Georgia counties receive health care they would not otherwise be able to afford. That is quite a reach for Milner’s population of just under 700.

At the tournament, teams of up to four shooters compete for bragging rights, a small plaque and a gift card from one of nearly 30 sponsors. Most people were looking forward to a chance to win a door prize or the new Benelli shotgun or Glock pistol in one of the raffles. You may be familiar with some of the larger charitable works that hunters perform throughout the country through programs such as Hunters for the Hungry but even in a small community, hunters step up in a big way to aid those less fortunate. This single-day event provided a way for participants to contribute to their neighbors’ well-being in a meaningful way while getting in a little lighted-hearted competition and some shotgun practice.

Last year’s event took place at The Meadows Gun Club and Shooting School in Forsyth, Ga. Forsyth is a quintessential small town, only it has a major interstate running through it—hustle and bustle meets scenic and rural. In operation since 1987, the spacious, well-maintained facility is beautiful. Tall pines surround the course, which is set up in a loop and accessed by golf carts via a gravel trail.

Participants use their upland bird and small game shotgun skills in a circuit of up to 20 different stations where they are presented with varying scenarios that simulate hunting a given wild game species. Clay disc targets serve as flushed quail, doves overhead high and fast, ducks over a pond and rabbits or squirrels bounding across the ground. While sporting clays has been described as “golf with shotguns,” I’ve played golf and have to say I think shooting is way more fun. Each station in this setup throws a set number of targets that requires four or six shots.

I was approached by the Rock Springs Clinic Director Bobbi Riley, my aunt, about sponsoring the inaugural tournament years ago by donating one of my handmade knives as a raffle prize. My aunt had seen the success of similar events and knew a sporting clays tournament would be a great idea for a fundraiser. Herself a new hunter, she recognized the sportsmanship and enthusiasm hunters have and wanted to harness that sense of community. The tournament is now an annual event for me, for which I gladly pause my hunting season. My team even won second place in 2018. 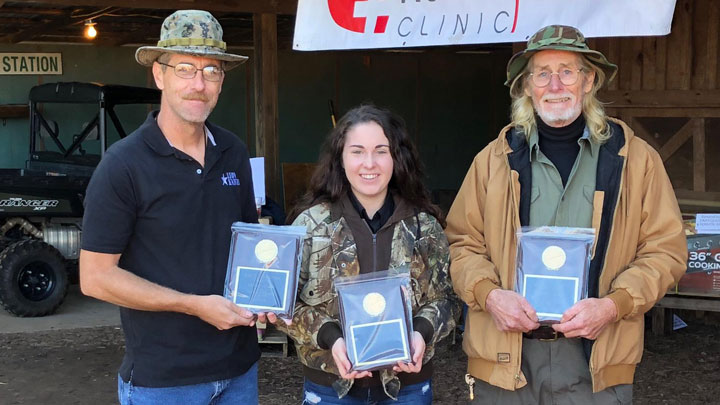 From left: The author, his friend Paige Goode and his father teamed up to take second place at the 2018 event.

While the event was not originally considered as an educational opportunity for hunters, I couldn’t help but notice the younger shooters. There are always young faces in the crowd. Last year, I estimated 20 percent of the shooters were under the age of 18. One pair of participants wore the modern flat-billed ball cap, popular with the younger generation, but instead of smart phones they carried shotguns and scorecards. It really warmed my heart to see this. The camaraderie and engagement were fantastic.

Two young men I spoke with were new to sporting clays but having a grand time of it. They were using the event to get in some shotgun practice before hunting doves. It occurred to me that this may be the ideal environment for the recruitment and retention of hunters: a fun place and time to practice firearm safety and handling skills. I place the event right up there with other efforts in Georgia to recruit and retain hunters, such as the Georgia Hunt and Learn program highlighted by this NRA Hunters’ Leadership Forum website.

I considered how clay shoots take any boredom and fickle wildlife out of the picture, both factors that can diminish hunter enthusiasm. When I was growing up, I could name 10 places that were considered free-fire zones. I could shoot anything in season, cans, paper targets and most anything floating in the pond or creek and build shooting skills through practice. Disheartened by the modern world, I had feared that those places were nearly gone and kids didn’t do that sort of thing much anymore. At each of these events through the years, I realize there are still those places and there are still those kids.

Fortunately, the rain held off during the 2019 event until everyone finished and was assembled for lunch and the awards presentation. The 75 shooters who participated raised nearly $30,000 for the clinic. Riley and the clinic’s partners were thrilled. “This is our only major yearly fundraiser and we believe we’ve found a format that well suits our community,” she said. Riley also credits this event’s record fundraising effort and its significant amount of new medical-partner support for the clinic’s bright future. Prospering under her leadership, the clinic soon will be opening a second facility. There is even talk about some extra activities being planned in advance of this year’s tournament to introduce new and novice shooters to the sport.

As community leaders and mentors in hunting and the shooting sports, we should encourage everyone to participate in these types of events, which support the community, represent hunters in a positive light and introduce or reintroduce others to our traditional outdoor lifestyle. While the NRA supports such events nationwide, it also offers training opportunities for both recreational and competitive shooters. For more information on NRA education and training programs, click here. To learn more about NRA competitive shooting programs, click here.