Nowadays we’re treated with plenty of news coming from governors’ offices, much of it negative. But here and there we see glimmers of positivity—news that makes us smile. Such is the case with Jennie Gordon, Wyoming’s First Lady, who is dedicated to making a difference by raising awareness of her Wyoming Hunger Initiative.

“Long before I became the First Lady, I learned from a friend about children in Sheridan County [Wyo.] who struggled with food insecurity,” said Gordon, in a video for the Wyoming Hunger Initiative website. “I’ve never forgotten about those children and have made it a priority to work toward a future where hunger no longer exists in our state. I hope you’ll join me with your time, generosity and innovative thinking. Together we can end child hunger in Wyoming.”

To achieve this goal, the First Lady is partnering with the Wyoming Game and Fish Commission (WGFC) to raffle two once-in-a-lifetime Commissioner's tags with all proceeds going to Food from the Field, a program enabling hunters to donate their harvest to folks who are fighting hunger. This concept isn’t new, since many hunter-backed groups around the country have been supporting wild game donations to less fortunate people for decades through the Hunters for the Hungry movement. However, the idea of offering two Commissioner’s tags to aid the effort is indeed different.

Here’s how a Commissioner’s tag works. Wyoming has seven members on the Commission. Each offers tags to nonprofit charitable organizations that are then auctioned at fundraising banquets around the state. One hundred percent of the proceeds from the auction are returned to the organization that offers them, which in this case is Food from the Field. How much do these tags typically go for in the auctions? Generally, you’re looking at a five-digit figure. The reason the tags are so highly regarded is the fact that they allow the high bidder to hunt either elk, deer or pronghorn antelope in any unit across the state during the legal hunting season for the selected unit.

As a lifelong hunter and longtime Wyoming resident, I appreciate how the Cowboy State is one of the top big-game hunting states in the West. Nonresidents must put in for a lottery draw to acquire a big-game tag. While residents are allowed to simply purchase an over-the-counter general elk or deer tag, they still must compete in a draw if they choose to try their luck at one of the limited-quota tags in the state’s top-producing units. A Commissioner’s tag requires no draw. If you acquire it, you get to choose where you want to hunt for the species of your choice. This applies to both residents and nonresidents. 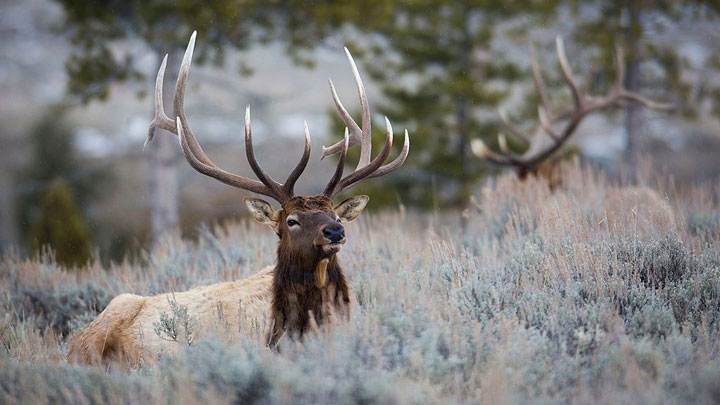 48 Hours Left to Buy a Commissioner’s Tag Raffle Ticket!
Wyoming’s Food from the Field raffle tickets cost $100 for 10 tickets. As this article goes to press, the deadline for buying a ticket for the first tag has passed, but the drawing for the second tag is this Friday, July 10. Tickets will be sold until 11 a.m. that day with the raffle held at noon. The money raised will ensure the long-term success of Food from the Field when it comes to sharing the state’s bounty with those who need it most. For more information and/or to buy your raffle tickets, visit the Wyoming Hunger Initiative website or click here.

As Wyoming’s First Lady, Gordon believes hunger is a problem that can be solved—together. “I launched the Wyoming Hunter Initiative because over 70,000 of our Wyoming neighbors experience food insecurity. That’s not okay with us.”

That figure seems astounding in a state known for outstanding big-game hunting, but it’s true. In addition to revenues from the two Commissioner’s tags, hunters can donate wild game to Food from the Field as well as make monetary donations to help pay for the cost of meat processing. CWD tests will be done on deer, elk and moose donations prior to meat being processed. (Pronghorn antelope do not contract CWD and do not need to be tested.)

Meat donation programs like this one are a win-win for sportsmen around the country. Members of the public who don’t hunt are typically in favor of these efforts, which go far in giving hunters and hunting a positive image. We need that, more than ever, in light of the anti-hunters who are attempting to eliminate all forms of hunting in our country.