Passing It On to Daddy’s Little Girl

I am a dyed-in-the-wool hunter. More accurately, I’m a dyed-in-the-wool handgun hunter. I’m also a father, who has been graced with a daughter. A wholly feminine, deviously smart, exceedingly headstrong, fiercely independent, dainty, precocious waif that is ready to get muddy at the drop of a hat. She is daddy’s girl in no uncertain terms. My wife, being of a more sensible and sensitive makeup, has attempted to delay our 6-year-old daughter Lana’s exposure to what her daddy does so frequently and fervently, in an effort to ease her into this inevitability. However, explaining the photos, books, TV shows and what I jokingly refer to as the “dead animal zoo” in the basement (where most of my mounts reside) has become a frequent topic of family discussion. We have gotten to the point where sugarcoating is not only unwarranted, it’s not working anymore. What’s a dad to do? Start grooming a hunter, of course.

Skill-wise, it started with the COVID-19 pandemic lockdown, where many of us have been forced to stay at home. We used that extra home time to make a BB gun range out of our postage stamp-sized back yard. We equipped our makeshift range with numerous recyclable targets at varying distances. Despite her diminutive stature, and the large size of the Daisy BB gun, she was able (with a little help from Dad) to consistently knock down the cans and plastic bottles with a contagious ear-to-ear grin with every pull of the trigger. My heart swelled, and the hook was set. 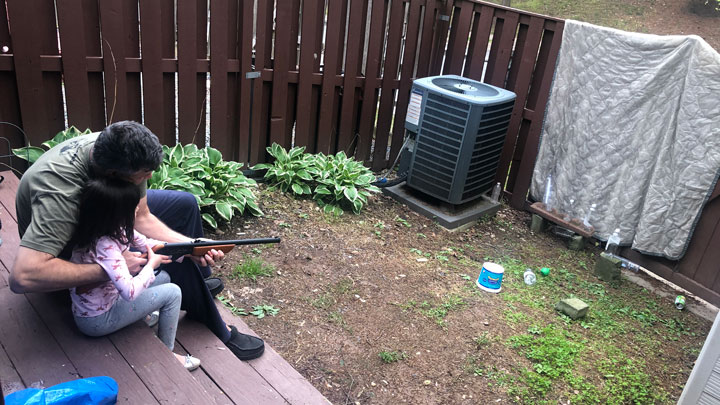 I interspersed these shooting sessions with episodes of my own hunting show, “Big Iron,” for her to get a feel for real-life hunting, warts and all. It helps that the hunts were being conducted by one of her favorite people—me. When she gets a little bigger, I will introduce her to the revolver, but that’s another discussion for another time.

We are moving on to rimfires next. I’ve acquired a .22 LR rifle with a short, child-sized stock and a scope. Marksmanship training is about to get really interesting. But with the mechanicals progressing steadily, it was time to move on to the more difficult portion of hunting, and that is justifying the kill. While it is not hard for me to justify, it is another story entirely for a child who has grown up on Disney. Ah yes, killing. “Bambi” hasn’t done much for promoting hunting. This, combined with a decidedly liberal agenda being pushed in schools and the media at large, has produced a hostile environment for hunting recruitment.

All that said, Dad is still a pig-headed former jarhead and likes these odds even when stacked against him.

The deer season arrived and three days into my quest, while calling it a day and heading back to my truck, I bumped into a large doe and a really nice buck in hot pursuit. I dropped my pack, unholstered my BFR .460 and stalked up the road in the direction the pair were heading. When I got to the intersection of another road, I caught movement in the brush on my left. Standing 20 or so yards from me was said doe, looking at me. I turned slowly while setting up my sticks, leveled the revolver and pulled back the hammer. She moved forward a step, clearing her high shoulder. At this point I sent 300 grains of jacketed hollow-point downrange, dropping the deer on the spot. The best part is that this all happened a mere 25 yards from my vehicle. I’ll take it. I fetched my gear, gutted the deer, threw her in back, called it in and took her home. We were going to skin and butcher the deer on my neighbor’s lower deck.

Lana seems really enthusiastic about hunting. With that in mind I wanted to show her the deer carcass to gauge the depth of her conviction and enthusiasm. Before seeing it, she asked if our neighbors were going to eat it. When I replied in the affirmative, she started to cry. Why? She said that if the neighbors eat it, we won’t be able to put the head on our wall. I immediately retrieved the head from the discard pile … . That’s my girl!

Anyhow, the site of the deer being butchered didn’t deter her in the least, in fact she was fascinated with the sites and the process. This is good. Disney doesn’t seem to affect her attitude here. The next step was the backstrap that was hastily slapped on the grill. That was met with a mile-wide smile. 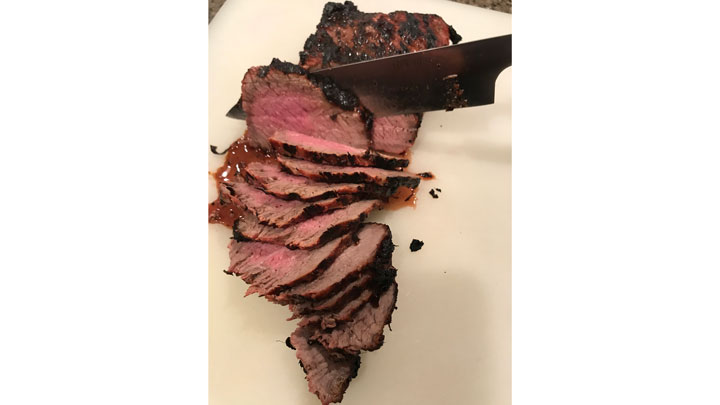 My approach from the start has not been to force anything (save for good manners) on her that doesn’t appeal. That said, with minimal input, she has gravitated toward this on her own and shows a legitimate desire to pursue the great pursuit. I have to say that I am going out of my way to explain why we hunt and that we are actually helping our environment with this time-honored activity. I don’t want her to take any of this for granted.

So what’s next? More of the same. We broke new ground and now it’s time to hone her marksmanship skills. As soon as her hands are big enough, I will slip a .22 revolver in her hand and see how she fares. So how do we change the prevailing culture? One hunter at a time. If you have an opportunity to mentor a young would-be hunter, I would encourage you to proceed. We won’t win this battle without engaging the young on a large scale. Despite having the deck stacked against us, I remain optimistic. In this hunter’s eyes, the alternative is unacceptable.

About the Author
Max Prasac is the host of the handgun hunting show “Big Iron” on Amazon Prime and RecoilTV and the author of the Gun Digest Book of Hunting Revolvers, Big-Bore Revolvers and the Gun Digest Book of Ruger Revolvers: The Definitive History. Max specializes in terminal ballistics and big-game handgun hunting and is a contributor to this NRA website and to NRA Publications’ American Hunter and Gun Digest. He is a Life member of the National Rifle Association and lives in Virginia with his family, a dog and a turtle.