Voice of Leadership: Trap Predators to Save Turkeys?

Spring in West Virginia means one thing to hunters: spring gobbler season. You see hunters buying new camo and decoys and practicing their shrill calls to attract a wild bird. But what if there are no turkeys to respond?

At the beginning of the 20th century, the wild turkey was virtually wiped from the United States. There were less than 1,000 in existence, and the population was dropping fast. Wild turkey went from one of the most widespread game birds nationwide to one on the brink of extinction. Despite the attempts of wildlife conservationists to relocate and breed the birds to restore populations in the early 1930s, along came the Great Depression and they abandoned their efforts. It wasn’t until the 1950s that attempts to restore the wild turkey took hold. Thanks to Virginian wildlife biologist Herman (Duff) Holbrook and West Virginian wildlife biologist Wayne Bailey, wild turkey still had a thread of hope. Four releases of captured turkeys were successful, and those populations took hold. Similar efforts were launched in 31 other states, marking the greatest and most successful repopulation efforts worldwide. 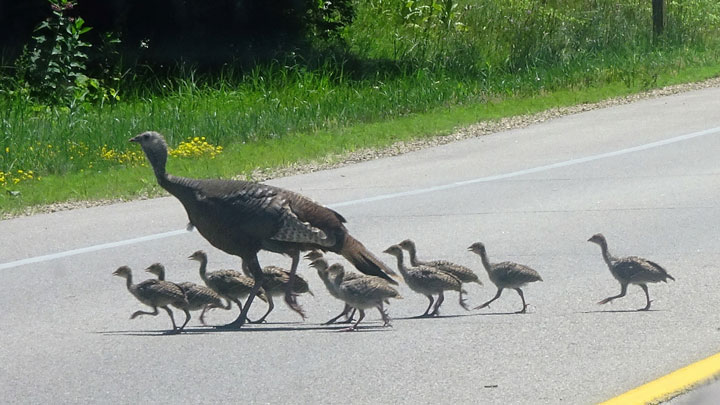 Over the next few decades, wild turkey populations continued to rise. With tremendous support from the National Wild Turkey Federation (NWTF) and hunters’ license fees, turkeys made a comeback. The population went from 1.5 million in 1973 to 6.7 million in 2013. But despite this massive gain in numbers, the population is once again on the decline. Since 2013, the turkey population dropped to between 6 and 6.2 million birds—a 15 percent decrease in population. What caused this drop?

Though there are answers from multiple sources online, I am a “show me” kind of person. I want to go out in the field and see for myself. Last year, during a spring gobbler hunt with my fellow writer and colleague Larry Case and outfitter Appalachian Outdoor Addicts (AOA), AOA spoke about the turkey populations on their farm dropping significantly. When I asked about the decline, they answered by taking me to the edge of the woods and pointing down at the turkey nest in the thicket.

There were broken turkey eggshells scattered and yolk dripping out of half-eaten eggs. “That right there is a ’coon,’” said Larry. “They demolish the nests in the spring.” Connor and Parker from AOA explained they had an extensive raccoon problem that was starting to affect their spring turkey hunts. Every year, they said they were seeing fewer and fewer turkeys in their fields. After hearing this, a lightbulb went off in my head. Back home at my small family farm, I used to see several flocks every spring. Suddenly there was no trace of turkeys, no sign in the woods or even a lone hen. Yet the habitat and food sources were still there. After talking with other local farmers and hunters, I learned they, too, were no longer seeing turkeys in the area. Why did the birds all disappear?

Then my father and I saw the eight fat raccoons captured on our game cameras and realized these masked bandits were the culprits. As we discussed the situation, he spoke to me about his trapping days. He said that trapping was how he made his money every year for school. He would set a trapline and sell the hides every year, which was during a time when they brought good money. Over time, fur prices dropped, and less people were buying furs. A trapper suddenly was lucky to get anything for his or her prime fox hide, and trapping was becoming a lost art.

The loss of the fur market contributed to the loss of the trappers. This, in turn, caused a population surge in predators such as raccoons, coyotes and foxes, all predators that prey on the wild turkey. Raccoons eat the eggs in the spring, and if any eggs survive, the coyote and fox will eat the defenseless poults.

This was when I asked my father to teach me everything he knew about trapping. I wanted to help the turkey population by doing my part to help manage predator populations. Dad taught me how to prepare and set traps and how to even skin and stretch hides. During the trapping season, we caught 12 raccoons and a possum. I plan to continue to trap next year and hopefully get more people, especially youth, to learn about trapping and its benefits to wildlife habitat and predator and prey populations alike. We also took the initiative to plant food plots for turkeys and other game. Now we are considering contacting the NWTF to see if it can stock some turkeys in the area. As hunter-conservationists, we know it is our duty as to take care of our wildlife populations and our land.

About the Author
Award-winning competitive shooter Makayla Scott is a student at Montreat College in North Carolina and a founding member of its Clay Target Shooting Team. She was introduced to shotgun shooting and outdoor pursuits at a young age by her father while on a family outing. Her achievements include serving as CZ-USA Shotgun Ambassador.