Most hunters throughout the country look upon trail cameras as fun, useful tools in their hunting arsenal to help them more effectively enjoy their increasingly limited time afield. Unfortunately for hunters in Arizona, the state game and fish commission apparently doesn’t see it that way.

Incidentally, Arizona isn’t the only state to regulate use of trail cameras but is the first with a complete year-round ban. We’ll get into that more a little later.

Kurt Davis, chairman of the Arizona commission, told Outdoor Life in a recent interview that the decision had much to do with hunter confrontations over trail cameras on public lands.

“We have multiple seasons in many units,” Davis said. “If I’m a first-season archery elk hunter, and you’re a third-season rifle hunter who keeps checking his cameras, there’s a good chance you’re going to interfere with my hunt. And as the number of hunters increases in Arizona, the chances that a hunter or guide service will be servicing their cameras for a future hunt while you are on yours will greatly escalate, and it has been escalating for the past number of years.”

However, that reasoning rings somewhat hollow. After all, the commission first banned cameras that were designed specifically so hunters would not have to visit their cameras to retrieve photos from the area. 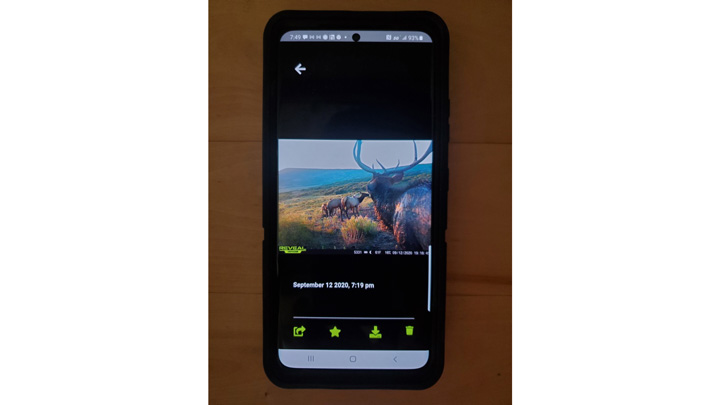 The issue was debated quite thoroughly over the past few years, and recently a compromise was set forth that would have banned the cameras only from July 1 to Jan. 31, except within one-quarter mile of a developed water source. In the end, commissioners decided to vote for the complete ban—leaving hunters with thousands upon thousands of now useless trail cameras on their hands and sporting goods retailers throughout the state with thousands of new cameras on their shelves with suddenly zero demand.

In the process of explaining the ban, Commissioner Clay Hernandez of Tucson insinuated that anyone who uses a trail camera in their hunting endeavors is not exhibiting “fair chase”—a contention many will find insulting.

“What this issue comes down to for me is the issue of fair chase,” Hernandez said. “It comes down to a question of passive surveillance or active surveillance. If we are out scouting, glassing, hiking or shed hunting, we are out in the habitat and we are providing scent, movement, patterns and sound, all of which the animals we are seeking or scouting can make use of with their resources and instincts. If we are not out there and it is just a camera, we are silent. It is that which I don’t believe constitutes fair chase.”

That is strong talk, considering the millions of ethical hunters throughout the country who use cameras and enjoy setting them out and reviewing the photos and video footage they capture.

It’s interesting to note that Arizona isn’t the only state that has banned the use of trail cameras, at least during some parts of the year. Back in 2018, Nevada instituted a law stating that a person shall not place, maintain or use a trail camera or similar device on public land, or private land without permission from the landowner, from Aug. 1 to Dec. 31 of each year. If the camera has the capability of transmitting the images or video, it shall not be used from July 1 to Dec. 31. The Nevada law also prohibits the use of trail cameras at any time if the placement, maintenance or use of the trail camera or similar device prevents wildlife from accessing, or alters the manner in which wildlife accesses, a spring, water source or artificial basin that is used by wildlife and collects or is designed and constructed to collect water.

Additionally, Montana banned the use of all trail cameras back in 2010, but the law was later changed to apply only to those that are linked to cell phones and that transmit pictures and videos remotely. Meanwhile in New Hampshire, a difficult-to-enforce law prohibits hunters from taking an animal on the same day that the trail camera images were captured. And in Alaska, wildlife officials restrict the amount of information hunters are permitted to receive from trail cameras during the hunting season.

While many oppose such bans on commonly used equipment, such laws point out the importance for hunters to always stay on top of the ever-changing regulations in all the states where they hunt. Even those who knew the regulations to the letter last season might not be aware of new rules that could govern when, where and how they pursue their favorite sport this year.

Knowing the regulations—whether you agree with them or not—is the responsibility of every true hunter. With fall soon approaching, let’s all make sure we brush up on the latest for the areas where we hunt.

About the Author
Freelance writer and editor Mark Chesnut is the owner/editorial director at Red Setter Communications LLC in Jenks, Okla. An avid hunter, shooter and field trialer, he has been covering Second Amendment issues and politics on a near-daily basis for over 20 years.